Using data from multiple telescopes, scientists have detected clouds on a gas giant exoplanet some 520 light-years from Earth. So detailed were the observations, they even discerned the altitude of the clouds and the structure of the upper atmosphere, with the greatest precision yet.

It's work that will help us better understand exoplanet atmospheres – and look for worlds that may have conditions hospitable to life, or biosignatures in their spectra. We're also getting closer to making weather reports for distant alien worlds.

The exoplanet in question is WASP-127b, discovered in 2016. It's a hot and therefore puffy beast, orbiting so close to its star that its year is just 4.2 days. The exoplanet clocks in at 1.3 times the size of Jupiter, but only 0.16 times Jupiter's mass.

This means that its atmosphere is somewhat thin and tenuous – perfect for trying to analyze its contents based on the light that streams through it from the exoplanet's host star.

To do this, a team of researchers led by astronomer Romain Allart of the Université de Montréal in Canada combined infrared data from the space-based Hubble Space Telescope, and optical data from the ESPRESSO instrument on the ground-based Very Large Telescope, to peer into different altitudes of WASP-127b's atmosphere.

"First, as found before in this type of planet, we detected the presence of sodium, but at a much lower altitude than we were expecting," Allart said.

Figuring out the composition of exoplanetary atmospheres is a tricky thing to do. That's because we can't see most exoplanets directly; we infer their presence based on the effects they have on their host stars. One of these is dimming and brightening – when the exoplanet passes between us and the star, the light from the star dims, just a tiny bit.

If it does this enough times, on a regular schedule, then that's one of the telltale signs of an orbiting exoplanet. And we can use this information in other ways, too. When the starlight passes through the exoplanet's atmosphere, wavelengths in the spectrum can be absorbed or by different elements. We call these signatures absorption lines, and we can decode them to see what's in that atmosphere. 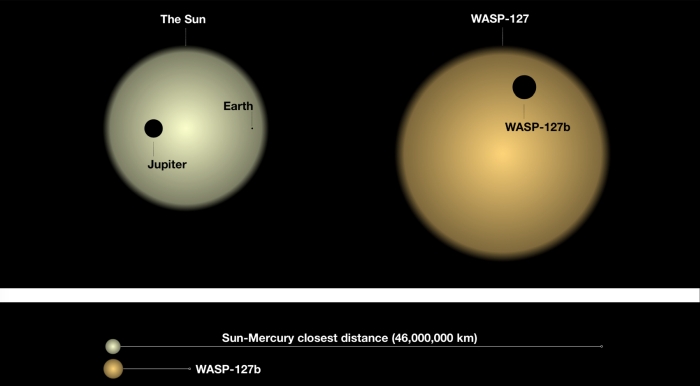 That's what Allart and his team did, using high-resolution absorption data to narrow down the altitude of the clouds to a surprisingly low cloud layer with atmospheric pressure between 0.3 and 0.5 millibars.

"We don't yet know the composition of the clouds, except that they are not composed of water droplets like on Earth," said Allart.

"We are also puzzled about why the sodium is found in an unexpected place on this planet. Future studies will help us understand not only more about the atmospheric structure, but about WASP-127b, which is proving to be a fascinating place."

The team's analysis also found some peculiar things about how WASP-127b orbits its host star. In the Solar System, where things are orderly, all the planets orbit in the direction of the Sun's rotation, in a more-or-less flat plane around the Sun's equator. This is because of the way the Solar System formed, from a disc of material swirling into the spinning baby Sun.

WASP-127b orbits not just in the opposite direction of its star's rotation, but at a very pronounced angle, almost around the star's poles. The system is thought to be around 10 billion years old, which means something strange is definitely going on in that particular neighborhood.

"Such alignment is unexpected for a hot Saturn in an old stellar system and might be caused by an unknown companion," Allart said.

"All these unique characteristics make WASP-127b a planet that will be very intensely studied in the future."

The research was published in Astronomy & Astrophysics, and presented at the 2021 Europlanet Science Congress.