We Now Know What Smashed Into Jupiter Last Month

Last month, we got the exciting news of a rare flash of light on Jupiter, bright enough to be seen through telescopes. According to a new analysis, the cause of this smash was a small asteroid, with a density consistent with meteors that are equal parts stone and iron.

The meteor exploded in Jupiter's upper atmosphere, around 80 kilometres above the cloud tops, releasing energy equivalent to 240 kilotons of TNT - just over half the energy of the 440-kiloton meteor explosion over Chelyabinsk in 2013.

The results have been presented at the EPSC-DPS Joint Meeting 2019 in Geneva. The impact was captured entirely by accident by astrophotographer Ethan Chappel on 7 August 2019.

"I believe I was looking up at the sky for Perseid meteors when it happened, so I did not see the flash while recording," Chappel told ScienceAlert.

"I only noticed it afterwards thanks to a great piece of software called DeTeCt by Marc Delcroix, which is designed specifically for finding these flashes."

Imaged Jupiter tonight. Looks awfully like an impact flash in the SEB. Happened on 2019-08-07 at 4:07 UTC. pic.twitter.com/KSis9RZrgP

Atmospheric meteor explosions - called bolides - aren't thought to be particularly rare on Jupiter, since the planet is massive and right next to an asteroid belt (although its role as a cosmic vacuum cleaner protecting Earth may have been exaggerated).

However, Jupiter is far away, and the flashes are faint and brief. Unless you're looking with the right equipment at the right time… well, it's very much blink-and-you'll-miss-it. Only a few such impacts have ever been captured on camera.

That's where the open source DeTeCt software comes in. Developed by amateur astronomer Marc Delcroix and physicist Ricardo Hueso, the software is specially designed to detect impact flashes on Jupiter and Saturn.

"I was thrilled when Ethan contacted me," Delcroix said.

"This is the first impact flash at Jupiter found using the DeTeCt software. These detections are extremely rare because the impact flashes are faint, short and can be easily missed while observing the planets for hours.

"However, once a flash is found in a video recording it can be analysed to quantify the energy required to make it visible at a distance of 700 million kilometres."

That analysis was conducted by astronomers Ramanakumar Sankar and Csaba Palotai of the Florida Institute of Technology. 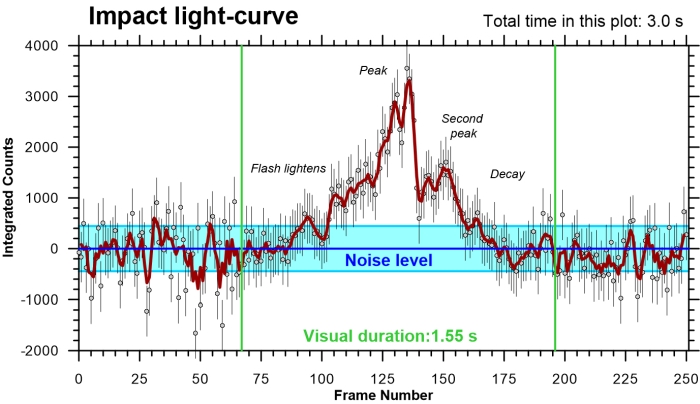 Based on the bolide flash, they determined that the object was likely 12 to 16 metres in diameter (40 to 50 feet), and had a mass of about 450 tons. The light curve (pictured above) of the explosion suggests a stony-iron composition, with equal parts meteoric iron and silicates - more likely to be, therefore, an asteroid than a comet.

This is consistent with what Hueso found, based on his comparisons with previous impact flashes detected on Jupiter.

"With six impact flashes observed in ten years since the first flash was discovered in 2010, scientists are becoming more confident in their estimates of the impact rate of these objects in Jupiter," Hueso said.

"Most of these objects hit Jupiter without being spotted by observers on Earth. However, we now estimate 20-60 similar objects impact with Jupiter each year. Because of Jupiter's large size and gravitational field this impact rate is ten thousand times larger than the impact rate of similar objects on Earth."

When it comes to Saturn impacts however, more work needs to be done. In their results, the pair noted that the DeTeCt database currently has 103 days' worth of Jupiter observations, but only 13 days' worth for Saturn - which means it's still too early to estimate impact rates on the ringed planet.

If you want to join in the impact-detection fun, Chappel posted a list of his equipment to Twitter last month for an idea of what you need to get started.