It’s huge, it’s red, and it reminds scientists of the shadowlands in The Lord of the Rings so much, it’s been nicknamed the Mordor Macula.

Now new evidence has finally confirmed what the hell that reddish-brown splodge covering the north pole of Pluto’s moon, Charon, is, and it looks like somebody’s just been caught, erm, red-handed, stealing a bunch of methane.

At half the diameter of Pluto, Charon is the largest satellite relative to its planet (or dwarf planet) in the Solar System, but that’s not the only thing going for it.

When NASA’s New Horizons spacecraft made its historic flyby of Pluto last year, it also snapped the highest-resolution images we’ve ever seen of Charon.

And they revealed a bizarre landscape of super-chilled water ice, littered with mountains, canyons, landslides, and a big red stain running across the entire north pole.

"We thought the probability of seeing such interesting features on this satellite of a world at the far edge of our Solar System was low," Ross Beyer from NASA's Ames Research Centre in California said at the time, "but I couldn't be more delighted with what we see." 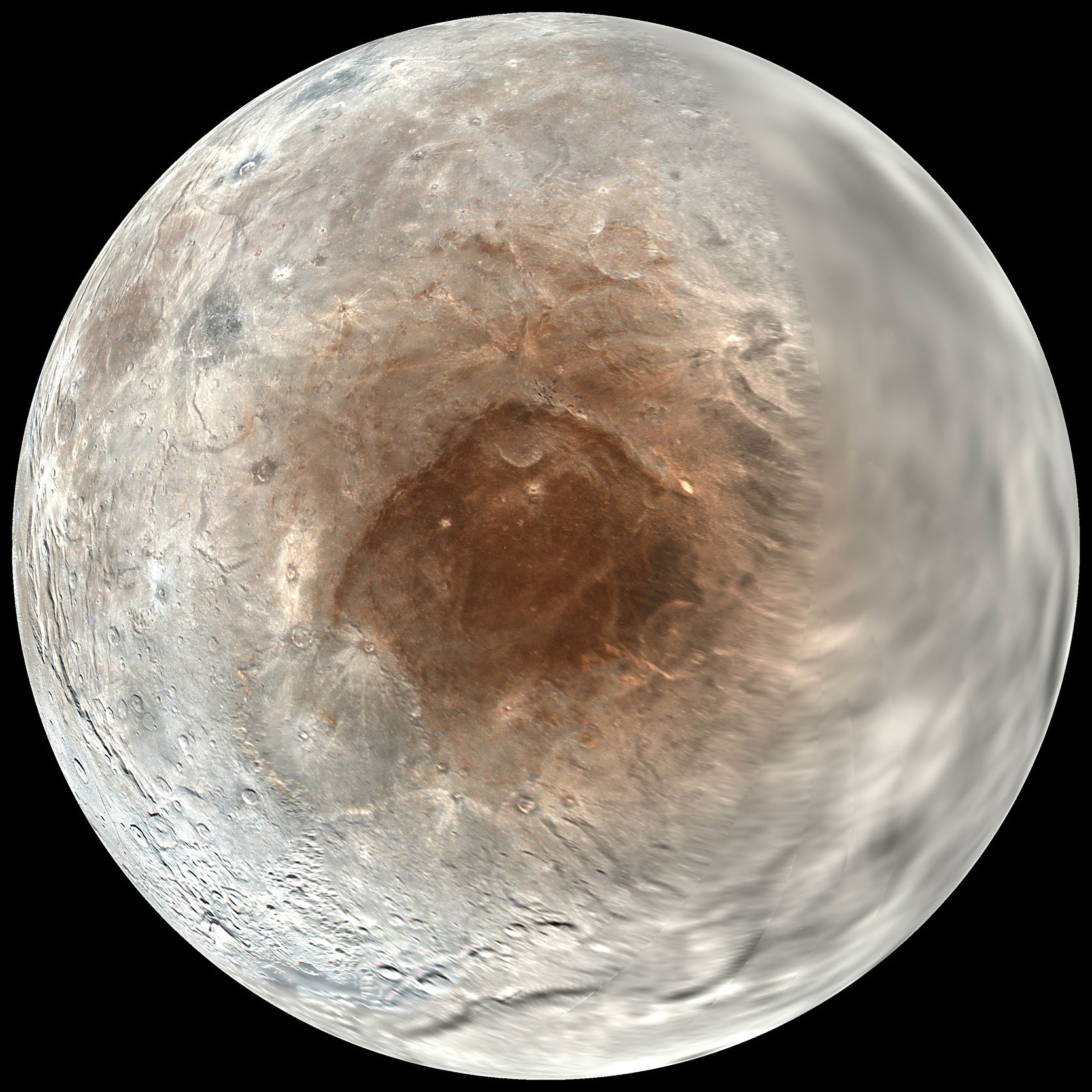 Researchers initially suspected that Charon's dusty red cap was formed from a thin residue of solid organic compounds produced by gases that have been catalysed by blasts of ultraviolet radiation and charged particles from the Sun.

But there was one big problem with that hypothesis - Pluto is the one with the gases, not Charon. So Maybe Charon was stealing Pluto’s gas?

A new model based on data captured by New Horizons has confirmed what scientists have been trying to prove over the past 12 months, and as lead researcher Will Grundy from Lowell Observatory in Arizona, told Emma Grey Ellis at Wired, "It’s kind of a convoluted chain of events."

Being a dwarf planet, Pluto struggles to retain its atmosphere, and when it gets blasted by solar winds, its gravity is too weak to keep all of its gases in place.

This means that trails of methane are regularly floating towards Charon, and while Charon doesn’t have enough gravity to hold onto its atmosphere either, it can keep about 2.5 percent of Pluto’s methane suspended.

As Ellis explains for Wired: "[T]he particles end up behaving kind of as they would in an exosphere - mostly, just bopping around following ballistic trajectories. The exception is when they bump into that icy north pole."

"The winter pole is absurdly cold, so any methane that hits it is unable to hop around like it would elsewhere on Charon. It just stays there in the cold trap," Grundy told her. "Eventually you get quite a bit of it up there."

The team estimated that during these events, about 270 billion methane molecules land on each square metre of Charon’s surface every second, and remain as a vast, thin residue.

Case closed, right? Well, not really, because although methane from Pluto appears to be accumulating on Charon’s north pole, methane doesn’t explain all that red pigment.

So back to the model.

When spring comes around and everything heats back up again, the methane should theoretically turn back into gas. But that’s not what the model showed.

As ultraviolet radiation from the Sun hit the north pole, it reacted with methane on the surface, knocking out the hydrogen, and turning it into a heavier molecule called a methyl radical that more or less stayed put.

Because methyl radical is more reactive than plain old methane, it reacts over and over again to produce bigger and heavier hydrocarbons at the pole.

"If you give it enough time, the fragments keep recombining, and you start building these large macromolecules where everything is connected in a higgildy-piggildy mess," says Grundy.

What ends up forming from all that mess is an accumulation of long-chain hydrocarbons called tholins, named after the ancient Greek word for "sepia ink" - which, you guessed it, it reddish brown.

With the values in the team's model matching what could reasonably be expected in real-life Charon, the team says this is the best explanation we have for Charon's red spot.

And what's perhaps even more intriguing than the fact that Charon is tipped in red is the fact that it got it from its dwarf planet. As Grundy told Ria Misra at Gizmodo, it's pretty unusual to see a planet do something to their moon other than inflict a little gravitational pull.

"We’re not really used to planets doing things to their moons beyond pulling on them," he said. "This is two worlds that are sharing an atmosphere in a way, which is a sort of alien setting."