Astronomers Have Discovered a Giant, Empty Cavity Lurking in Space

It may not appear so to us, but the space between the stars isn't completely empty. Tenuous and not-so-tenuous clouds of gas and dust drift in the darkness.

It's called the Per-Tau Shell, and it seems to be the product of at least one giant supernova explosion millions of years ago. It's likely that this phenomenon compressed and triggered star formation in the two molecular clouds.

"Hundreds of stars are forming or exist already at the surface of this giant bubble," said theoretical astrophysicist Shmuel Bialy of the Harvard-Smithsonian Center for Astrophysics (CfA).

"We have two theories – either one supernova went off at the core of this bubble and pushed gas outward forming what we now call the 'Perseus-Taurus Supershell', or a series of supernovae occurring over millions of years created it over time."

Mapping things in space is a tricky prospect. In two dimensions, it's pretty straightforward, but the third dimension – depth – takes a little more work. We have a number of ways of doing so, but there are gaps in our knowledge, and many uncertainties remain.

To explore the Perseus and Taurus molecular clouds, the researchers used data from Gaia, the European Space Agency's satellite observatory, which has been working since 2013 to map the Milky Way galaxy in three dimensions with the most detail and highest precision achievable. It's one of the most powerful tools we have for helping us understand the architecture – and therefore the history – of our home galaxy.

These data were analyzed using visualization software called glue, which allows scientists to create interactive 3D visualizations. From this, astronomers were able to construct 3D maps of the gas in these and other molecular clouds, appearing in a separate paper. 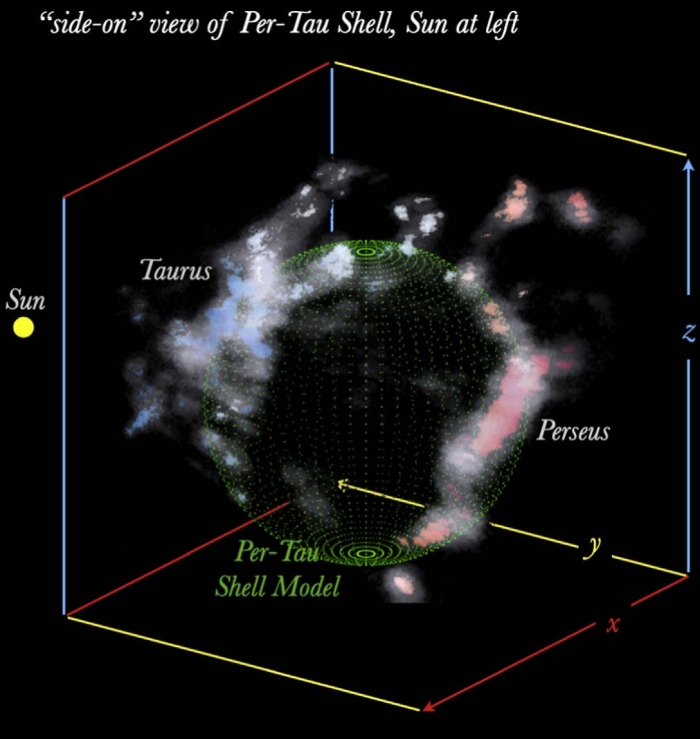 "We've been able to see these clouds for decades, but we never knew their true shape, depth or thickness. We also were unsure how far away the clouds were," said astronomer Catherine Zucker, also of Harvard-Smithsonian CfA.

"Now we know where they lie with only 1 percent uncertainty, allowing us to discern this void between them."

According to Bialy's team's analysis, the almost spherical void is likely the result of a powerful supernova explosion, sending a shockwave out in all directions into interstellar space. As this shockwave expands, it pushes into and compresses the material in the interstellar medium, sweeping it up to create a spherical shell.

This also reveals how molecular clouds can be triggered into star formation, the scientists said.

"There are many different theories for how gas rearranges itself to form stars," Zucker said.

"Astronomers have tested these theoretical ideas using simulations in the past, but this is the first time we can use real – not simulated – 3D views to compare theory to observation, and evaluate which theories work best."

Star formation is thought to occur when a denser region in a molecular cloud collapses, spinning, under its own gravity. When the shockwave from a supernova expands into the space around it, it can sweep up the gas in the interstellar medium to form molecular clouds with dense regions that then start forming stars.

This is what the team thinks happened with the Per-Tau Shell. Between 6 and 22 million years ago, their reconstruction suggests, multiple supernova events carved out a cavity in the interstellar medium. This created both the shell and the Perseus and Taurus molecular clouds. Currently, the bubble no longer seems to be expanding – it serves, now, as a monument to the cosmic circle of life.

"This demonstrates that when a star dies, its supernova generates a chain of events that may ultimately lead to the birth of new stars," Bialy said.

An interactive 3D model of the Per-Tau shell can be explored on the Harvard website. The team's paper has been published in The Astrophysical Journal Letters.