To date, we humans have positively identified over 4,000 exoplanets in the Milky Way galaxy. And, to date, all of those exoplanets have something in common: they're located in the relatively flat disc of the galactic plane, the thin disc.

Now, a little over a year and a half after it started scanning the sky for alien worlds, NASA's planet-hunting space telescope TESS (Transiting Exoplanet Survey Satellite) has identified a new first: an exoplanet orbiting a star that swoops as far as 5,870 light-years above the galactic plane.

And that's not all. It's around 1.088 times the size of Earth, which means it's probably a rocky world; and it's also an incredibly dense one. Within that Earth-sized sphere, it packs up to 8.7 times Earth's mass.

An international team of astronomers has named the planet LHS 1815b, because it orbits a star called LHS 1815, and described it in a paper accepted by The Astronomical Journal. That paper is currently available on pre-print server arXiv.

When you think of spiral galaxies such as the Milky Way, you probably think of a flat plane, the stars and gas arranged in spiral arms that orbit the galactic centre, in which sits a supermassive black hole.

Although technically these galaxies sit within a spherical halo, most of that space is relatively empty, with the bulk of mass concentrated in a flat disc. This flat shape is the result of some pretty complex physics that involves the cooling of gases as they retain angular momentum. 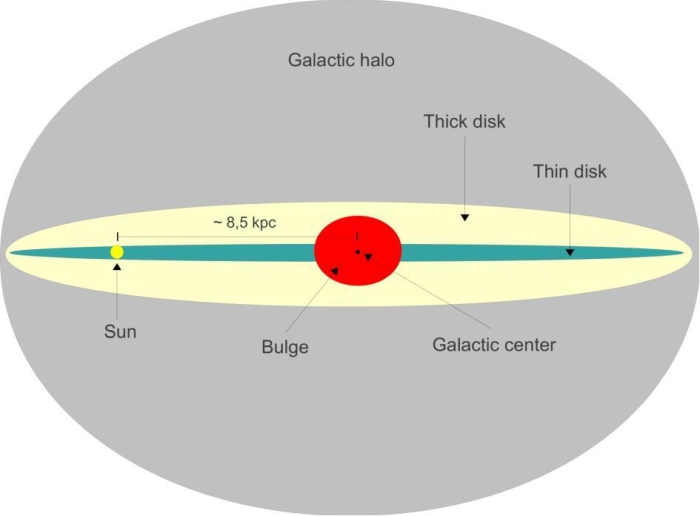 But some of these "flat" galaxies - like the Milky Way - are more complex. That thin disc - around few hundred light-years in thickness in the Milky Way - is where you will find most of the stars, and all of the gas. But there's a puffier disc around it, far thicker and more sparsely populated with stars, intermediate between the thin disc and the halo. This is called the thick disc.

Thick disc stars are almost all older than about 10 billion years (recent research suggests they were delivered to the Milky Way via a collision with another galaxy), poor in metals and rich in alpha-process elements, and moving more quickly than the thin disc stars. They have orbits that pass through the thin disc and into the thick disc, both above and below the galactic plane.

Since stars that have planets tend towards higher metallicities, it was thought that these thick disc stars may hinder the planetary formation process in some way compared to thin disc stars. And, since no thick disc planets had been found, any differences there may be in formation and evolution between thin and thick disc stars has remained a mystery.

When astronomers spotted the signature of LHS 1815b in the TESS data, the system was just 97 light-years away from Earth, but even still, it was attention-grabbing. Earth-sized, rocky exoplanets are in the minority among the exoplanets we have detected; but new exoplanets of this type are prized, because that's where we most expect to find the conditions suitable for life.

LHS 1815 is quiet for a red dwarf, but even so, and the exoplanet is close enough for such a lashing to cop some extremely harsh radiation, on a breakneck orbit of just 3.1843 days.

But when the team used data from the Gaia data release to study the motion of the star - an ongoing project to map the Milky Way, including how the stars are moving, in 3D - they realised they were looking at a thick disc star passing through.

It's currently on its way above the galactic plane; the team's calculations put its maximum distance from the plane at around 5,870 light-years. Freaking wild.

But having LHS 1815 in our neighbourhood presents a really great opportunity. We can take a closer look at the system to see if any other planets can be spotted in orbit around it. It might be possible to try to look for an atmosphere with the James Webb Space Telescope, launching (hopefully) later this year.

And now that one exoplanet has been found orbiting a thick disc star, that gives astronomers some parameters for finding other such planets. There may even be several already in the TESS data. If we can find them, they, too, could be studied to find out how exoplanets evolve in different parts of the galaxy.

"The TESS survey can provide a large sample of solar neighbourhood transiting planets across the whole sky. All planet host stars are bright enough to have their RV [radial velocity - the planet-identifying wiggle] measured by the Gaia survey," the researchers wrote in their paper.

"It will be an excellent opportunity to study the difference in the planet evolution between the thin and thick discs."

The research has been accepted into The Astronomical Journal, and is available on arXiv.