To be officially counted as a dwarf planet, there are four requirements that a piece of rock in space has to meet, according to the International Astronomical Union.

It has to be in orbit around the Sun; but not around a planet (so, not a moon); it can't have cleared the neighbourhood of its orbit; and it must have enough mass that it has attained hydrostatic equilibrium - that is, it's more or less round in shape.

There are lots and lots of bodies in the Solar System that meet the first three requirements - like, the entire main asteroid belt between Mars and Jupiter. But new observations of one of the largest chunks of rock in that belt show that, wahey - it might just meet all four!

Its name is Hygeia, and it's the fourth-largest asteroid in the belt, behind dwarf planet Ceres (945 kilometres, or 587 miles, in diameter), and asteroids Vesta (525 kilometres) and Pallas (512 kilometres). 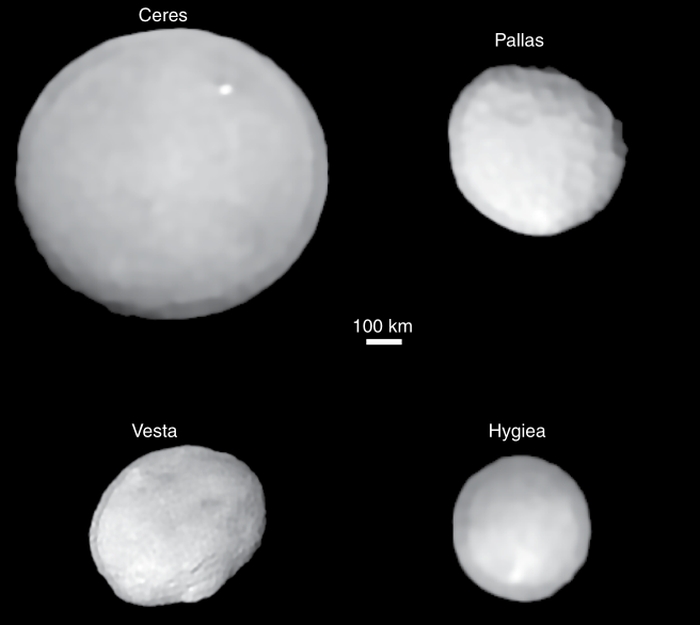 Until now, though, it was poorly studied and understood - thought to be a roughly oblong chunk of rock with diameters of 350 kilometres one way and 500 kilometres the other way, and with a giant impact crater scooped out of one side. New observations using the Very Large Telescope are now table-flipping all of that.

"Thanks to the unique capability of the SPHERE instrument on the VLT, which is one of the most powerful imaging systems in the world, we could resolve Hygiea's shape, which turns out to be nearly spherical," said astronomer Pierre Vernazza from the Laboratoire d'Astrophysique de Marseille in France.

"Thanks to these images, Hygiea may be reclassified as a dwarf planet, so far the smallest in the Solar System."

According to the new measurements, Hygiea is just over 430 kilometres in diameter, with a rotation rate of around 13.8 hours. We already knew that it had a similar surface composition to Ceres, and a similarly low density, but the new observations show it's also nearly as spherical as its larger sibling.

The lack of an impact crater, though, is truly interesting. Sharing Hygiea's orbit are around 7,000 small objects of similar compositions. Hygiea is the largest body in this group, so it's called the Hygiea family of asteroids. It's thought that the family formed about 2 billion years ago, when a large impact sent debris from Hygiea flying into an asteroid swarm.

Something similar happened to Vesta to create the Vesta family, and Vesta has the impressive impact scars to show for it.

However, after scouring the VLT images, the research team only found two unambiguous impact craters on Hygiea; teeny-tiny piddling impact craters, nothing like Vesta's giant wounds.

"Neither of these two craters could have been caused by the impact that originated the Hygiea family of asteroids, whose volume is comparable to that of a 100 km-sized object. They are too small," said astronomer Miroslav Brož of the Astronomical Institute of Charles University in the Czech Republic.

What a conundrum! But this is where computer simulations are really useful. Behold.

The team ran a bunch of simulations, and this is the scenario that produced a shape like Hygiea's, and a family of asteroids. Around 2 billion years ago, something between 75 and 150 kilometres in diameter slammed right into a large chunk of rock.

The large chunk was utterly pulverised. Bits of debris went flying off, but the main mass of hot molten chunks collapsed back together. As they cooled and hardened, they reformed into a nearly perfect sphere.

If this is what went down, it would be the only known collision like this in the Solar System. But, however it formed, Hygiea is set to change things.

It's just over half the size of Ceres, the previous smallest known dwarf planet in the Solar System. And it may be the smallest Solar System body known to have achieved hydrostatic equilibrium, which gives us a more detailed understanding of the phenomenon; at 396 kilometres in diameter, Saturn's moon Mimas isn't quite large enough, so Hygiea is cutting it close.

If it is officially designated a dwarf planet, it broadens the range of sizes at which these objects can be found, which means there could be way more dwarf planets out there than we thought, beyond the orbit of Neptune.