Astronomers Just Discovered Two of The Closest-Orbiting Twin Stars Ever

Scientists have announced the discovery of a new binary star – a star system where two suns orbit around a common centre of mass, much like the planetary neighbourhood where a hopeful farmboy called Luke Skywalker grew up a long time ago.

And this isn't just any old binary star system – these stars, called HD 133131A and HD 133131B, are the the closest-orbiting twin stars that scientists have ever found in a binary system where both the stars host planets.

In this case, HD 133131A hosts two planets, and HD 133131B hosts one. But the distance between the stars – which were detected by a team from the Carnegie Institution for Science – is extremely close.

In fact, there are only 360 astronomical units (AU) separating HD 133131A from HD 133131B. One AU is the distance between Earth and the Sun, which means that the gap between these two stars is around 54 billion kilometres (33 billion miles).

That might not sound close to you and me, but for a binary star, it's pretty intimate, all things considered, with the next comparable closest binary system having a separation of around 1,000 AU between its two stars.

The researchers who found this unusual system weren't specifically looking for binary stars, but rather traces of planets about the size of Jupiter, which are very rare.

In comparison, the most common type of exoplanets that astronomers keep discovering are super-Earths: worlds with a mass higher than Earth's but below the mass of ice giants such as Uranus and Neptune.

Scientists think that Jupiter's gravitational pull may have had a significant effect on how our own Solar System evolved, and since Jupiter-sized planets are few and far between, it's possible that finding them could help explain what sets our own corner of the galaxy apart from others.

"We are trying to figure out if giant planets like Jupiter often have long and, or eccentric orbits," said lead researcher Johanna Teske. "If this is the case, it would be an important clue to figuring out the process by which our Solar System formed, and might help us understand where habitable planets are likely to be found." 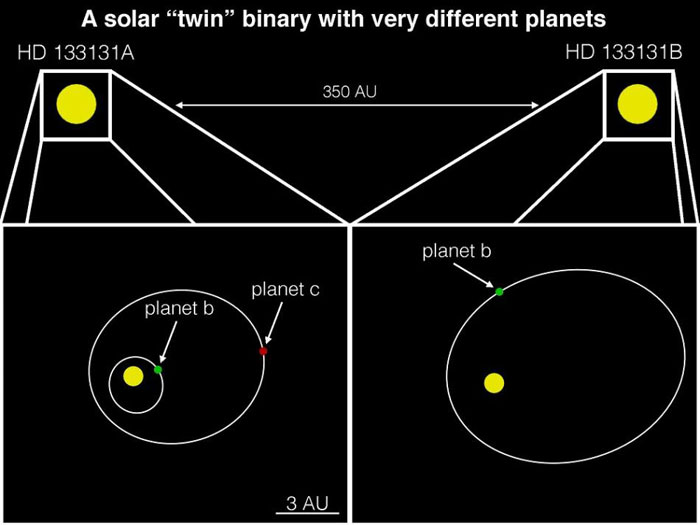 In addition to the close proximity between the two stars, another thing that makes the binary system stand out is that both stars are very 'metal poor', meaning most of their mass is made up of hydrogen and helium, instead of other elements like iron and oxygen.

But subtle differences the researchers detected in the chemical composition of the two stars mean that they're not quite identical twins, and could hint at an unusual history we don't yet fully understand.

The team suggests this chemical contrast could mean that one of the stars swallowed some baby planets back when it was young, giving it a different makeup of elements to its partner.

Alternatively, it's possible that the three large planets could have exerted a strong gravitational pull on any smaller worlds that once also belonged in the system, effectively flinging them at some point into a fiery death in one of the stars.

We won't know more until scientists have a chance to study this unusual solar system in more detail, but it's clear HD 133131A and HD 133131B still have plenty of secrets to tell.

"The probability of finding a system with all these components was extremely small," said Teske, "so these results will serve as an important benchmark for understanding planet formation, especially in binary systems."

The findings have been accepted for publication in The Astronomical Journal, but you can read them online at pre-print website arXiv.org.