Every now and again, our radio telescopes capture a mystery. A single flash, as powerful in radio wavelengths as half-a-billion Suns, condensed into a burst that lasts just a few milliseconds at most. Now, for the very first time, astrophysicists have traced one of these one-off fast radio bursts (FRBs) to its source.

"This is the big breakthrough that the field has been waiting for since astronomers discovered fast radio bursts in 2007," said astro-engineer Keith Bannister of Australia's Commonwealth Scientific and Industrial Research Organisation (CSIRO).

The signal has been named FRB 180924 - they're named for the date of detection - and it originated in the outskirts of a Milky Way-sized galaxy roughly 3.6 billion light-years from Earth.

Pinning it down could help us finally understand what causes these one-off FRBs.

It's only the second fast radio burst ever to have been traced to a location. The first, called FRB 121102, is a special case, because it bursts repeatedly. This repetition is what allowed astronomers to track it down to the star-forming region of a dwarf galaxy over 3 billion light-years away.

But the one-off bursts flash in the sky without warning, which makes them impossible to predict, and extremely difficult to trace.

Nevertheless, this is what an international team of astronomers has accomplished, using an advanced array of radio antennas called the Australian Square Kilometre Array Pathfinder (ASKAP).

By taking 10 trillion raw measurements per second across an entire patch of sky, ASKAP can detect a larger number of fast radio bursts than ever before.

Even so, usually FRBs are found after the fact, as astronomers identify them through poring over weeks' worth of these data, looking for a single measurement among the billions.

This time, the team managed to catch it in the act.

"Within about a third of a second, we realised that we had this fast radio burst that had just passed over the telescope, and so we grabbed and saved the last three seconds of data that had passed through the ASKAP dishes - about 3 billion measurements," explained astrophysicist Adam Deller of Swinburne University of Technology.

"That lets us do a live-action replay of that three seconds, over and over again, as many times as we need to."

By measuring the absolutely minuscule time delay between when the signal hit each of the 36 ASKAP dishes - we're talking billionths of a second here - the team was able to triangulate the FRB's point of origin to two dimensions in space.

Then three of the world's most powerful optical telescopes - Gemini, Keck and the VLT - were recruited to calculate the third dimension: distance.

The result was a surprise. The burst originated about 13,000 light-years from the centre of a massive galaxy about the size of the Milky Way, one that's no longer forming new stars.

You can see it in the image below - the blue and yellow blob is the galaxy, and the black circle is where FRB 180924 came from. That's a direct contrast to the source of FRB 121102, a tiny dwarf galaxy bursting with star formation. 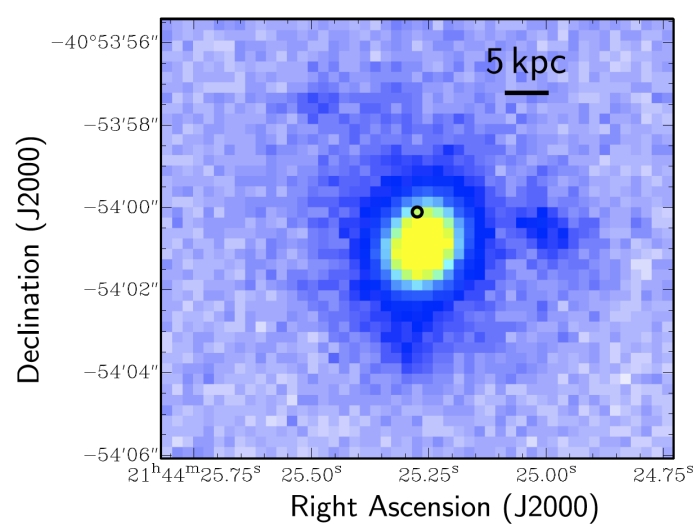 "This suggests that fast radio bursts can be produced in a variety of environments, or that the seemingly one-off bursts detected so far by ASKAP are generated by a different mechanism to the repeater," Deller noted.

The most recent research into FRB 121102 suggests its source is a neutron star, but other hypotheses include black holes, pulsars with companion stars, imploding pulsars, a type of star called a blitzar, a connection with gamma-ray bursts (which we now know can be caused by colliding neutron stars), or magnetars emitting giant flares.

But it's not just the two source galaxies that are different. The signals themselves have differences, too.

The electromagnetic signal from FRB 121102 is almost completely twisted, which means it had to travel through an intense magnetic field on the way to Earth.

"The 'young magnetar' model works pretty well for 121102 (that's what it was designed for), but it has trouble explaining our burst, in particular the fact that it comes from a galaxy with not many young stars," Bannister told ScienceAlert.

"So the theorists might need to go back to the drawing board to explain our burst by adjusting the young mangetar model, or finding a completely different explanation for our one."

The best way to figure it out is to find the sources of more fast radio bursts, which should become easier now that the team has demonstrated it's possible.

And that won't just tell us about fast radio bursts, but about the entire Universe - because the delay between the start of the burst and the end can tell us how much gas it's travelled through on its way to Earth.

In turn, that can tell us about the diffuse, hard-to-measure matter in the space between galaxies. No wonder the astronomers are so excited.