Babies May Consume a Million Microplastic Particles Each Day From Bottles, Study Finds

Microplastics can now be found in almost every environment on Earth, but scientists know surprisingly little about how the products we use every day shed these tiny plastic particles.

If you drink from a plastic water bottle or eat out of a microwaveable container today, there's a good chance that you're using polypropylene. Polypropylene is thought to be safe and suitable for lots of different applications – which is why it's the most widely used plastic in food preparation.

Another place you'd expect to find polypropylene is in baby feeding bottles. We generally assume that bottles made from this plastic are rigid and stable when they're sterilised with hot water and shaken while preparing formula.

But in new research, we've shown that baby formula preparation with polypropylene bottles exposes infants around the world to an average of 1 million microplastic particles per day.

This is an astoundingly large increase on previous estimates. Earlier studies had suggested that adults and children in the US were exposed to between 74,000 and 211,000 particles over the course of an entire year, through the food they eat, the water they drink and the air they breathe.

Like many research projects, our investigation began with a chance observation and conversation. One day a colleague was preparing instant noodles in a plastic container. The container looked rigid to start with, but after he poured hot water in it, it changed to become more malleable and soft. We were curious and wondered whether microplastics might be released in the process.

We did a quick test in our lab and found that the container released over 1 million microplastics per litre of hot water. We began testing other polypropylene containers, such as plastic bottles, with liquids at room temperature and found very few microplastic particles were released with each litre, from none at all to a few hundred. Heat, it seemed, was the problem.

We wanted to design an experiment that could test how a single polypropylene product responds to regular heating, and hit upon the idea of using baby feeding bottles. Through a survey of bottles in 48 regions and covering 78 percent of the world population, we found that polypropylene baby feeding bottles account for 83 percent of the global market.

We decided to test these bottles by choosing ten polypropylene baby bottles and following the World Health Organization's 2007 guidelines for preparing bottle feeding formula at home.

We tested how many microplastics were released while following these steps, including cleaning, sterilising and mixing liquids in each of the ten bottles, and found that they released up to 16 million particles per litre of 70°C water.

The majority of these microplastics were smaller than 20 micrometres and were flake-like with a coarse surface, and an average thickness one-tenth of their width.

When the temperature of the water was raised from the recommended 70°C to 95°C – the temperature of recently boiled water – the release of microplastics increased from six million particles per litre to 55 million. The sterilisation process alone – in which the bottle is disassembled and placed in a pan full of 95°C water – increased microplastics release by at least 35 percent.

We felt we had a really comprehensive scientific approach. We rigorously adhered to the WHO procedure, used control tests, repeated the test with different liquids and across different temperatures multiple times and used statistical analysis to determine if our results were significant.

But we also sent our methodology and sample products to an independent lab for them to verify. They came back with similar results, and so we can be confident in our findings – as shocking as they might seem.

How to reduce exposure

Given how widespread the use of polypropylene bottles is and the large quantity of microplastics released in our experiment, we decided to take our research a step further.

We estimated how exposed 12-month-old infants are likely to be in 48 regions across the world by comparing the average release rates of microplastics from feeding bottles, the market share of plastic bottles, rates of bottle feeding and how much milk babies tend to drink daily. 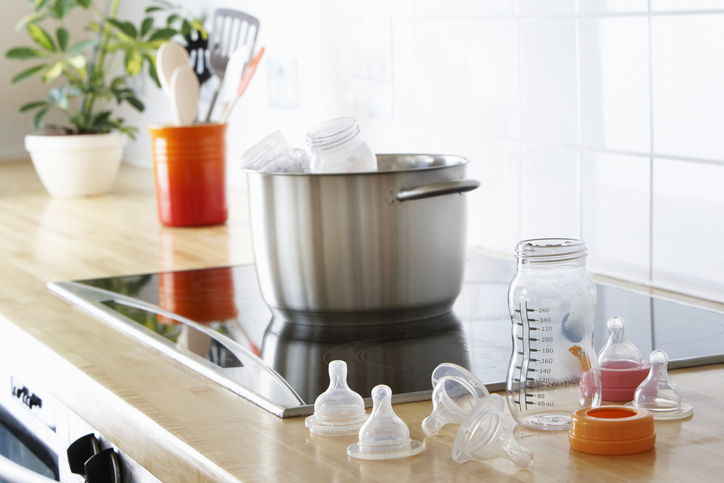 From this, we concluded that infants are likely to consume an average of 1.6 million polypropylene microplastic particles each day.

We don't want to be alarmist. We don't fully understand the risks to human health through exposure to these tiny plastic particles yet, but this is an area of research that we, and other teams, are actively pursuing.

We've also developed a set of procedures for sterilising bottles and preparing formula feeds while reducing your exposure to microplastics from polypropylene bottles. The four quickest and easiest steps are: