The way oral bacteria sets up shop in our mouths is not unlike how we humans settle into our cities, a new study has found.

There's a reason bacteria are said to live in 'colonies', and the more we learn about how these tiny architects build their communities, the more familiar their behavior seems to us.

A new study following how multiple individual settlers develop into microcolonies has found growth patterns and dynamics that mirror our own urban inclinations.

"We take this 'satellite-level' view, following hundreds of bacteria distributed on a surface from their initial colonisation to biofilm formation," says Hyun Koo from the University of Pennsylvania.

"And what we see is that, remarkably, the spatial and structural features of their growth are analogous to what we see in urbanisation."

Just as in nature, bacteria in your mouth live in complex structures known as biofilms. In fact, 99.9 percent of prokaryotes live crammed together with millions of other neighbours in one of these settlements.

Biofilms are everywhere, but if they're on your teeth, we refer to them as plaque. This dense and sticky deposit is hard to remove, thereby protecting resident microbes from environmental assaults, like toothpaste, floss or even antibiotics.

It builds up when several individual settlers develop into microcolonies, but exactly how this happens remains underexplored.

Using the oral bacterium Streptococcus mutans, researchers have shown that microbial cells settle at random and regardless of the surface type. Nevertheless, only a subset of colonisers actually begin clustering, expanding their scope "by amalgamating neighboring bacteria into densely populated microcolonies."

"We thought that the majority of the individual bacteria would end up growing," says Koo. "But the actual number was less than 40 percent, with the rest either dying off or being engulfed by the growth of other microcolonies."

Once the clusters arise, something really curious happens: they begin to interact with one another, growing and organising into densely populated "micron-scale microcolonies that further expand and merge" to form a biofilm superstructure.

This sort of cooperation is interesting, as previous studies have reported bacterial competition in other species, especially when there was a scarcity of nutrients.

In this case, the nutrients only impacted the actual forming of the colonies. After that, "the individual microcolonies (distant or in close proximity) continued to grow without disruption until merging with each other, and the merged structures behaved and grew like a single new harmonised community," the researchers write.

Only when more antagonistic foreign species were introduced did it affect that seemingly peaceful unit, and the growth of the microcolonies was lowered.

"These communities (microcolonies) can expand and merge with each other in a collaborative fashion, without competition between adjacent communities," the authors conclude. 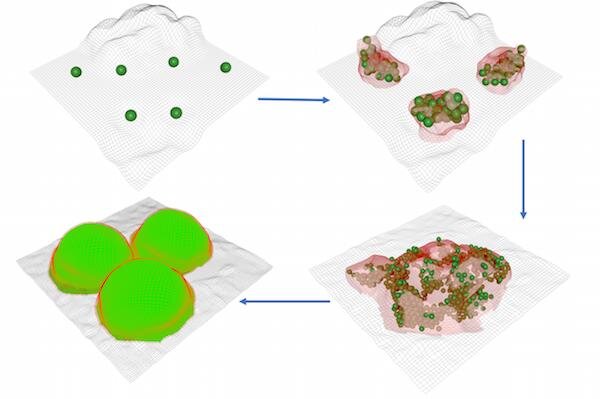 It's the type of growth that indicates "communal behavior between microorganisms", and it looks similar to human urbanisation, where some settlers stay static, while others grow into villages that further expand into densely-populated microcolonies or cities, which then merge into microbial megacities.

Of course, there are limits to this idea of bacterial urbanisation. The authors aren't saying microbes build traffic signs, roads and supply lines, but the general idea is the same and it can not only help us tackle infections better, it might also help us build more sustainably.

"It's a useful analogy, but it should be taken with a grain of salt," Koo says. "We're not saying these bacteria are anthropomorphic. But taking this perspective of biofilm growth gives us a multiscale, multidimensional picture of how they grow that we've not seen before."