It's a hot day. A bee buzzes over for a drink at a nearby pond, but oh no! Her wings just made contact with the water's surface; now she's stuck, and aerodynamics is no longer an option. Is it certain death?

According to scientists' best estimates, the bee has only minutes before gravity threatens to pull her into the depths.But that's plenty of time – given a unique biolocomotion strategy bee kind appears to have evolved.

In a new study, researchers at Caltech have identified a handy survival tactic honeybees (Apis mellifera) can use to escape exactly this kind of soggy predicament: propelling themselves through the water by using their wings to generate a wave – a behaviour that's never before been documented in insects.

"The motion of the bee's wings creates a wave that its body is able to ride forward," says bio-mechanics engineer Morteza Gharib.

"It hydrofoils, or surfs, toward safety." 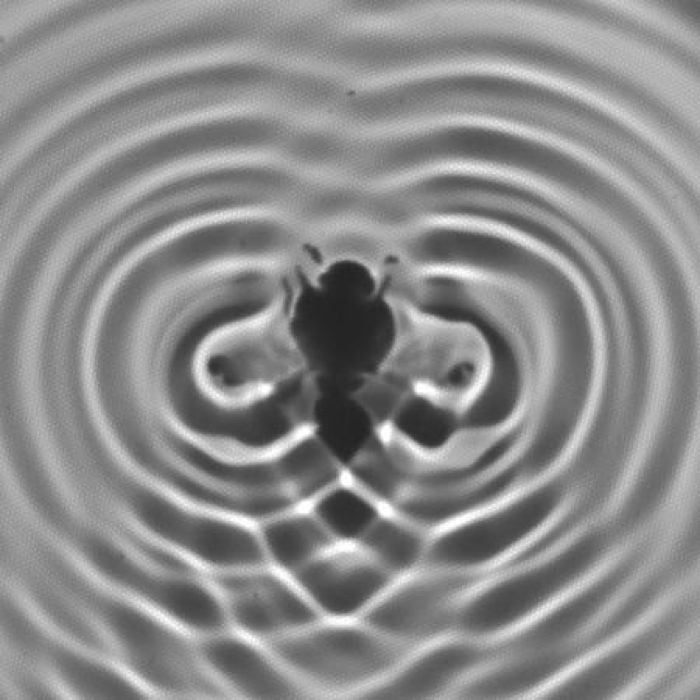 The genesis of this strange discovery lay in a chance observation by Gharib's co-author, research engineer Chris Roh, who one day just happened to observe a bee stuck in water in a still pond on the Caltech campus.

As Roh watched, he saw the bee's beating wings generate tiny ripples behind it on the pond's surface. Was this intentional, and if so, how did it work?

To get a better idea of the physics, Roh promptly yanked the bee (now an unwitting research volunteer) out of the water, and took it to the lab.

There, with Gharib, the two scientists studied it – and 32 other individual bees – in experiments where their water flapping could be studied up close.

Recording the bees flailing about in a pan filled with water, and filming the activity with slow-motion cameras – the researchers observed the secret of the bee's pond exit strategy.

"Honeybees use their wetted wings as hydrofoils for their water surface propulsion," the researchers write in a paper about the phenomenon.

"Their locomotion imparts hydrodynamic momentum to the surrounding water in the form of asymmetric waves and a deeper water jet stream, generating ∼20-μN average thrust."

(That's approximately 20 millionths of a Newton in terms of force, meaning it's actually a pretty energy-efficient way of getting around on the water.)

Other insects like mayflies and water lily beetles use a different kind of locomotion on the water called surface skimming. Bees can't do the same, however, because when their wings touch the water, the underside of the wing sticks to it, and they can't flap against the surface with enough force to clear the water.

Fortunately, the hydrofoil technique – aided by the way bees angle their wings while flapping up and down (to alternately maximise then minimise contact with the water, as they push then retrieve their wings) is enough for them to propel themselves along at three body lengths per second.

The experiments revealed that honeybees can't sustain the hydrofoil motion indefinitely, however – after about 5 minutes, they seemed to show signs of muscle fatigue (probably because of how much harder it is to flap your wings against liquid water than air).

Nonetheless, in a small-enough pond at least, that's probably long enough to surf to safety, then simply climb out when you reach terra firma.

"When bees were placed on the surface of a local pond, they were able to locomote to the shore and pull themselves out of the water," the authors write.

"Once out of the water, they dry themselves for a short time and fly away."