The official verdict is in. As the red supergiant Betelgeuse once again returns to normal brightness levels, astronomers have taken the star's temperature to identify the cause of its recent dimming.

It turns out the star wasn't fluctuating internally; rather, Betelgeuse sneezed out a huge cloud of dust, which obscured its light for a while.

This means that the star isn't, as some had hoped, about to go supernova; in fact, it's a pretty well-understood event for a star of Betelgeuse's advanced age.

"We see this all the time in red supergiants, and it's a normal part of their life cycle," said astronomer Emily Levesque of the University of Washington.

"Red supergiants will occasionally shed material from their surfaces, which will condense around the star as dust. As it cools and dissipates, the dust grains will absorb some of the light heading toward us and block our view."

Betelgeuse caught the attention of astronomers late last year when it started plummeting in brightness. Between September 2019 and January 2020, its brightness dimmed significantly - enough to be noticeable with the naked eye.

This caused a bit of a kerfuffle. Because Betelgeuse - only about 700 light-years away, in the constellation of Orion - is one of the brightest stars in the sky. It's very old, for its kind - around 8 to 8.5 million years old. In fact, it's in the final stages of its lifespan: Betelgeuse is dying.

The ancient star's main-sequence days of fusing hydrogen in its core are done; it ran out of hydrogen some time ago, and is now fusing helium into carbon and oxygen.

Eventually, Betelgeuse's core will fuse heavier and heavier elements, ultimately resulting in a buildup of iron that will cause the core to collapse - and the old star will explode in an epic supernova. 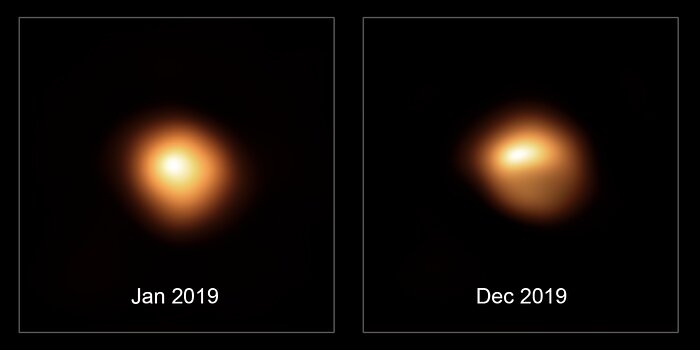 One of the signs of such an explosion being imminent is a dramatic dimming of the star, but astronomers have predicted that Betelgeuse is still at least a few tens of thousands of years from the point of erupting into a supernova.

So you can see why its recent shenanigans had everyone intrigued, especially since its dimming was lopsided - occurring only on a part of the star.

Hypotheses included some internal convection process that was cooling the star's surface. (This would be pretty weird.) Another possibility was a giant cloud of dust and gas ejected by the star as it loses mass.

Hence, astronomers were looking very closely. On February 14 this year, they took observations to obtain Betelgeuse's spectrum - a breakdown of light by wavelength that can tell us a lot about a star's chemistry. A star such as Betelgeuse would usually be too bright for a detailed spectrum, but the researchers used a special dampening technique to reduce the light to a workable level.

One of the things a spectrum can reveal is the temperature of the star, through analysis of what we know as 'spectral lines'. Emission lines on a spectrum indicate where light is being emitted, while absorption lines indicate where it is being absorbed; we know that different elements have specific lines, and these can be used to infer the star's temperature.

What the researchers were looking for were the absorption lines of titanium oxide, which can accumulate in the upper layers of cool giant stars. Abundance of titanium oxide correlates with the temperature of the star.

It's also significantly warmer than would be expected for convection processes.

"A comparison with our 2004 spectrum showed immediately that the temperature hadn't changed significantly," explained astronomer Phillip Massey of Lowell Observatory.

"We knew the answer had to be dust."

Last month, after the team had taken their observations, Betelgeuse stopped dimming and started brightening again. So supernova is once again off the table, for now.

But the glinting red star still represents an excellent opportunity to learn more about the late stages of a giant star's lifespan, so you can bet astronomers will keep studying it closely.

The research has been accepted into The Astrophysical Journal Letters and is available on arXiv.