For the first time, scientists with the National Oceanic and Atmospheric Administration (NOAA) have formally identified a new species of undersea creature based solely on high-definition video footage captured at the bottom of the ocean.

And what an undersea creature it is. Meet Duobrachium sparksae – a strange, gelatinous species of ctenophore, encountered by the remotely operated vehicle (ROV) Deep Discoverer during a dive off the coast of Puerto Rico.

That encounter took place back in 2015, but when you're laying claim to discovering a wholly new species – based solely on video evidence, for that matter, with no physical specimens to help make your case – it helps to do your due diligence. 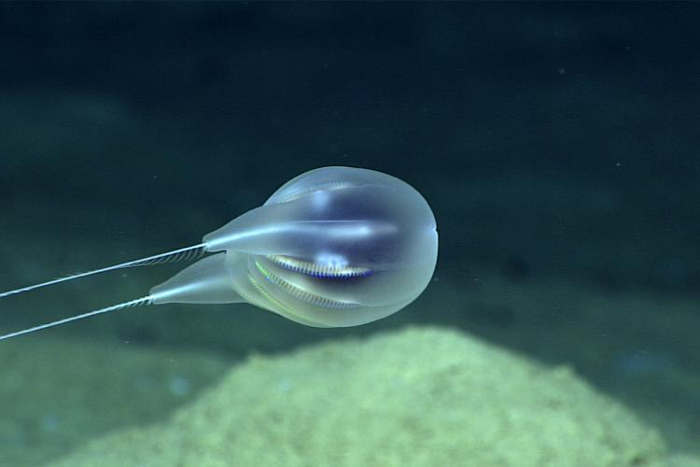 Luckily, Deep Discoverer's cameras – the footage of which you can see here – were up to the job, capable of picking up subtle details on D. sparksae's body less than a millimetre long.

Subsequent analysis of the organism – now detailed in a new paper – indicates it's easily distinguishable from all other known ctenophore species, the researchers say.

"It's unique because we were able to describe a new species based entirely on high-definition video," explains NOAA marine biologist Allen Collins.

"We don't have the same microscopes as we would in a lab, but the video can give us enough information to understand the morphology in detail, such as the location of their reproductive parts and other aspects."

Those aspects are manifold. From a distance, D. sparksae's most notable feature is its bulbous, balloon-like body, but it also features two prominent tentacle arms.

In total, three different individuals were filmed by the ROV at depths of around 3,900 metres (almost 2.5 miles down), with one of the animals appearing to perhaps be using its tentacles to anchor itself to the seabed.

"It was a beautiful and unique organism," says oceanographer Mike Ford.

The other specimens might not have been touching the seabed, but all three of the animals were spotted within two metres of it, in a feature called the Arecibo Amphitheater, which lies within an underwater trench known as the Guajataca Canyon.

It's in these very deep parts of the ocean where ctenophores are found, but the extreme depth of their natural habitat means we don't encounter these mysterious animals – let alone new species – very often.

Ctenophores go by a number of common names, many of which seem almost comical: comb jellies (named after their 'combs' of fine cilia) is the most popular, but they have also been referred to as sea gooseberries, sea walnuts, and Venus's girdles. 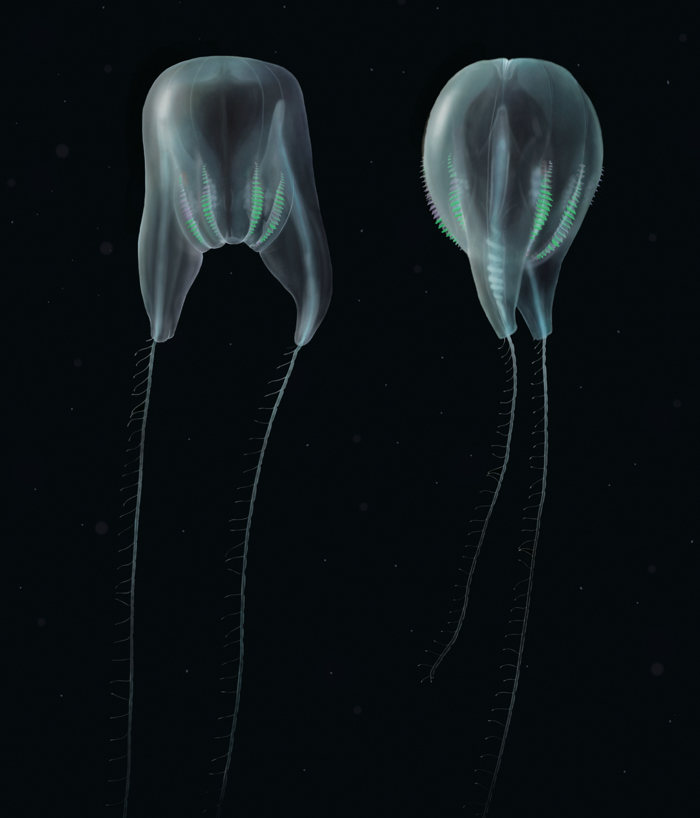 While the animals can superficially resemble jellyfish, they are not closely related. Ctenophores, which are carnivorous, subsist on small arthropods and various kinds of larvae.

Up to about 200 species have been described to date, with about one new species being found each year on average, and most discoveries rely on video capture methods for the basis of physical descriptions, given the difficulties of collecting specimens.

"This presents somewhat of a conundrum because taxonomy relies heavily upon physical type specimens preserved in museums to serve as references to which other material can be compared," the researchers explain in their paper.

"Indeed, the idea of using photographic evidence to establish new species has been highly contentious in recent decades."

Luckily, given the high-definition footage the team got of these three fine specimens of D. sparksae, the researchers say they didn't get "any pushback" about their species discovery.

While the team hopes to collect specimens on future dives for physical analysis, they say it might be decades before they have the chance to run into the comb jelly again.

For D. sparksae's sake, that might be for the best: bringing a gelatinous blob up to sea level, when it normally resides about 4 kilometres under the ocean's surface, can be a messy affair.

"Even if we had the equipment, there would have been very little time to process the animal because gelatinous animals don't preserve very well," Collins says.

"Ctenophores are even worse than jellyfish in this regard."

The findings are reported in Plankton and Benthos Research.