Black holes are so weird and so mysterious, it's possible we're never going to unravel all their puzzles. But this new one is pretty fantastic - the first evidence that supermassive black holes at galactic cores actively shape their environments, something suspected but never before confirmed.

Not just that, but they way they do so - by generating powerful winds that blow far and wide - influences where new stars form. This means the influence exerted by black holes reaches much farther than expected, right into the far reaches of their galaxies.

That supermassive black holes blow powerful winds into the space around them is well known. There may be no air in space, but there is plasma, gas and other matter in the interstellar medium.

Previous studies have concluded that these winds, which are powerful enough to spread throughout entire galaxies, can suppress the formation of new stars across the region.

This new study marks the first time this phenomenon has been observed.

"Understanding why and how galaxies are affected by their supermassive black holes is an outstanding puzzle in their formation."

The black hole in question is visible as part of a quasar, in host galaxy 3C 298 some 9.3 billion light-years away.

This means the phenomena we're detecting happened quite early in the history of the Universe, which is around 13.8 billion years old. 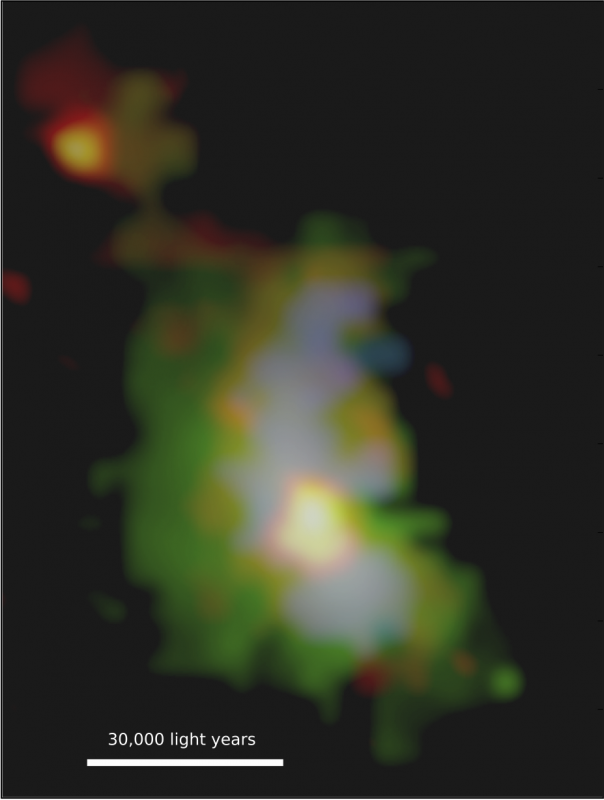 Image of the quasar host galaxy (A. Vayner and team)

The black hole itself can't be seen, since no light escapes it, but it's in the centre of a large accretion disc of dust and gas that is swirling around the black hole at tremendous speeds.

This generates friction and heat, which gives off immense light. In fact, quasars are some of the brightest objects in our universe.

In the image above, the green colours highlight the energetic gas across the galaxy that is being illuminated by the quasar, while the blue colour represents powerful winds blowing throughout the galaxy.

The supermassive black hole itself is in that orange-bordered bright circle slightly below the middle of the image.

The quasar stage of a galaxy's life is usually the early, very active stage, before the black hole settles down into a more conventional adulthood, having consumed all the nearby matter.

Using data from the Keck Observatory's infrared spectrograph OSIRIS and the Atacama Large Millimeter/submillimeter Array, the research team found that it has 100 times less mass than expected, given the size of its black hole.

Putting together the pieces of the puzzle, this indicates that the black hole was formed and established well before the galaxy coalesced around it.

They also observed quasar-driven winds changing the density of molecular gas, lessening it considerably - clouds of which are vital to stellar formation. This means that the quasar was limiting star formation.

The findings are the first results from a survey on distant quasars, and the effect they have on galactic growth and star formation. But even though it gave up magnificent evidence of a long-suspected mechanism, there's still work to be done.

For example, it's still unclear whether quasar galaxies can be included in the scaling models used for nearby galaxies.

It's also unclear how stellar formation can occur, since the quasar's winds have removed most of the necessary gas from the galaxy. The team proposes that a galactic merger, or gas from the intergalactic medium, will bring the galaxy up to the mass expected for the size of its black hole.

"The most enjoyable part of researching this galaxy has been putting together all the data from different wavelengths and techniques," said one of the team, astronomer Andrey Vayner.

"Each new dataset that we obtained on this galaxy answered one question and helped us put some of the pieces of the puzzle together.

"However, at the same time, it created new questions about the nature of galaxy and supermassive black hole formation."

The team's research has been published in The Astrophysical Journal.