A vast mass of hot rock is welling up underneath Vermont and extending into other subterranean regions below New England, new research shows.

Scientists used a network of thousands of seismic measurement devices in the largest geological study of its kind, detecting the enormous blob upwelling under Vermont, New Hampshire, and Massachusetts – and possibly elsewhere.

"The upwelling we detected is like a hot air balloon, and we infer that something is rising up through the deeper part of our planet under New England," says geophysicist Vadim Levin from Rutgers University – New Brunswick.

Since New England doesn't have any active volcanoes, the huge build-up is thought to be a geologically recent phenomenon, although in this case that means it could have slowly but steadily been growing for tens of millions of years. 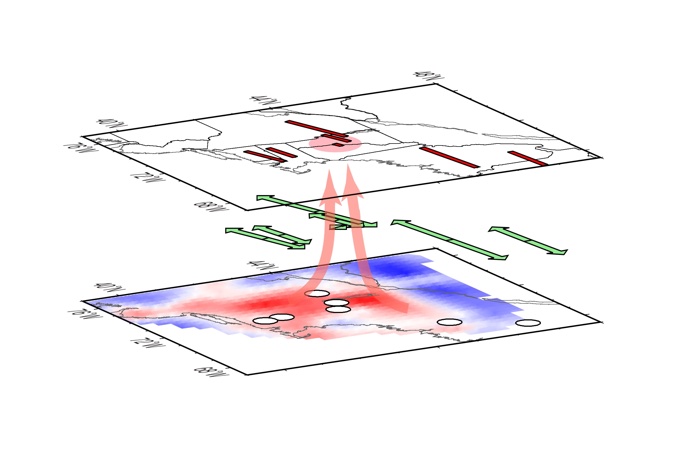 As for whether the mass could one day erupt, that's the way these things go, the team says – although there's no point in panicking, since such an eventuality is still a long, long way off from happening.

"It will likely take millions of years for the upwelling to get where it's going," Levin explains.

"The next step is to try to understand how exactly it's happening."

Buried in two years of data, the team zeroed in on New England, having previously identified a thermal anomaly that was hundreds of degrees Celsius hotter than its surroundings in the upper mantle about 200 kilometres (124.2 miles) below the surface, and measuring approximately 400 kilometres (248.5 miles) in diameter.

"It is a very large and relatively stable region," says Levin, "but we found an irregular pattern with rather abrupt changes in it."

Using new readings of seismic waves travelling through Earth's underground, the team suggests the blob is welling directly under central Vermont, but it extends into western New Hampshire and also western Massachusetts.

The researchers acknowledge the mass may travel beyond these states, although they're unable to tell from the data they used in this study. That said, as enormous as this blob is, compared to other volcanic masses churning under the continental US, it's no giant.

"It is not Yellowstone (National Park)-like, but it's a distant relative in the sense that something relatively small – no more than a couple hundred miles across – is happening," explains Levin.

There's still a lot to learn about this mass and its behaviour, but the researchers say their findings challenge what we think we know about geological conditions under this Atlantic margin of North America – and how passive we wrongly assumed it to be.

"[W]e did not expect to find abrupt changes in physical properties beneath this region," says Levin, "and the likely explanation points to a much more dynamic regime underneath this old, geologically quiet area."

As dynamic as it looks to be, this rising blob of hot rock still has a long journey ahead if it wants to one day reach the surface and graduate to being a proper volcano.

Whether that's an actual possibility, nobody really can say for sure just yet.

"Maybe it didn't have time yet, or maybe it is too small and will never make it," Levin told National Geographic.

"Come back in 50 million years, and we'll see what happens."