During the last Ice Age, more than 10,000 years ago, the bridge between North and South America was guarded by a daunting array of beasts, including a wolf-like carnivore and the largest bear ever to roam the Earth.

An ancient graveyard, buried at the bottom of an underwater cave in Mexico, has turned up not just the skull of a large, short-faced bear (Arctotherium wingei) and the bones of a wolf-like dog (Protocyon troglodytes), but also the skeletons of ancient sloths, tapirs, sabertooth cats, cougars, elephant-like gomphotheres, bears, dog-like animals, even a couple humans more than 12,000-years-old. 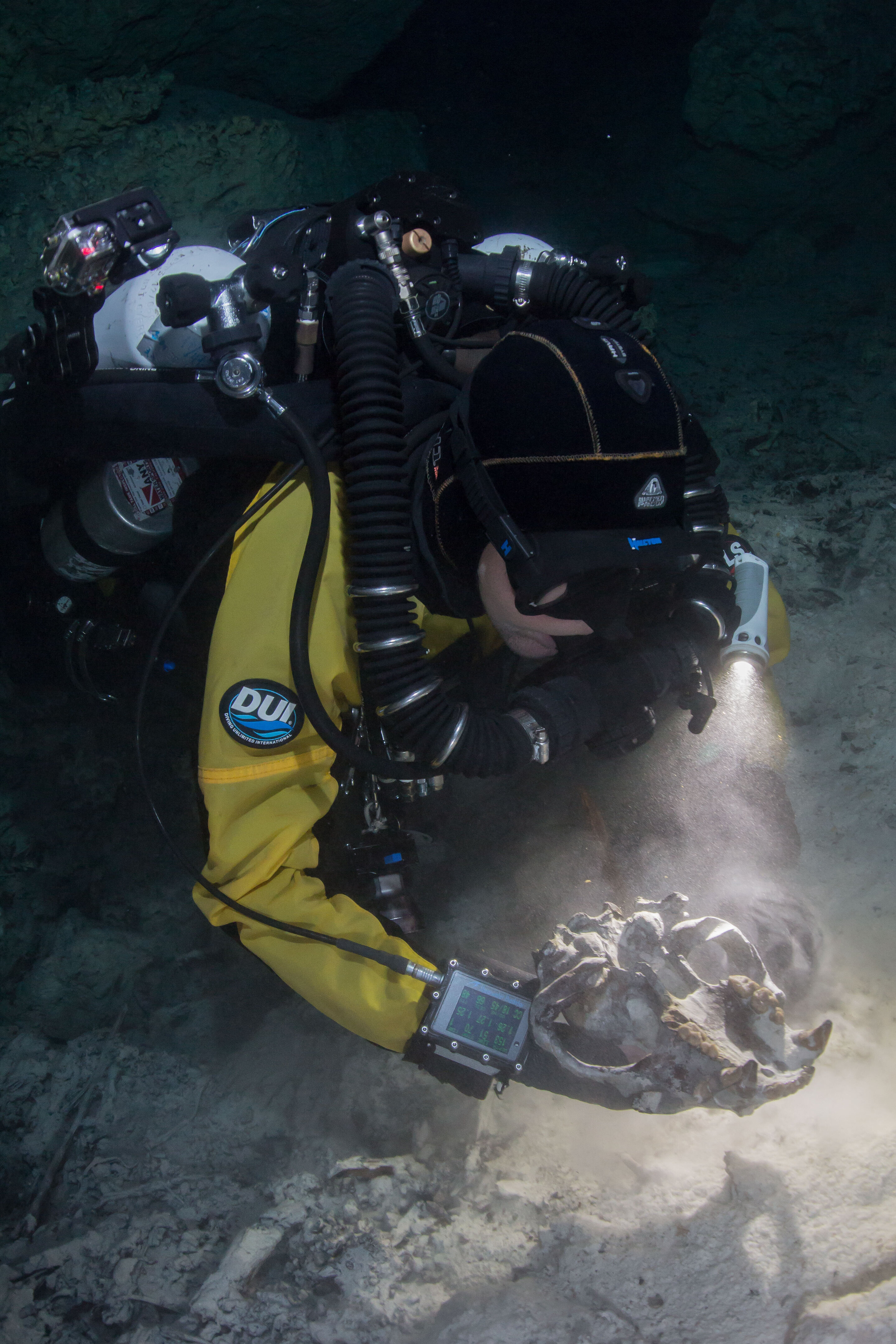 Described by researchers as "an underworld of exquisitely preserved fossils", they were found in the Hoyo Negro pit in the Sac Actun cave system on the eastern coast of the Yucatán Peninsula. Hoya Negro means " black hole" in Spanish, and the pit is a natural time capsule from the Late Pleistocene.

That's because thousands of years ago, the eponymous black hole was a bone dry death trap for unsuspecting animals.

Falling nearly 60 metres to their deaths (200 feet), the cave fooled many an ancient species into its clutches, and as melting glaciers filled the pit, their stay in the depths became permanent.

Looking over the collection of bones gathered in the past 12 years, researchers from the US and Mexico were most impressed by the giant bear and wolf remains, which were collected some years ago but were previously misidentified.

Finding bones in the tropics of Central America is already a rarity, but the discovery of these two species in particular was a shock. Up until now, scientists thought the short-faced bear and wolf were only found on the continent below, more than 2,000 kilometres away.

"The whole previous record of this particular type of bear is just known from a few localities in South America, and those are fragmentary remains," lead author and paleontologist from the East Tennessee State University, Blaine Schubert, told Live Science.

During one of the many cross-over events between North and South America, these two predators might have stopped to smell the flowers, ultimately making their home in the lush region.

Another possibility, the authors write, is that after making it all the way south, the creatures moved north once again, during or after the last full glacial event, between 35,000 and 12,000 years ago.

"Their presence along with a diverse sloth assemblage suggests a more complex history of these organisms in Middle America," they write.

"We suggest that landscape and ecological changes caused by latest Pleistocene glaciation supported an interchange pulse that included A. wingei, P. troglodytes and Homo sapiens."

Indeed, among the many skeletons found in this exquisite cave system, the most exciting discovery came in 2007 when researchers found two human skeletons, one of which was a teenage girl who lived approximately 13,000 years ago.

These are some of the oldest human skeletons ever found in the Western hemisphere, and evidence that our ancestors once used to live alongside a diversity of giant ground sloths, towering bears and fierce wolf-like carnivores.

This study has been published in Biology Letters.