In one of the most significant exoplanet discoveries to date, NASA just announced that not one, but seven Earth-sized planets have been found orbiting the habitable or 'temperate zone' of a star just 39 light-years away.

Research suggests at least the inner six planets appear to have Earth-like masses, are made of rock, and have surface temperatures ranging between a life-friendly 0 to 100°C (32 to 212°F). NASA is calling it a 'sister solar system' to our own, and says several of the planets could potentially host liquid water, and maybe even extraterrestrial life.

NASA made the announcement in a live press conference after triggering much speculation over their big "discovery beyond our Solar System".

The new exoplanets have been detected orbiting an ultracool dwarf star called TRAPPIST-1, which is located about 39 light-years away from our Sun in the Aquarius constellation.

Astronomers led by Michaël Gillon from the University of Liège in Belgium first detected three exoplanets around the star back in May 2016, using Earth-based telescopes.

But it wasn't until the team studied it more closely using NASA's Spitzer space telescope that they discovered an additional four planets in the system.

Initial estimates based on these observations suggest that at least five of the planets have masses similar to Earth, and follow-up observations by the Hubble Space Telescope indicate that they probably have rocky compositions.

At least three also appear to fall within the temperate zone of their star - which means their surface temperatures are most likely to be between 0 and 100°C (32 and 212°F), making liquid water, and potentially even some form of extraterrestrial life, a possibility.

Because of the system's structure, it's also possible that any of the planets have liquid water.

The European Space Observatory is calling it "the most incredible star system to date". 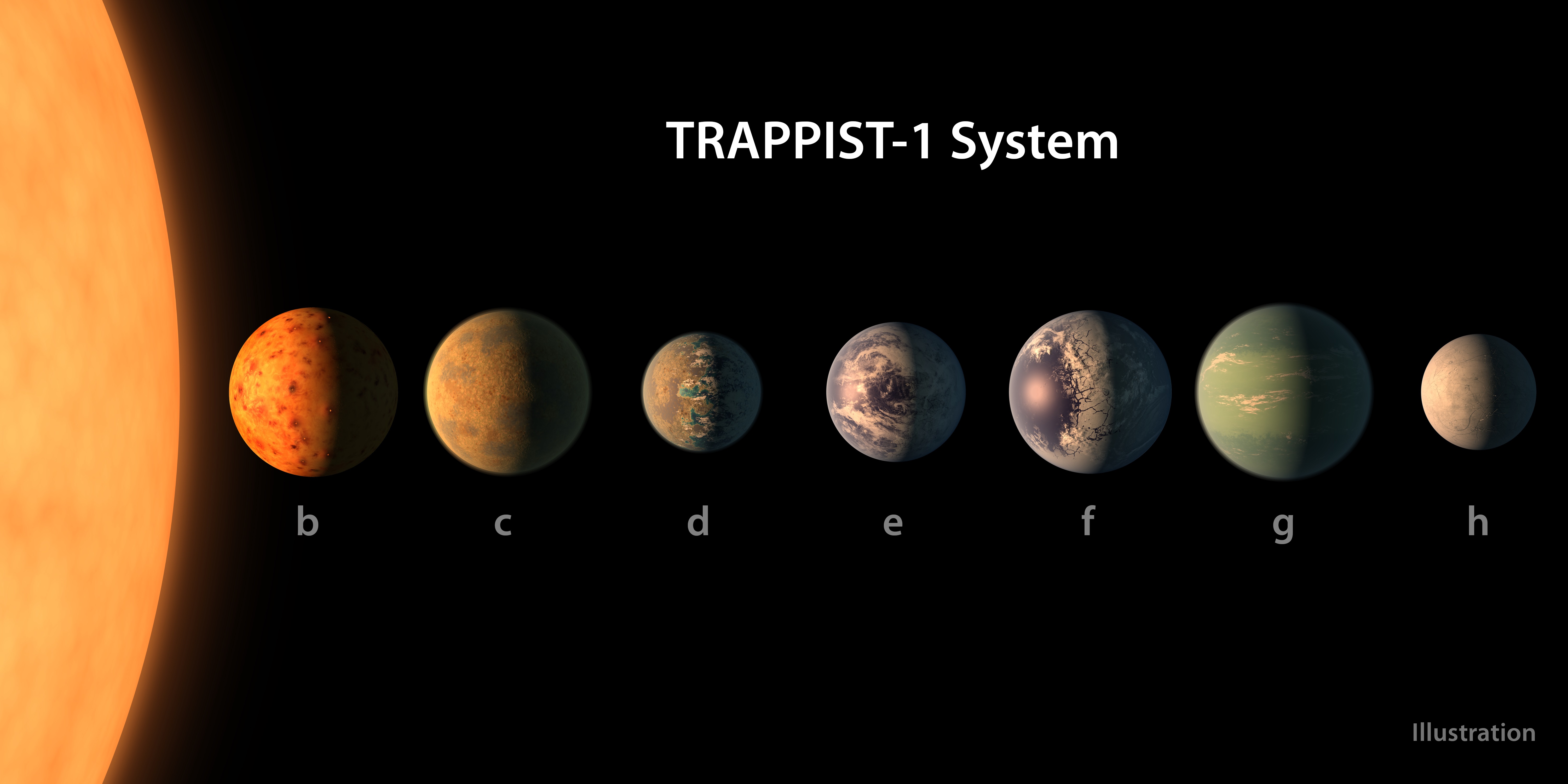 Before we get too excited, the researchers stress that there's still a lot more research and analysis to be done - particularly on the seventh, outermost planet, which has only been observed orbiting the star once.

Because of that, we still don't know how long that seventh planet takes to orbit TRAPPIST-1, or how it interacts with the inner planets.

And the entire system is so far away, we can't say for sure as yet whether it hosts water, or is a good place for life to exist.

But from what the researchers can tell, not only are at least three of the planets potential homes to liquid oceans, the entire system actually seems to be have a lot in common with our own.

"The TRAPPIST-1 system is a compact analogue of the inner Solar System," the authors write in Nature.

You can see a comparison of the inner Solar System compared to the TRAPPIST-1 system below: 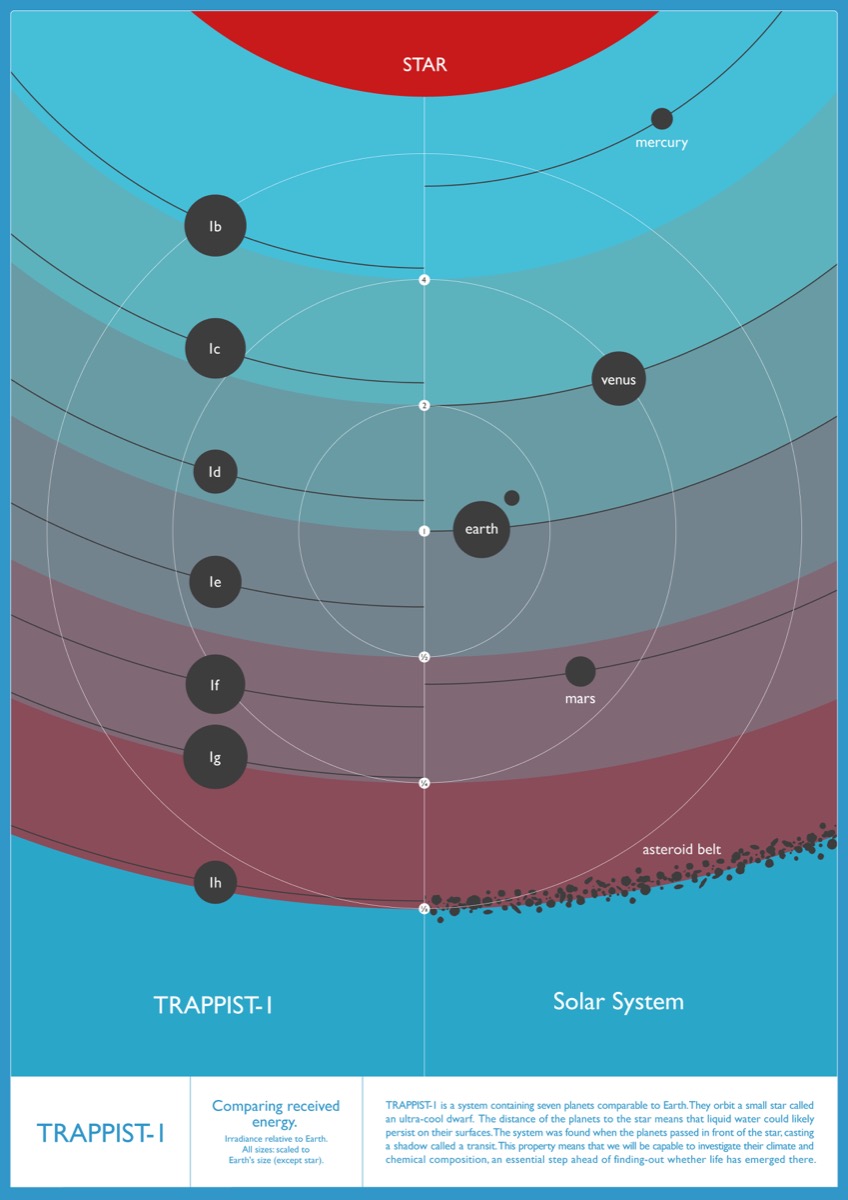 But despite the familiarities to home, there are some big differences between our systems.

The whole system is pretty compact too, with the closest planet only taking 1.5 days to orbit its star. The sixth planet takes 13 days.

That means that if you were standing on the surface of one of these planets, the neighbouring planets in the sky would at times appear larger than our Moon does to us. 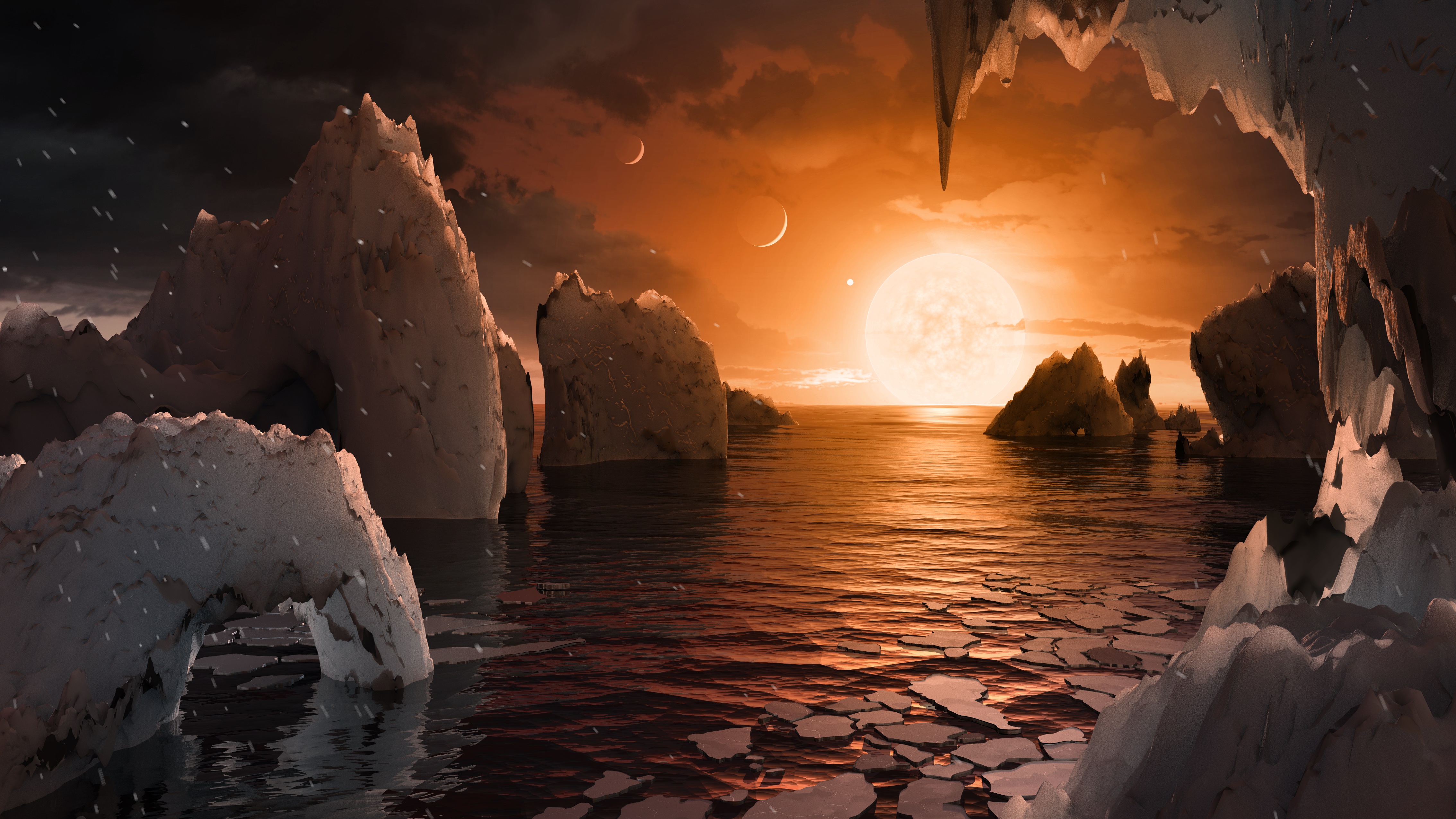 Because of this, it's thought that the planets might all affect each other, and could even be tidally locked, with one face constantly pointed towards their star, in the same way that Jupiter's moons always have one side locked towards the giant planet.

That tidal locking could also do some strange things to the temperature gradients on the planet, which NASA says makes it possible that liquid water could exist on any of them under the right conditions.

But perhaps even more exciting about this discovery is what it means for the likelihood of other Earth-like planets out there in our galaxy.

"In the past few years, evidence has been mounting that Earth-sized planets are abundant in the Galaxy, but Gillon and collaborators' findings indicate that these planets are even more common than previously thought," Ignas A. G. Snellen, an astronomer from the Leiden University in the Netherlands who wasn't involved in the research, writes in an accompanying opinion piece in Nature.

He explains the significance in more detail:

"From geometric arguments, we expect that for every transiting planet found, there should be a multitude of similar planets (20 to 100 times more) that, seen from Earth, never pass in front of their host star.

For now, we can only speculate on what these seven incredible Earth-like worlds would be like. But the best part about all of this is that in the not-so-distant future, we might actually be able to know more.

With the NASA James Webb Space Telescope scheduled to come online next year, researchers should be able to get a better idea of the composition and atmosphere of this sister solar system.

And when the European Space Organisation's Extremely Large Telescope goes live in 2024, it should actually be able to detect water on the distant worlds from right here on Earth.

If you want the wonder of this discovery put into perspective, here's Sean Carey, the manager of NASA's Spitzer Science Centre, to fill you with awe about the galaxy we live in:

You can see our live updates from during the briefing below:

12.51pm ET: Here's what we know so far. All NASA has said is that the press conference will "present new findings on planets that orbit stars other than our Sun, known as exoplanets".

The briefing participants are:

12.57pm ET: NASA is doing well with the suspense this morning…

12.58pm ET: I love that 20,000 other people around the world are live streaming the conference right now, too. Hi guys!

1.03pm ET: NASA has discovered not just one, but seven exoplanets similar to Earth orbiting a single star! Whoa.

1.05pm ET: Thomas Zurbuchen: "I'm in awe today … There are actually seven Earth-sized planets orbiting the nearby TRAPPIST-1 star about 40 light-years away. Three of these planets are in the habitable zone where liquid water could pool on the surface."

1.06pm ET: "For the first time we've found this many terrestrial planets around a single star… The discovery gives us a hint that finding a second Earth is not just a matter of it, but when," said Zurbuchen.

1.09pm ET: Sean Carey: "This is the most exciting disovery we've had yet wih Spizter in almost 14 years of discovery."

1.15pm ET: Sara Seager is telling us that the fact that all the planets in the TRAPPIST-1 system are potential hosts of liquid water means it's an incredibly exciting target to study and visit further. If one planet isn't "quite right" its sister might be.

1.18pm ET: Thomas thinks the worlds will be far more beautiful than the illustrations we can come up with. "The fact that there are other worlds out there just like the Earth and have some commonality with the Earth … these questions about 'are we alone' are being answered in these decades and the next decades."

1.21pm ET: Most questions asking about the number of exoplanets that are potentially habitable that we've found so far, and whether we have confirmation of water on the TRAPPIST-1 planets as yet. Answer: no, but we're looking.

1.22pm ET: TRAPPIST-1 is a very young star, so it should have more longevity than our own Sun.

1.23pm ET: Oh good question, do the planets have any names as yet? Nothing official, but they've got some ideas… Interestingly, there's no official way to give names to exoplanets like we do asteroids.

1.26pm ET: Fascinating question about whether these planets might all have the same biosphere because they're so close together. We don't know as yet, but it's something worth investigating.

1.30pm ET: Okay, our site went down for a while there, guys. Thanks for the patience, and thanks for watching with us!