For a guy who basically helped usher in the digital age as we know it, Steve Jobs didn't necessarily look like he was going to set the world on fire back in 1973.

At the time, the late Apple co-founder – who would have turned 63 last week – was just an 18-year-old college dropout who liked to tinker on technology projects with his pal Steve Wozniak.

Apple was still years away, and Jobs needed an income to help fund his lifestyle (and rent). So, with nothing else for it, he filled out a one-page application form – which you can see in full below – for an unknown job.

By traditional standards, it's pretty bad.

The chaotic, slapdash application – which will soon be up for bidding at auction house RR Auction – is filled with silly errors and spelling mistakes from a candidate who went on to become one of the 20th century's greatest tech visionaries. Jobs is sometimes mentioned as having had dyslexia, although he never confirmed this. 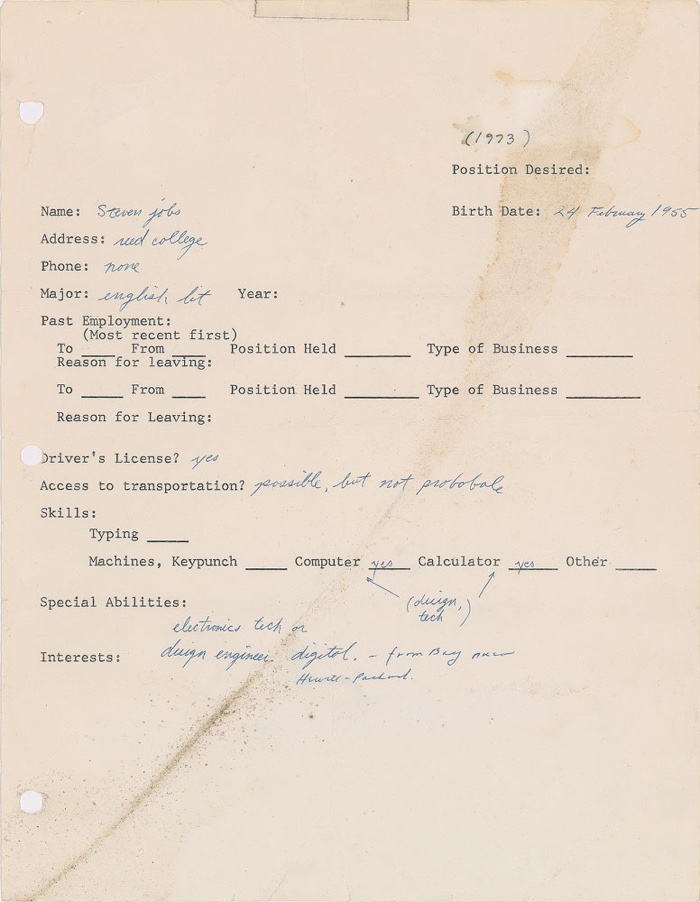 In the middle section of the application – where candidates are required to list previous employers, including beginning and starting dates, position held, type of business, and reason for leaving – Jobs leaves the entire section completely blank.

Below that, he writes "yes" to indicate he has a driver's licence, but his answer to the next question is somewhat more ambiguous.

Nonetheless, the incipient seeds of the great tech thinker begin to take shape in the all-important skills section, where he signals "yes" to having both computer and calculator skills – but then messes things up a bit by writing "(design, tech)" underneath this, and drawing a couple of arrows on the page.

For someone who would go on to be singled out as a master of interface design, he sure knew how to not fill in a form properly.

All in all, it's not a particularly strong application – and it's not clear if Jobs was successful in scoring the gig, although it appears pretty unlikely.

The next year, Jobs would pack his bags and travel to India, before returning home to help Wozniak design circuit boards for Atari.

Then came the Apple I, the Apple II, the Mac… and eventually, the later Macs, plus the iPhone and iPad – which many of you are probably reading this article on.

The moral of the story? Well, we're not altogether sure.

It could be that Steve Jobs was really sloppy and inattentive to direction in his youth. (Or that the application shows signs of his rumoured dyslexia.)

But the real message here is that if you want something badly enough, it doesn't matter how many spelling mistakes you make, or how many embarrassing failures you've had along the way.

If you're determined and you believe in yourself, anything is possible, and you should never feel down or ashamed or hopeless when life doesn't go your way.

As the man himself famously said in his beautiful, inspiring, and epic Stanford commencement address:

"Your time is limited, so don't waste it living someone else's life… Stay Hungry. Stay Foolish."