NASA just gave out a new round of grants for its favourite up and coming innovative space projects – one of which is a plan to fit a 1 kilometre (3,281 foot) radio telescope inside a crater on the far side of the Moon.

The Lunar Crater Radio Telescope (LCRT) would be able to measure wavelengths and frequencies that can't be detected from Earth, working unobstructed by the ionosphere or the various other bits of radio noise surrounding our planet.

Should the plans for the LCRT become a reality – and the new grant money could get it closer to that – it would be the largest filled-aperture radio telescope in the Solar System. 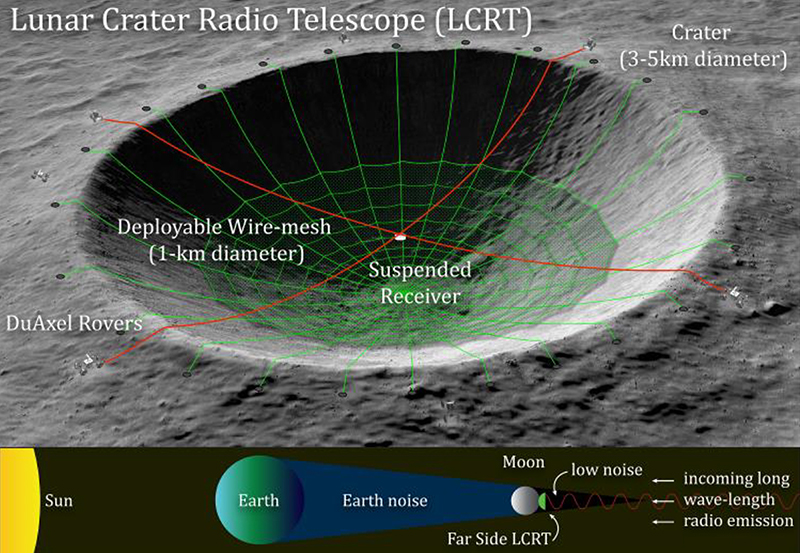 "LCRT could enable tremendous scientific discoveries in the field of cosmology by observing the early universe in the 10–50m wavelength band (6–30MHz frequency band), which has not been explored by humans to date," writes robotics technologist Saptarshi Bandyopadhyay of the NASA Jet Propulsion Laboratory (JPL) in his project outline.

As per the plans, Moon rovers would pull out a wire mesh some 1 kilometre across, inside a lunar crater than could be up to 5 kilometres (3.1 miles) in diameter. A suspended receiver in the centre of the crater would complete the system.

Everything could be automated without any human operators, which would in turn mean a lighter and less expensive payload for the project to literally get off the ground.

This is still at the very early stage of planning, and it's not clear yet exactly which crater would be used for the job, but it's an intriguing concept that we'll be keeping an eye on in the years ahead.

The biggest radio telescope here on Earth is the Five-hundred metre Aperture Spherical Telescope or FAST, which has a 500 metre (1,640 foot) diameter. Should the LCRT eventually get put together, it would be twice as wide. 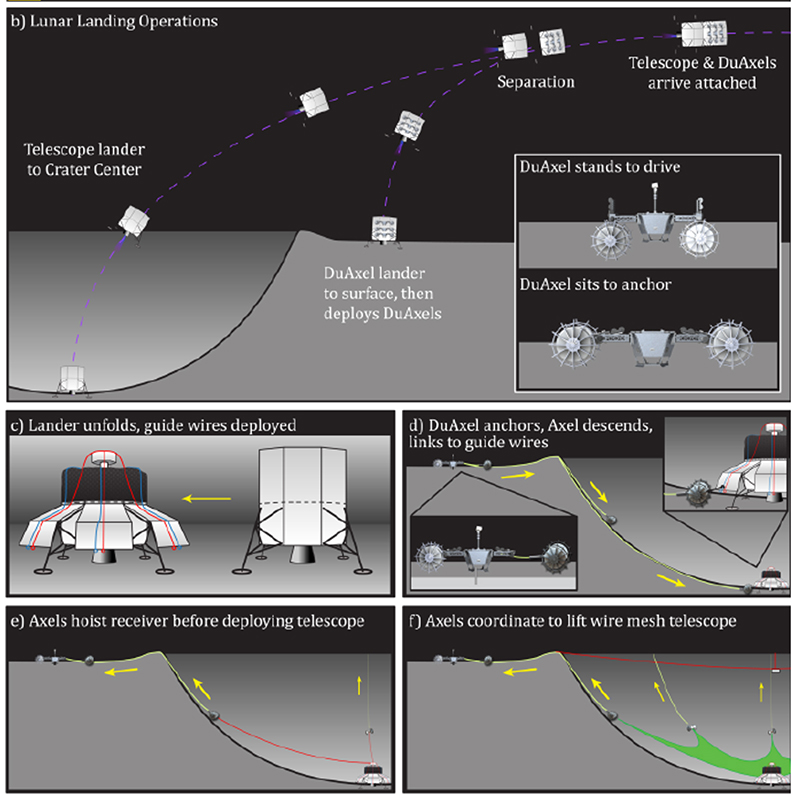 The LCRT would be installed by rovers. (Saptarshi Bandyopadhyay)

FAST is already proving its worth, having already picked up mysterious fast radio bursts or FRBs from the depths of space. The LCRT proposed here has the potential to pick up many more phenomena.

There's now such an abundance of low Earth orbit satellites, listening to the cosmos from the surface of our planet is becoming increasingly difficult.

Working at low frequencies in the 6 to 30MHz frequency band, the lunar crater telescope could perhaps tell us more about the earliest days of the Universe.

China and the Netherlands have already set up a radio telescope on the far side of the Moon, albeit a much smaller one. This telescope uses satellites to relay data back to Earth, like the LCRT will have to, if we pull it off.

The team behind the concept now has nine months and up to US$125,000 of NASA money to see if they can develop it further. Let's hope they're successful.

"Building the largest filled-aperture radio telescope in the Solar System on the far-side of the Moon is bound to create a lot of public excitement," Bandyopadhyay and his colleagues write in a 2018 paper on the idea.

"We envisage that this concept would unlock the potential for ground-breaking scientific discoveries in radio astronomy in wavelengths that are hitherto poorly explored by humans so far."