A new image from the ESA's Mars Express spacecraft shows how beautiful, and desolate, Mars can appear. It also highlights some of the natural process that shape the planet's surface.

The image is of the northern polar region, and it features bright patches of ice, deep dark troughs, and evidence of storms and strong winds.

Of all the planets in the Solar System, Mars' seasons most closely resemble Earth's, although the Martian year is about twice as long as Earth's. The north pole goes through many changes throughout the seasons. The region is covered in layers of ice that experience subtle shifts in both their composition and extent.

Thick layers of water ice cover the region throughout the year. Then in winter, when the temperature drops to extremes of -143°C (-225°F), carbon dioxides freezes and precipitates out of the thin air, forming a layer of frozen carbon dioxide on top of the water ice.

At the same time, carbon dioxide clouds also form, and they can conceal the ground below from orbital view.

The HRSC is a powerful, full-color camera that is imaging the entirety of the Martian surface. Overall, it captures images at about 10-meter resolution.

Within the HRSC there is another channel called the Super Resolution Camera (SRC) that can capture images at an even greater resolution of 2.3 meters/pixel of 2.35 km sq. The SRC is used on select areas of Mars.

"The strength of HRSC is to perform high resolution digital terrain models of the martian surface in order to provide topographic context for the geoscientific evaluation of surface processes in space and time," says Ralf Jaumann, HRSC Principal Investigator from the Institute of Planetary Research, DLR, Berlin, Germany.

The leading image is an HRSC image of the northern polar cap in the summer of 2006. The image shows the whites of the polar ices and the browns and reds of Martian dust.

The red and brown troughs look like they're cutting through the ice, and they're actually part of a larger spiral pattern of troughs that radiate outwards from the center of the north pole. From above, they look like kind of like a pattern of zebra stripes.

At the same time, the planet is rotating, creating the coriolis effect. So rather than form straight troughs emanating from the pole, they create a spiral pattern that radiates out from the center of the north pole. 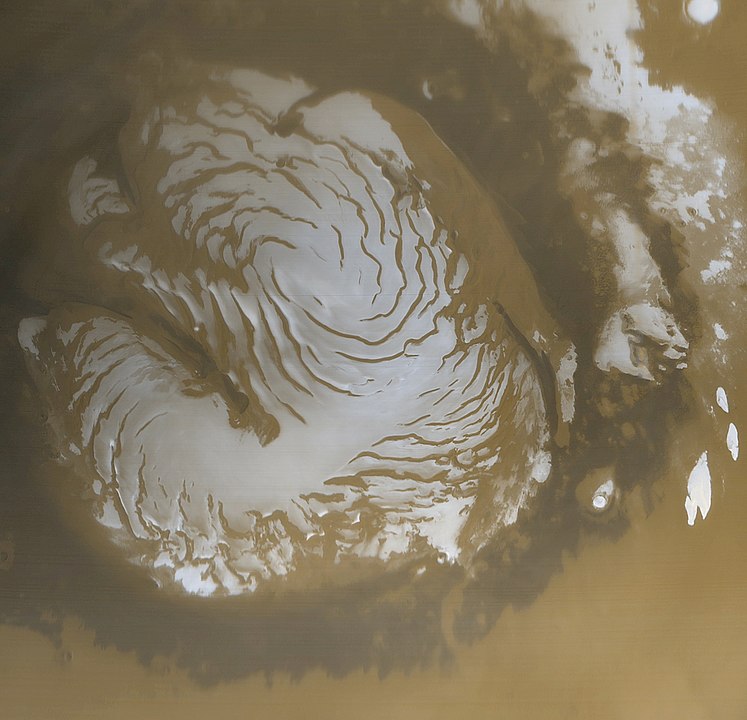 On Earth, the Coriolis force is evident in the formation of hurricanes and other weather phenomena.

In the image of Mars there are a few streaks of clouds on the left of the frame. They're likely caused by small, local storms that are kicking dust up into the atmosphere, contributing to the erosion of the scarps and slopes and changing the surface appearance and topography.

The overarching purpose of the HRSC on the Mars Express is to study Mars's surface processes over time, including winds and storms, and the seasonal changes at the poles.

The layers of ice at the poles are of particular interest to scientists. They likely hold clues to how the planet's climate has changed over millions of years. That's because as the ice melts and freezes, its mixed with dust that settles there, capturing a snapshot of conditions at a specific time.

During its time it's expanded our understanding of how wet and humid ancient Mars was, it's probed the planet's subsurface processes and structure, and of course, given us some great views of the planet's huge volcanoes and craters. 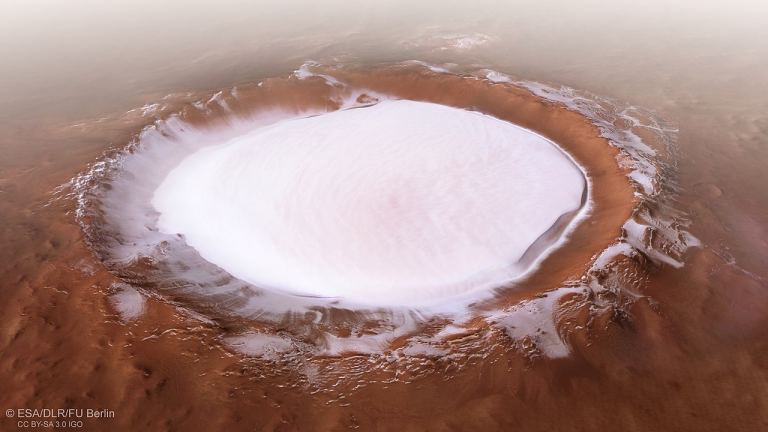 The leading image of the ice and troughs at the northern polar cap was released to coincide with the Seventh International Conference on Mars Polar Science and Exploration in Argentina from 13 to 17 January 2020.