Solar panels offer huge potential to move more people away from electricity generated from burning coal, and a new innovation devised by scientists stands to more than double the amount of light captured by conventional solar cells.

In a new study, a team of scientists from the UK, Portugal, and Brazil discovered that etching a shallow pattern of grating lines in a checkerboard design on solar cells can enhance the current generated by crystalline silicon (c-Si) by as much as 125 percent.

"We found a simple trick for boosting the absorption of slim solar cells," explains photovoltaics researcher Christian Schuster from the University of York.

"Our investigations show that our idea actually rivals the absorption enhancement of more sophisticated designs – while also absorbing more light deep in the plane and less light near the surface structure itself." 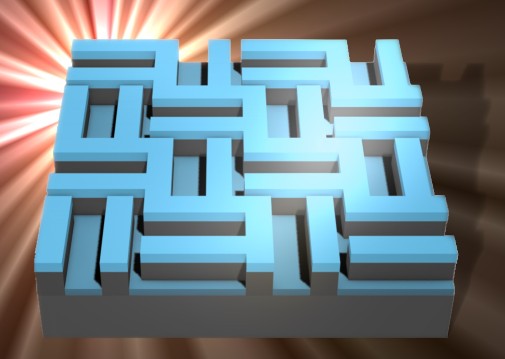 Up until now, comparable attempts using simple grating designs had only produced marginal gains in sunlight absorption, the team says.

This has led to more theoretically complicated structural tweaks, not to mention all kinds of alternative solar-based designs, including anti-solar panels, light-harvesting algae, and transparent solar cells.

While every single discovery is its own legitimate advancement towards a world less (and ultimately not) reliant on fossil fuels, Schuster and team say even very simple tweaks to existing solar cell technology could significantly increase our ability to reap power from the Sun.

Instead of looking at new structural designs based on natural textures or computational algorithms, the researchers instead focused on identifying what core theoretical considerations would enable an optimised pattern for the scattering and diffraction of sunlight.

Their goal was to make a solar cell absorb more energy by trapping more sunlight, while reflecting less away from itself.

Their modelling suggests that grating lines, arranged in simple periodic, quasi-random structure optimise the performance of a "photonic domain": the region within a photonic structure in which a basic diffractive element is periodically arranged in a one-dimensional fashion.

In an experiment, the team simulated the performance of a checkerboard-patterned photonic domain, made from a crystalline silicon slab just 1 micrometre thick (several times thinner than a strand of spider web silk), and compared it against other kinds of solar cell designs including a plain planar cell, vertical grating lines, crossed lines, and others.

The results suggested the checkerboard with randomised rotations of its repeating units generates more current than any of the competing cells, and generates about 125 percent as much as a conventional solar cell without a grating line design.

In addition, because of its inherent simplicity, the team says the checkerboard design could be easier to manufacture on an industrial scale, and also more robust than other more complex nano-structured solar cell patterns.

"Our design rule meets all relevant aspects of light-trapping for solar cells, clearing the way for simple, practical, and yet outstanding diffractive structures, with a potential impact beyond photonic applications," Schuster says.

The researchers acknowledge that their modelled results might deliver somewhat less impressively in the real world, once fabrication measures are put in place, depending on certain materials used to manufacture and encapsulate the cells. Changing the etching depth or size of the slabs would also have an effect.

Still, the team says the design principles they've pointed to here could lead to positive impacts in solar cell designs, and also in related areas that also depend on disruptive physical functions akin to light diffraction, such as acoustic noise shields, wind break panels, anti-skid surfaces, and more.

Further, by manufacturing such thin solar cells with a checkerboard design, the cost-effectiveness of resources used for cell fabrication could be 10-fold, the team thinks.

"In principle, we would deploy 10 times more solar power with the same amount of absorber material," Schuster says.