A US Air Force wind tunnel, photographed in 1960. (US Air Force)
PHYSICS

Wind tunnels are awesome, with many uses, both industrial and recreational. But now China has plans to blow all the others away with plans to build a tunnel capable of whipping up incredible hypersonic air blasts more powerful than any other tunnel currently operating.

You can't say the Chinese authorities aren't aiming high – they want to test aeroplane models at speeds some some 10 times faster than existing wind tunnels can reach.

Measuring 265 metres (869 feet) in length – more than three times as long as the average passenger jet – the new tunnel will be able to test aircraft at flight speeds of up to Mach 25. 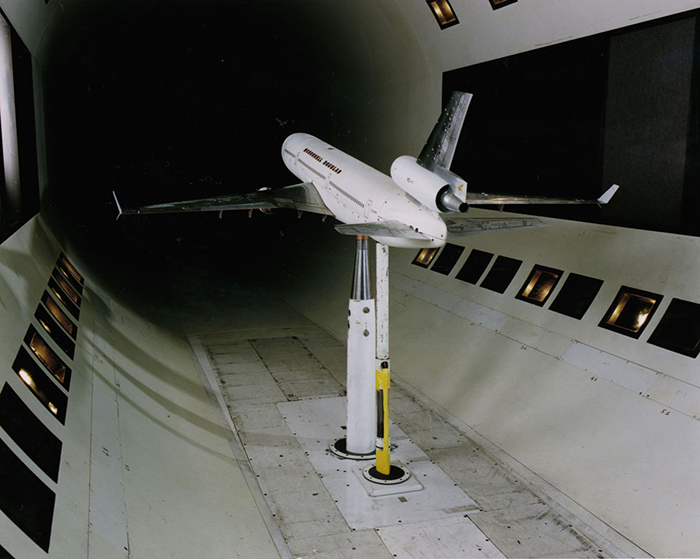 "The new tunnel will aid the engineering application of hypersonic technology by duplicating the environment of extreme hypersonic flights,"  Han Guilai, a researcher at the Chinese Academy of Sciences, told the Xinhua news agency.

"Once issues are discovered during these ground tests, they will be ironed out before test flights begin."

It's going to be a while before a jet actually reaches that level though, considering the fastest aircraft we have today max out a little over Mach 3.

Say you were travelling from New York to Beijing on a passenger jet, a journey which takes a little under 14 hours. If you did it at the speeds this new wind tunnel is going to generate, you'd get from A to B in a little over 20 minutes.

We've got a lot of obstacles to overcome before we can pop across continents in a morning though, not least the issue of building planes that don't burn up at such incredible speeds.

This isn't just about hypersonic air travel though – it's also about the next generation of super-fast missiles.

Hypersonic weapons are defined as weapons capable of travelling at five times the speed of sound or faster, and which are able to dodge existing anti-missile defences thanks to unpredictable changes of direction and high altitudes.

There's some debate as to how far off these missiles are from being workable, but the superpowers of the world are rushing to get them developed first.

And China's planned wind tunnel will no doubt help in getting the next generation of missiles off the ground, quite literally. China has reportedly already tested a DF-17 missile capable of hypersonic speeds, but it's not alone.

The US and Australia are thought to have launched prototype rockets capable of reaching Mach 7.5 in the recent past.

But with such high stakes on the table, countries are understandably reticent to let too much information leak out into the public domain.

Based on reports from last year, the new super-powered wind tunnel planned in China is scheduled to come online during 2020. To produce such a powerful blast, a mix of oxygen, hydrogen, and nitrogen will be detonated to produce a gigawatt of power in a split second.

Let's hope this exciting new technology is used to make travel more efficient, across the planet and into space, rather than to spark another global conflict.