For The First Time, Scientists Have Caught Bacteria "Fishing" For DNA From Their Dead Friends

Bacteria are slippery little suckers. They evolve rapidly, developing resistance to antibiotics and therefore becoming increasingly difficult to deal with. Now, for the first time, researchers have caught on film one of the mechanisms the microbes use for this speedy evolution.

Two Vibrio cholerae bacteria - the pathogen responsible for cholera - sit under a microscope, glowing a vivid green. As we watch, a tendril snakes forth from one of the bacterium, harpooning a piece of DNA and carrying it back to its body.

That appendage is called a pili, and the process whereby the bacteria incorporates the new genetic material from a different organism into its own DNA to expedite its evolution is called horizontal gene transfer.

And this is the first time scientists have directly observed a bacterium using a pilus to effect this gene transfer; it's a mechanism that has been hypothesised for decades.

"Horizontal gene transfer is an important way that antibiotic resistance moves between bacterial species, but the process has never been observed before, since the structures involved are so incredibly small," said biologist Ankur Dalia of Indiana University Bloomington.

"It's important to understand this process, since the more we understand about how bacteria share DNA, the better our chances are of thwarting it."

Exactly how bacteria used their pili to snare DNA remained elusive, partially because of the extremely small scales involved. A pilus is over 10,000 times thinner than a human hair, which means it's very difficult to observe.

What the team did - and the reason those bacteria glow with an eerie green light - is develop a new method of painting both the pili and the DNA with fluorescent dye. When they stuck the whole kit and kaboodle under a microscope, they were able to see the process with their own eyes for the first time.

In the video at the top of this page, you can see this on the right-hand side. The image on the left is what the scene looks like without the dye. 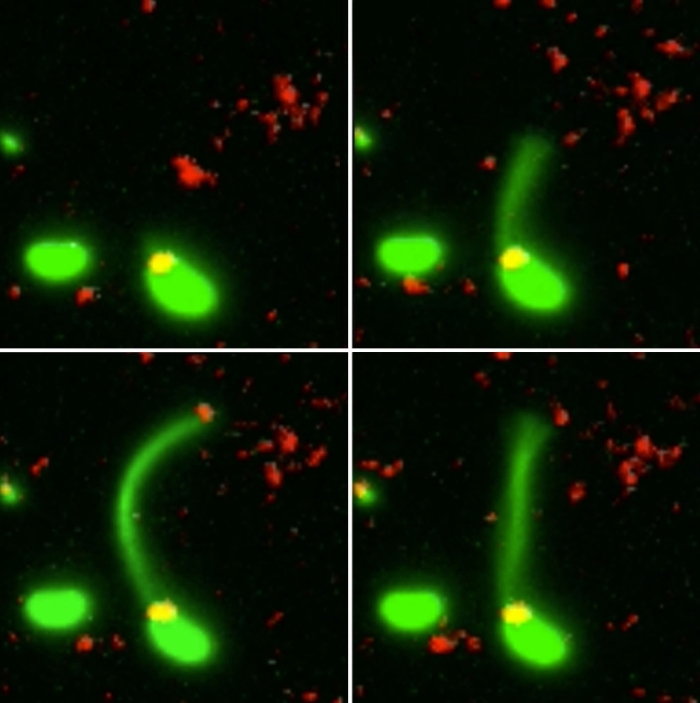 The pili cast a line through pores in the cell's wall to nab a piece of DNA, which it then reels back in with fine precision.

"It's like threading a needle," said biologist Courtney Ellison.

"The size of the hole in the outer membrane is almost the exact width of a DNA helix bent in half, which is likely what is coming across. If there weren't a pilus to guide it, the chance the DNA would hit the pore at just the right angle to pass into the cell is basically zero."

Antibiotic resistance can be transferred between bacteria in several ways - and there are several mechanisms for horizontal gene transfer too. The uptake of DNA from the surrounding environment is called transformation.

When bacteria die, they split open and release their DNA, whereupon other bacteria can snare and incorporate it. If the dead bacterium had an antibiotic resistance, the bacterium that caught the dead fellow's DNA also develops that resistance - and spreads it to its own offspring.

In this way, the resistance can spread like wildfire through a population. And it's a big problem. According to the CDC, at least 23,000 deaths have occurred in the US because of antibiotic resistance.

By figuring out the exact mechanisms bacteria use to spread antibiotic resistance, researchers hope to be able to devise ways of preventing it.

The next step is to find out how the pili latch onto the DNA at exactly the right place - especially since the protein involved with the process seems to interact with DNA in a way that hasn't been seen before.

And they also hope to use their method of applying fluorescent dye to observe the other functions of the pili.

"These are really versatile appendages," Dalia said. "This method invented at IU is really opening up our basic understanding about a whole range of bacterial functions."

The research has been published in the journal Nature Microbiology.