Chubby And Naked: Meet The Most Accurate T. Rex Reconstruction to Date

Trying to imagine what dinosaurs actually looked like 66 million years ago is no easy task – it involves some painstakingly detailed fossil analysis, some intelligent guesswork, and a bit of creative imagination.

As scientific methods develop and new research is published though, our concepts of dinosaur appearances are getting better over time.

Now a team of artists and palaeontologists have put together what they say is the most accurate T. rex image ever, constructed layer by layer from the most up-to-date research we have on the creature.

And it's not quite what you might remember from Jurassic Park: this is a chubby, smooth-skinned beast, with dinky forearms and a very low centre of gravity.

Perhaps the biggest change is the absence of feathers – something some experts now say were probably nowhere to be seen on the Tyrannosaurus Rex.

"[The team] worked from the skeleton up, spent months getting the muscles right, and the results are now available for everyone to see," says palaeobiologist and leading dino skeleton artist Scott Hartman, who consulted on the project. "The amount of time invested and attention to detail blew me away."

"As with any reconstruction there are of course some details we can't know, and competing interpretations that are equally likely. But I can honestly say this was the most exhaustive attempt at restoring an extinct animal that I've worked on."

Leading the new concept images was RJ Palmer: commissioned by the developers of dinosaur sim Saurian, Palmer combed through more than 20 published papers on the T. rex and its physiognomy.

In particular, he looked at a 2017 paper in Biology Letters suggesting the T. rex was not feathered in certain places, as was previously suggested – in fact it may not have been feathered at all, based on published skin impressions that show small reticulate scales on the surface of T. rex skin. 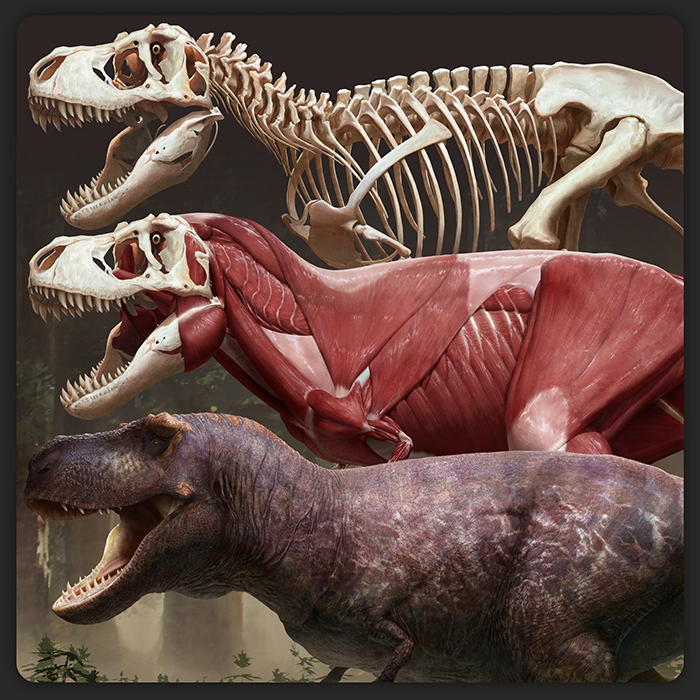 Like just about everything else in this picture, the feathering issue is up for debate, but Palmer and his team think they've got the best depiction so far based on current evidence.

They've put keratin plates on the back of the neck of the T. rex, for example, based on patterns in birds where the same sort of development is shown.

The artists also included extra-oral tissue on the jawline to conceal the teeth when the mouth is closed – that's based on small holes found in the dinosaur's bones that may have been used to supply nutrients to this tissue.

There's a lot of attention to detail here – right down to the blunt claws of the feet (which would get rounded off by hitting the ground) and the sharp claws of the hand (which wouldn't have to do much at all).

A giant painting of the finished dino visualisation, which Palmer says took 320 hours to do, is about to go on show as part of the palaeoart exhibit at the New Mexico Museum of Natural History and Science.

At the end of the day this isn't peer-reviewed work, and it involves plenty of guesses (albeit educated ones) – but it's a fascinating new chapter in the story of how we decide to show dinosaurs in our pictures and our movies.

"I've got to say that there aren't many palaeo projects where this much attention is given to producing credible animal appearances," says palaeontologist and palaeoartist Mark Witton, who also worked as a consultant on the project.

"To naysayers, I'd be asking 'can you do something better with the data we have to hand?'"