Dolphins Are So Smart They're Learning Tool-Use From Their Friends

The Indo-Pacific bottlenose dolphins of Shark Bay in Western Australia have an unusual way of obtaining food.

They chivvy fish into a large, empty marine gastropod shell. Then they carry the shell and captured fish up to the surface, and shake it upside down. Slurp! go the fish, straight down into the dolphin's belly.

It's called shelling, only the second tool use documented among dolphins - and the first that dolphins have been seen learning from their friends, just like great apes.

"This is an important milestone," said evolutionary biologist Michael Krützen of the University of Zurich in Switzerland.

"It shows that cultural behaviour of dolphins and other toothed whales is much more similar to the behaviour of great apes, including humans, than was previously thought."

The dolphins (Tursiops aduncus) were first observed using tools over 20 years ago, slipping sea sponges over their beaks like a thimble to protect them as they foraged. This behaviour was called sponging, and it allows the dolphins to access food in deeper water channels than non-sponging dolphins. 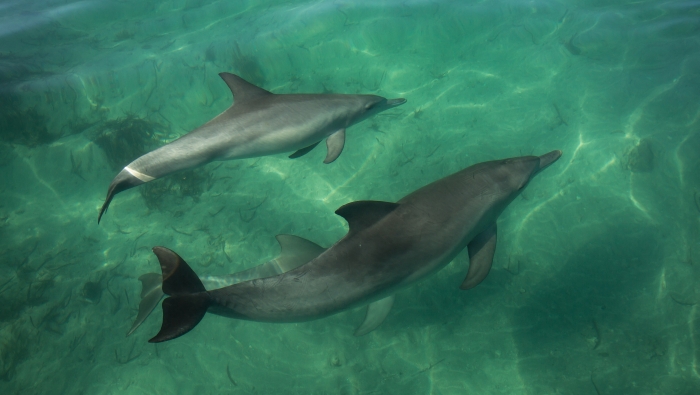 Sponging is adopted on matrilineal lines, a skill passed down from mothers to daughters - a type of learning called vertical transmission.

But there is another kind of learning, horizontal social transition, in which individuals pick up skills from their social peers - their friends. This is seen more strongly in species with extensive cultural repertoires, such as great apes.

There are similarities between dolphin and great ape societies that have led scientists to believe that dolphins should be capable of horizontal learning.

"Despite their divergent evolutionary histories and the fact they occupy such different environments: both dolphins and great apes are long-lived, large-brained mammals with high capacities for innovation and the cultural transmission of behaviours." Krützen said.

Previous studies on whether dolphins can learn from their friends have been promising, but inconclusive. Now a team of researchers led by behavioural ecologist Sonja Wild of the University of Konstanz in Germany has finally identified it.

Their data comes from over a decade's worth of observations. Between 2007 and 2018, the researchers documented over 1,000 individual dolphins across nearly 5,300 encounters with the animals.

Among those encounters, the shelling behaviour was observed in 19 individuals from three different genetic lineages, across 42 separate occasions.

That's a relatively low number compared with the total number of encounters, but it was enough to perform an analysis to determine how the behaviour was learnt.

They used genetic, behavioural and environmental data to model the likely transmission pathways, and found that shelling was likely spread among friends, rather than passed down from parents.

"These results were quite surprising, as dolphins tend to be conservative, with calves following a 'do-as-mother-does' strategy for learning foraging behaviours," Wild said.

"However, our results show that dolphins are definitely capable, and in the case of shelling, also motivated to learn new foraging tactics outside the mother-calf bond. This opens the door to a new understanding of how dolphins may be able to behaviourally adapt to changing environments, as learning from one's peers allows for a rapid spread of novel behaviour across populations."

For example, in 2011, a large marine heatwave devastated the seagrass habitat of Shark Bay, in which the dolphins forage for food. This resulted in a die-off of both fish and the invertebrates that live in the giant shells that the dolphins use for their fishing - and, afterwards, there was an immediate increase in the dolphin's shelling behaviour.

It's possible, the researchers said, that both the decrease in fish and the increase in shells could have played a role in this uptick.

"While we can only speculate as to whether this prey depletion gave the dolphins a boost to adopt new foraging behaviour from their associates," Wild said, "it seems quite possible that an abundance of dead giant gastropod shells may have increased learning opportunities for shelling behaviour."