Our Environment Is Turning These Adorable Birds Into Violent, Brain-Eating Killers

Every spring in the Netherlands, the resident great tits (Parus major) build their nests in tree cavities, hatch their young, and send a new generation of fluffy little black-and-gold featherballs into the sky.

Then along comes the pied flycatcher (Ficedula hypoleuca), migrating from Africa for the summer, and taking up the abandoned nests to raise their own young.

As a system, it's a pretty good one. Or it was. In recent years, there's been a problem: climate change is causing the nesting times to overlap, leading to conflict over resources. And it's deadly - because a breeding bird is a territorial bird.

The trend was first noticed by biologist Jelmer Samplonius from the University of Groningen's Institute for Evolutionary Life Sciences.

To study the nesting behaviours of both birds, he and his colleagues set up nesting boxes in two Dutch national parks, Dwingelderveld and Drents-Friese Wold, and monitored them for 10 years, from 2007 to 2016.

In that time, the researchers found 88 dead flycatchers in nests. Eighty-six of these had been killed by great tits, the other two by blue tits (Cyanistes caeruleus), also native to the region.

"When a flycatcher enters a box with a great tit inside, it doesn't stand a chance," Samplonius said. "The great tit is heavier, as the flycatchers are built for a long migration from Europe to Western Africa and back. Also, great tits have very strong claws."

However these fights go down, they can't be pleasant for the flycatchers. Most of the dead flycatchers were male, which makes sense, since the males procure the nesting site to attract a female. In any case, their deaths were gruesome. 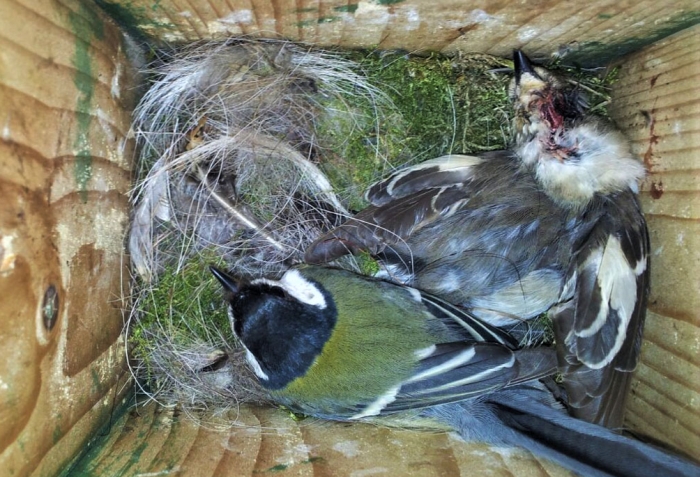 "The dead flycatchers were all found in active tit nests and had severe head wounds," the researchers write in their paper, "and often their brains had been eaten by the tits."

Yep. The tits are eating the brains of their fallen foes. That's a thing.

Actually, there has always been some competition between the two birds for nesting spaces, with the more agile flycatchers flying about and bothering the heavier tits during the nest-building process. This can result in the annoyed tit giving up and leaving to find a new spot elsewhere, leaving the flycatcher triumphant.

What the researchers wanted to figure out was whether a changing climate was having an effect on the competition between the two.

Over 10 years, they observed the trends and found that earlier warmer weather meant the first leaves appeared on trees earlier, which meant caterpillars appeared earlier too. Since great tits time their egg-laying around caterpillar peaks (because food is plentiful), that means they lay their eggs earlier too.

The flycatchers are also migrating earlier, but this on its own doesn't seem to cause any major conflict. It's also worth noting that migratory birds don't adapt as quickly to regional temperature changes, so the flycatchers' numbers are about the same.

The problem occurs because of two things. Firstly, because the weather is milder overall due to climate change, a greater number of tits are surviving the European winter - which, of course, means more competition for nesting spaces come spring.

And if a spring is then colder than the new normal, the tits build their nests later. So you get a greater number of great tits with overlapping nesting needs - which causes huge clashes with the flycatchers.

So far, the problem hasn't had a huge effect on animal populations - at least, not yet.

"Interestingly, we didn't see an effect on the overall flycatcher population of about 300 breeding pairs in our study," Samplonius said. "We noted that the males killed were usually those who arrived late in the season. These late birds quite often don't find a female to breed with, so that may explain why this behaviour has no impact on the population."

But the behaviours of both birds has changed because of climate change, and as temperatures continue to rise, the trend will likely worsen. At the moment, the fact that the late-arriving, non-breeding flycatcher males are primarily affected serves as a sort of buffer zone protecting the population; but that buffer zone could be scarily short-lived.

"We expect that if buffers are diminished," the researchers wrote, "population consequences of interspecific competition may become apparent, especially after warm winters that are benign to resident species."

The team's research has been published in the journal Current Biology.