Few areas of science are as mind-bending as quantum physics - from Stephen Hawking's black holes to the 'spooky action' that challenges our understanding of reality, there's a lot to make us amazed.

But because quantum anything can be tricky to understand, people also use it to explain phenomena that turn out to have far more mundane origins, or often have nothing to do with quantum physics whatsoever.

Case in point. Some people on the internet will try to convince you that this beautiful machine sorting marbles by colour works because of the 'quantum resonance' of each crystal. Take a look:

This video was created by Konstantin Otrembsky, a Russian visual effects and 3D artist who works for Channel One Russia.

We were a bit bummed to find out that the mesmerising cascade of these coloured balls is actually computer-generated, despite how realistic it seems at first glance (the sound! the moving phone camera!).

Otrembsky himself admitted as much in April, when he posted the footage on his Vimeo channel with the caption "it's a joke video, which was made to provoke people to suggest all kinds of theories and just for fun."

And oh boy, did we get some theories. After Otrembsky's original YouTube and Instagram posts in February, copies of the footage spread like wildfire across social media. It wasn't long until someone came up with this gem, auto-translated here from Spanish:

"Here's a small video based on quantum physics. The coloured balls are placed together by the resonance of the quartz crystals. Each colour has a different resonance.

"In the same way we group the people that vibrate in the same frequency. But there are still people who doubt that a human being is a source of energy."

We're not sure where this interpretation first emerged - it's been copied many times - but we're not surprised that people are uncritically sharing it, since it seems like such a nice message about… people belonging together. Something.

Those less inclined to believe the magical vibrational energy of the marbles tried to figure out how such a device could work, speculating that maybe the footage was reversed, or the sorting somehow correlated to the size of the balls.

But there's one more major detail that tells you this video is not real, and it involves actual mathematics. You see, this is not the first time we've seen an animated "marble sorter".

In January, a CG rainbow bead video already emerged on Reddit in a subreddit dedicated to computer simulations.

"Here's what a few of you guys asked for: Galton box, now with coloured beads," wrote the author. 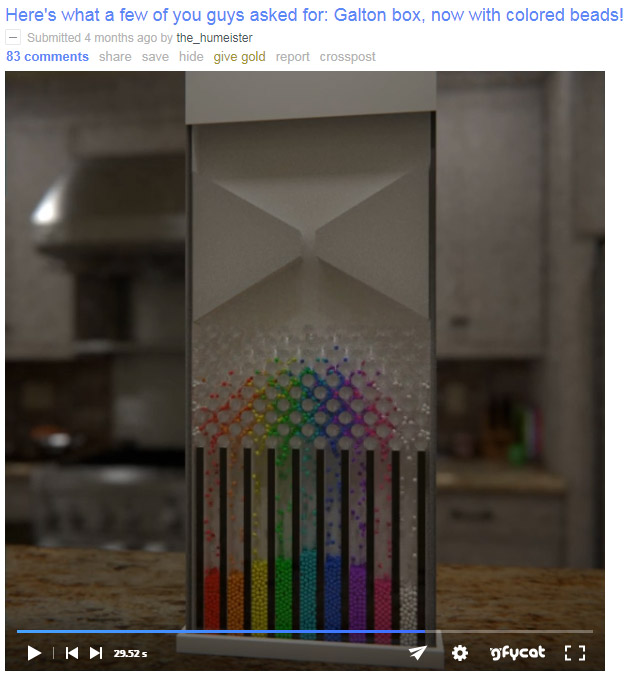 In their version, the beads trickle through and form not just a beautiful rainbow, but also the bell curve known as the normal distribution. The device is called a Galton Board - because it was invented by English mathematician Sir Francis Galton, who used it for statistical experiments.

These things do actually exist in real life, and they are absolutely mesmerising to watch:

It would be nice if computer-generated coloured marbles could teach us life lessons about "resonating" with people we're close to. But at least they can get us excited about the beauty of mathematics.

Bonus: You can learn more about the Galton Board in this excellent video: