The Milky Way is 13 billion years old. Some of our galaxy's oldest stars were born near the beginning of the Universe itself. During all these eons of time, we know at least one technological civilization has been born – us!

But if the galaxy is so ancient, and we know it can create life, why haven't we heard from anybody else?

If another civilization was just 0.1 percent of the galaxy's age older than we are, they would be millions of years further along than us and presumably more advanced. If we are already on the cusp of sending life to other worlds, shouldn't the Milky Way be teeming with alien ships and colonies by now?

Maybe. But it's also possible that we've been looking in the wrong place. Recent computer simulations by Jason T. Wright et al. suggest that the best place to look for ancient space-faring civilizations might be the core of the galaxy, a relatively unexplored target in the search for extra terrestrial intelligence.

Above: Animation showing the settlement of the galaxy. White points are unsettled stars, magenta spheres are settled stars, and white cubes represent a settlement ship in transit. The spiral structure formed is due to galactic shear as the settlement wave expands. Once the Galaxy's center is reached, the rate of colonization increases dramatically. (Credit: Wright et al.)

Older mathematical models of space colonization have tried to determine the time required for a civilization to spread throughout the Milky Way. Given the size of the Milky Way, wide-scale galactic colonization could take longer than the age of the galaxy itself.

However, a unique feature of this new simulation is its accounting for the motion of the galaxy's stars. The Milky Way is not static, as assumed in prior models, rather it is a churning swirling mass. Colonization vessels or probes would be flying among stars that are themselves in motion. The new simulation reveals that stellar motion aids in colonization contributing a diffusing effect to the spread of a civilization.

The simulation is based on previous research by Jonathan Carroll-Nellenback et al. which proposed that a hypothetical civilization could spread at sub-light speeds through a moving galaxy. The simulation assumes a civilization using ships travelling at velocities comparable to our own spacecraft (about 30 km/s).

When a ship arrives at a virtual habitable world in the simulation, the world is considered a colony and can itself launch another craft every 100,000 years if another uninhabited world is in range.

Simulated space craft range is 10 light years with maximum travel duration of 300,000 years. Technology from a virtual colony was set to last 100 million years before dying out with the opportunity to be resettled should another colony drift into range by galactic motion.

The results are dramatic. The galaxy's rotation generates a wave or "front" of colonization. Once the front reaches the galactic core, the core's density catalyzes a rapid increase in the rate of colonization. Even with very conservative limits placed on the speed of the space craft, a majority of the galaxy could be colonized in less than a billion years – a fraction of its total age.

The simulation's results reaffirm past proposals by Vishal Gajjar et al. to search the galactic center for signs of life. Not only can the center of the galaxy be rapidly colonized, but also efficiently scanned for technology.

We have a direct line of sight to the galaxy's center which encompasses the densest region of space relative to us. And since the galaxy formed from the inside out, the center is filled with older planets which provide more time for life to evolve.

The center also serves as a logical place to "talk" to and from – a central focal point of the galaxy. If you wanted to get a signal out to the rest of the galaxy, you could do so from the center to blanket the disk of the Milky Way. Likewise, if you wanted to find a signal, you might look to that same center.

Gajjar et al. also hypothesize that an advanced civilization may be capable of tapping into the energy of the Milky Way's central supermassive black hole to power a galaxy-wide signal beacon. Talk about a powerful "hello!" 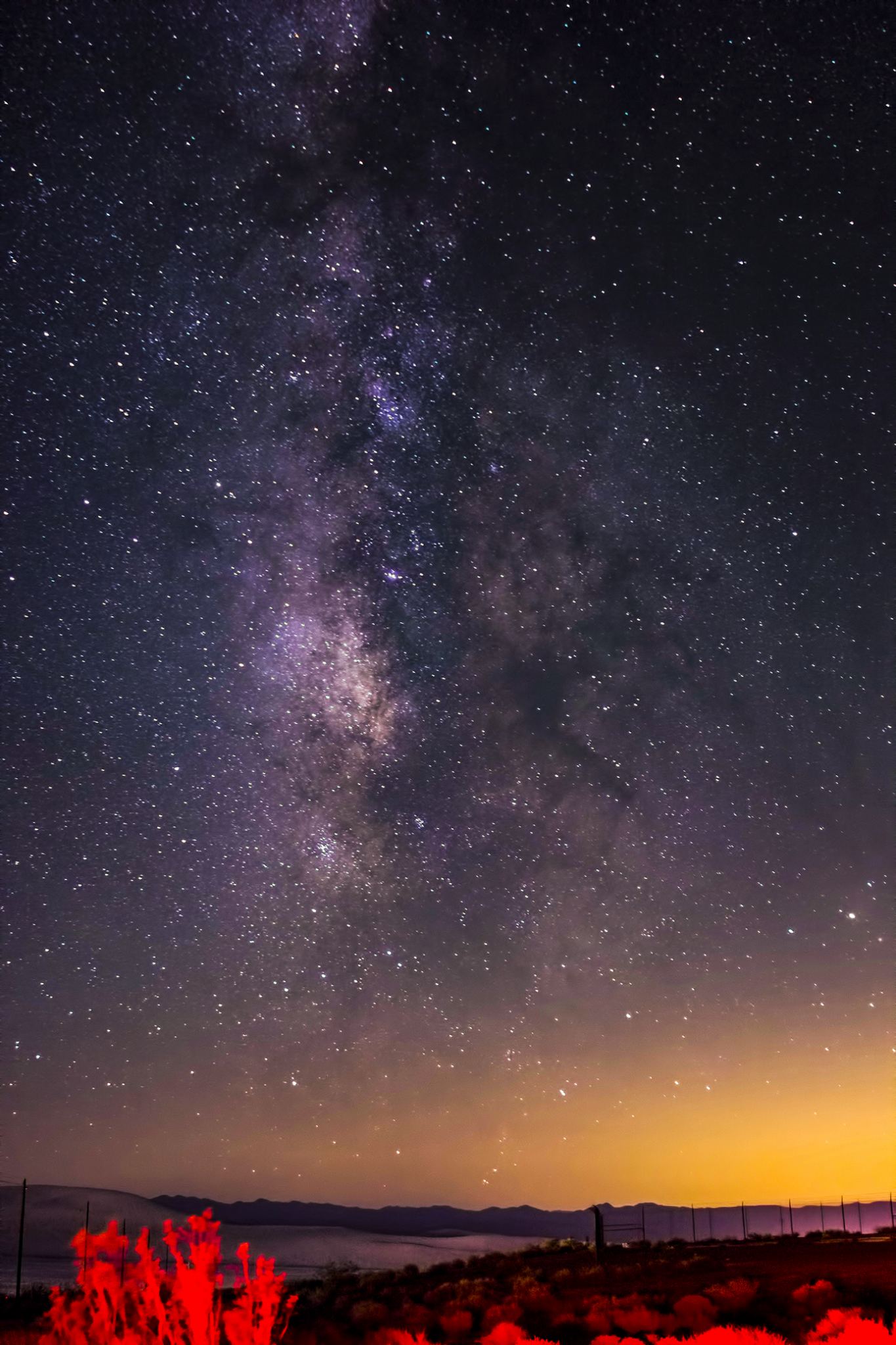 A view toward the galaxy's center from Earth captured in the Mojave Desert. (Matthew Cimone)

Then Why so Quiet?

Still, none of this answers the previous question – where are they? In fact, the speed at which the galaxy could be colonized complicates why we haven't heard from anybody.

Furthermore, Caroll-Nellenback et al. also note that during colonization, an advanced civilization might develop new propulsion technologies shortening the time needed to spread. And yet, preliminary radio scans of the galactic core haven't revealed any signals.

Perhaps the silence itself is an answer. The galaxy is so old with so much time available for life to spread that some believe the silence dooms any hope of meeting anybody.

But there is still hope!

The simulation shows it's possible that some parts of the galaxy are never settled despite eons of time. It's a matter of efficiency. Remember, you want to colonize at the shortest possible ranges.

As time passes, some colonies die out and are lost perhaps from resource exhaustion or cataclysmic event. Rather than reach farther out into space, colonies choose to reinhabit a dead colony at closer range.

Clusters of inhabited colonies form surrounded by uninhabited planets that are never colonized. A "steady state" is achieved where regions of the Milky Way's habitable worlds are simply too inefficient to colonize.

There are other possibilities to explain the silence as well. Perhaps long-lived civilizations are governed by sustainability to grow more slowly than anticipated. If there are multiple colonizing civilizations perhaps they are competing for resources or keep a distance from each other.

Perhaps civilizations take care to not interfere with inhabited planets such as ours (similar to the Prime Directive in Star Trek) or are cautious of potential biological incompatibilities faced on other worlds. All these possibilities may explain why we have yet to meet anyone… unless we already have… no, seriously.

Carroll-Nellenback et al. consider a "temporal horizon" – a point in history beyond which Earth would no longer retain evidence of previous colonization. Let's say, for example, a galactic alien civilization landed on Earth billions of years ago, lived thousands of years, then died off.

After all this time, virtually no evidence would remain of their presence. So "we" haven't met an alien civilization, but it's possible Earth itself has.

The simulation shows that, given our location in the galaxy, there is an 89 percent likelihood that at least a million years could pass without visits from interstellar ships – potentially enough time to erase signs of previous colonization.

The point is that between the galaxy being completely colonized, or being completely empty, the simulation demonstrates that there can be middle grounds – valid responses to the silence which still leave room for technological extraterrestrial life even without contact.

While the center of the galaxy is an ideal future realm for SETI research, there are other regions of the galaxy which mimic the same favorable conditions as the center – globular clusters.

Globular clusters (GC) are ancient massive collections of stars orbiting about the center of the galaxy at distances of tens of thousands of light years. Relics from a period of intense star formation catalyzed by galaxy mergers, there are about 150 known GCs in the Milky Way ranging from 10-13 billion years old.

GCs are incredibly dense with stars much closer to each other on average than found in the disk of the Milky Way. When considering interstellar travel or communication, we are typically talking about millennia.

However, a civilization within a GC would experience travel time between stars on the order of just a few years with communication times of months or even weeks. Problem is that the densities of GCs may negatively impact planet formation as well as the orbital stability of planets.

R. Di Stefano and A. Ray calculate what they call a "GC habitable zone". We generally use the term "habitable zone" to describe the distance a planet needs to orbit a star to maintain temperatures for liquid water. Earth resides in the habitable zone of the Sun (good thing for us). Rather than a 2 dimensional radius like the orbit of a planet, a GC habitable zone is a three dimensional shell orbiting around the center of the cluster itself.

The inner part of the shell's thickness begins where the GC density drops to where solar systems can survive the gravitational interference of nearby stars. The gravity of a nearby star might pull apart planetary dust rings disrupting the creation of planets. Another star passing near a system could also eject a planet from its parent star.

The outer edge of the shell's thickness is defined by where the density becomes so low that the average distance between stars is greater than 10,000 AU (astronomical units, representing Earth's distance from the Sun at about 150,000 km). 10,000 AU is equal to about 2 light months.

After this point, the advantages of being in the cluster – namely the short travel and communication times to neighboring stars – diminish. The zone encompassed by the shell is what Di Stefano and Ray call the GC "sweet spot" for colonization – star systems that are close together facilitating quick travel/communication but not so close that they tear each other's systems apart.

We want the GC sweet spot to encompass mainly lower mass stars which live the longest. Serendipitously, low mass stars also have the smallest radius solar habitable zones. The closer a planet orbits its parent star the less likely it is of being torn away by another star. 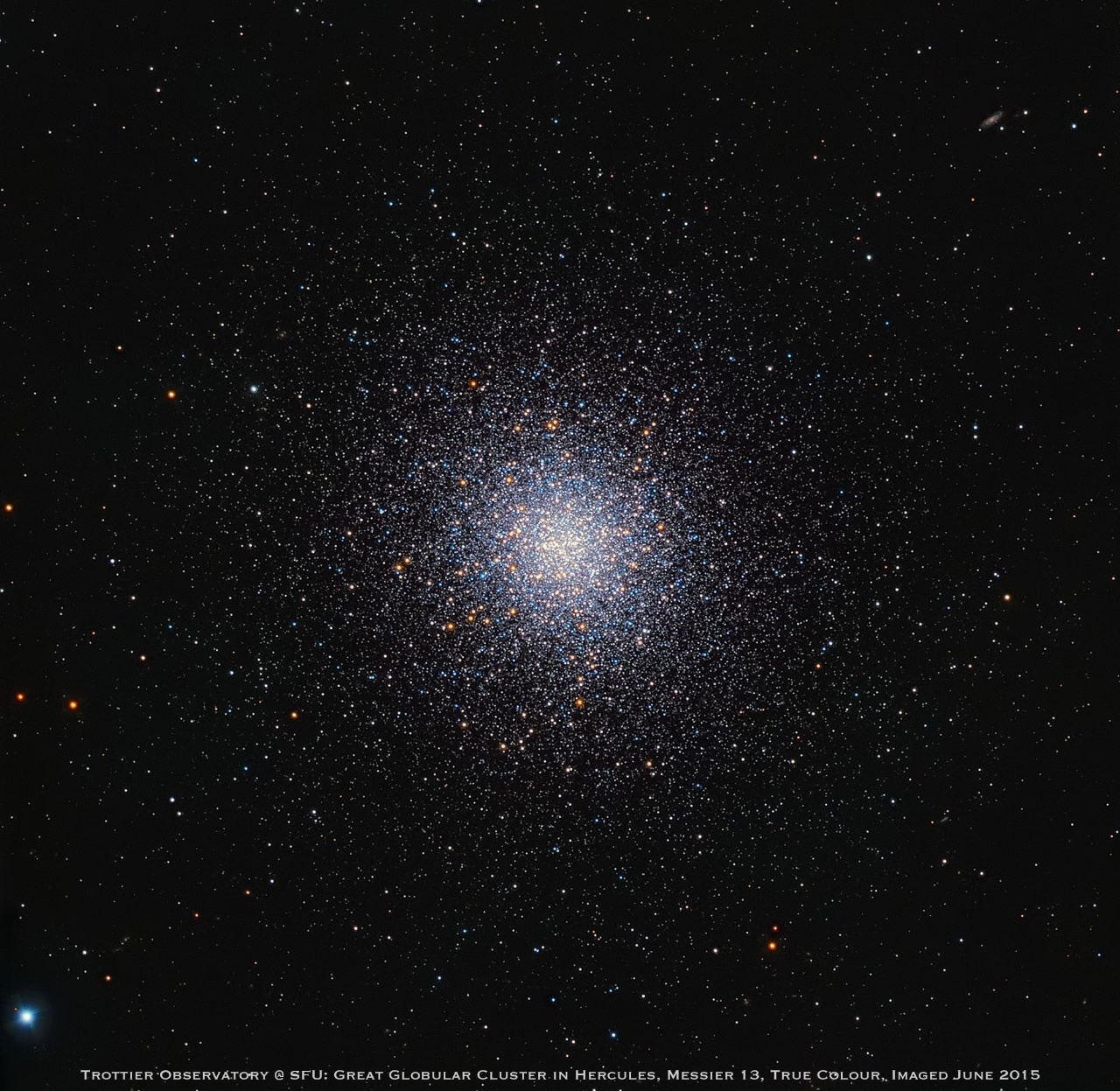 GCs also experience a phenomenon called "mass segregation" where the most massive stars – and therefore the least favorable to habitability in the cluster – find themselves gravitationally drawn toward the center. This segregation then naturally sorts the cluster from least to best choice systems from core to periphery.

The results are favorable. In a hypothetical GC approaching 100,000 solar masses, the sweet spot encompasses 40 percent of G stars (yellow dwarfs like our own Sun) and 15 percent of K and M stars (orange and red dwarfs) in the cluster. That's a lot of stars.

There is even the possibility that planets which have been ejected from systems could still host a civilization because of the combined ambient energy the planet receives from all the stars in the cluster – especially if the civilization has advanced solar energy capture technology. A free-floating world of space aliens.

Similar variables assigned to the Milky Way itself – with far lower stellar density – would result in… one communicating civilization (probably us). Changing the percentages to be slightly less conservative would mean more civilizations could exist in the diffuse disk but would be separated by massive distances upwards of 300 light years.

If you were located in a GC, you may try to communicate with the distant disk of the Milky Way. We, unfortunately, have yet to find any direct evidence that planets even exist in GCs. Our techniques for finding exoplanets are impaired by the distance to and densities of GCs. But that doesn't rule out the possibility. If a civilization does exist in a GC, with quick access to thousands of stars, Di Stefano and Ray say the civilization would essentially be "immortal."

We've actually beamed a message to a GC – the beautiful M13 Hercules globular cluster. Located in the constellation of Hercules, the cluster is 22,000 light years away, 145 light years in diameter, and is comprised of about 100,000 stars.