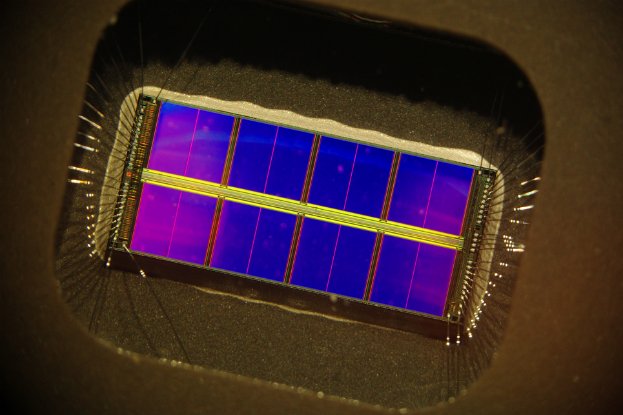 For the first time, scientists have created a material that allows computers to store and transfer information using light instead of electricity.

The research overcomes a major hurdle in the goal to develop optical computers capable of processing data at the speed of light.

Right now, computers process information via electrons. This data is moved around microprocessors and memory storage devices through nano-sized wires.

But although this technology seems tiny to us, it’s still alot bigger than we really need, and we’re at the pointy end of Moore’s Law where we physically can't shrink the components much further, which means we can't make computers much faster than they are now.

The next step that many physicists are pursuing is optical computers that process information via particles of light, known as photons, rather than relying on electrons.

“The challenge is to find a single material that can effectively use and control light to carry information around a computer,” said project leader and physicist Richard Curry in a press release. “Much like how the web uses light to deliver information, we want to use light to both deliver and process computer data.”

Curry’s team has now managed to find a way to modify a type of glass known as chalcogenide - which is already used in optical devices such as CDs and DVDs - so that they can be used alongside our current systems.

Chalcogenides have some useful properties - they’re able to conduct light across a pretty wide range of bandwidths, for example. But unfortunately they traditionally can only conduct positive charge, something that’s referred to as p-type conductivity. This means that in the past they’ve been completely incompatible with any type of existing computing technology.

“This has eluded researchers for decades,” said Curry in the release, “but now we have now shown how a widely used glass can be manipulated to conduct negative electrons, as well as positive charges, creating what are known as ‘pn-junction’ devices.”

Pn-junction refers to the interaction of both positive and negative conductivity, and it means that scientists will now be able to use the material to speed up computers.

The researchers unlocked the potential of chalcogenides by doping the glass with an ion of the element bismuth. This meant that they were able to create the useful optical material without needing ridiculously high temperatures, and also without using a large amount of doping agents - something that has, in the past, rendered chalcogenies incompatible with current computing technology. Their results are published in Nature Communications.

“This should enable the material to act as a light source, a light guide and a light detector – something that can carry and interpret optical information. In doing so, this could transform the computers of tomorrow, allowing them to effectively process information at much faster speeds,” said Curry in the release.

They’re already using the glass to create next-generation computer memory technology, known as CRAM, and the next step will be to create completely optical computers with the material.

Excitingly, it’s something they believe they’ll achieve within the next 10 years.

While that may not sound that crazy to you, think about the fact that right now there's information whizzing around the world that has to be ridiculously slowed down as soon as it hits our computers in order for us to be able to see it. But within a decade, we’ll have computers that are no longer held back by frustratingly slow electrons, and that are capable of transmitting information at the speed of light.