For almost a decade now, scientists have been trying to decode the origin of some of the most mysterious and explosive signals in the Universe - fast radio bursts (FRBs).

Lasting only milliseconds, these bursts of energy are about a billion times more luminous than anything we've ever seen in our own galaxy, and seem to be travelling across vast distances. But despite having detected more than 20 of them, scientists still aren't sure where they're coming from, or what causes them. Now researchers are one step closer by ruling out any source on Earth.

There are still several hypotheses out there that need to be ruled out before we can say for sure where FRBs do come from - perhaps the most bizarre one put forward by Harvard scientists last month is that the FRBs could actually be alien signals.

But the fact that we now know the answer lies in space is a big deal. It might sound obvious, but let's not forget that back in 1998, researchers thought they had discovered a new type of radio signal coming from space, only to figure out 17 years later that it was coming from a microwave oven in their research facility.

The reason the origin of these radio signals is so hard to nail down is that we often find them using single-dish radio telescopes, which can 'hear' a lot without providing much perspective on where it's coming from.

"Conventional single dish radio telescopes have difficulty establishing that transmissions originate beyond the Earth's atmosphere," said one of the researchers on the latest study, Chris Flynn from Swinburne University of Technology in Australia.

To overcome this problem and rule out terrestrial interference as the source of FRBs once and for all, the researchers used the Molonglo telescope in the Australian Capital Territory (ACT), which has a collecting area of around 18,000 square metres (194,000 square feet).

This huge collection area means the telescope is ideal for picking up FRBs, but back in 2013, the team also realised that because of its architecture, it's not possible for it to detect any signals coming from within our atmosphere.

So the team set about hunting through Molonglo's data to see if they could find any traces of FRBs - seeing as the telescope produces more than 1,000 TB of data each day, that's no easy feat. The idea was that if the telescope had detected the signals, then they must be coming from outer space.

Eventually, they uncovered three new FRB signals in the telescope's data, which matched perfect with the signals we've picked up before - indicating that they couldn't possibly be coming from Earth.

Their conclusions back up findings from earlier this year, when researchers were able to pinpoint the source of a FRB to a tiny dwarf galaxy more than 3 billion light-years from Earth.

But for now, the sources of the three newly detected FRBs remain relatively mysterious, except for the fact that they're not of this world - the data suggest they're coming from the direction of the constellations Puppis and Hydra (signified by the three red stars below): 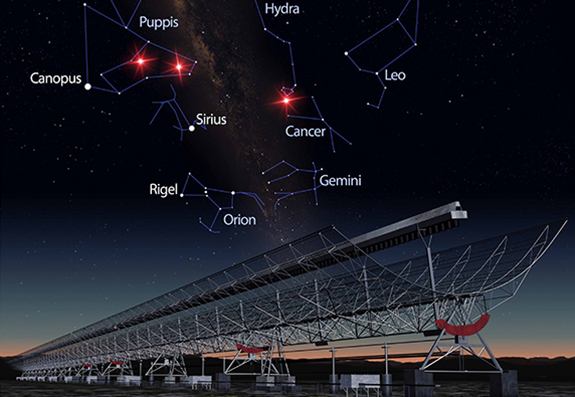 The Molonglo telescope is now being updated with the hope that it might be able to provide some more insight in future - hopefully even going as far as pinpointing specific galactic origins.

"Figuring out where the bursts come from is the key to understanding what makes them. Only one burst has been linked to a specific galaxy," said lead researcher Manisha Caleb.

"We expect Molonglo will do this for many more bursts."

The research has been accepted for publication in an upcoming edition of Monthly Notices of the Royal Astronomical Society, you can read it free online now over at arXiv.org.