The Pacific Ocean off the California coast is mixed up, and so are many of the animals that live there.

The violet, thumbnail-size snails washing up here in Horseshoe Cove have never been seen this far north. By-the-wind sailors, a tiny relative of warm-water jellyfish, sprinkle the tideline by the dozen.

And in the tide pools along the cove's rocky arms, as harbor seals about to pup look languidly on, a slow-motion battle is underway between native Giant Green and Starburst anemones, a species common in Mexico.

The southern visitors are bludgeoning their northern hosts with poisonous white-tipped tentacles. 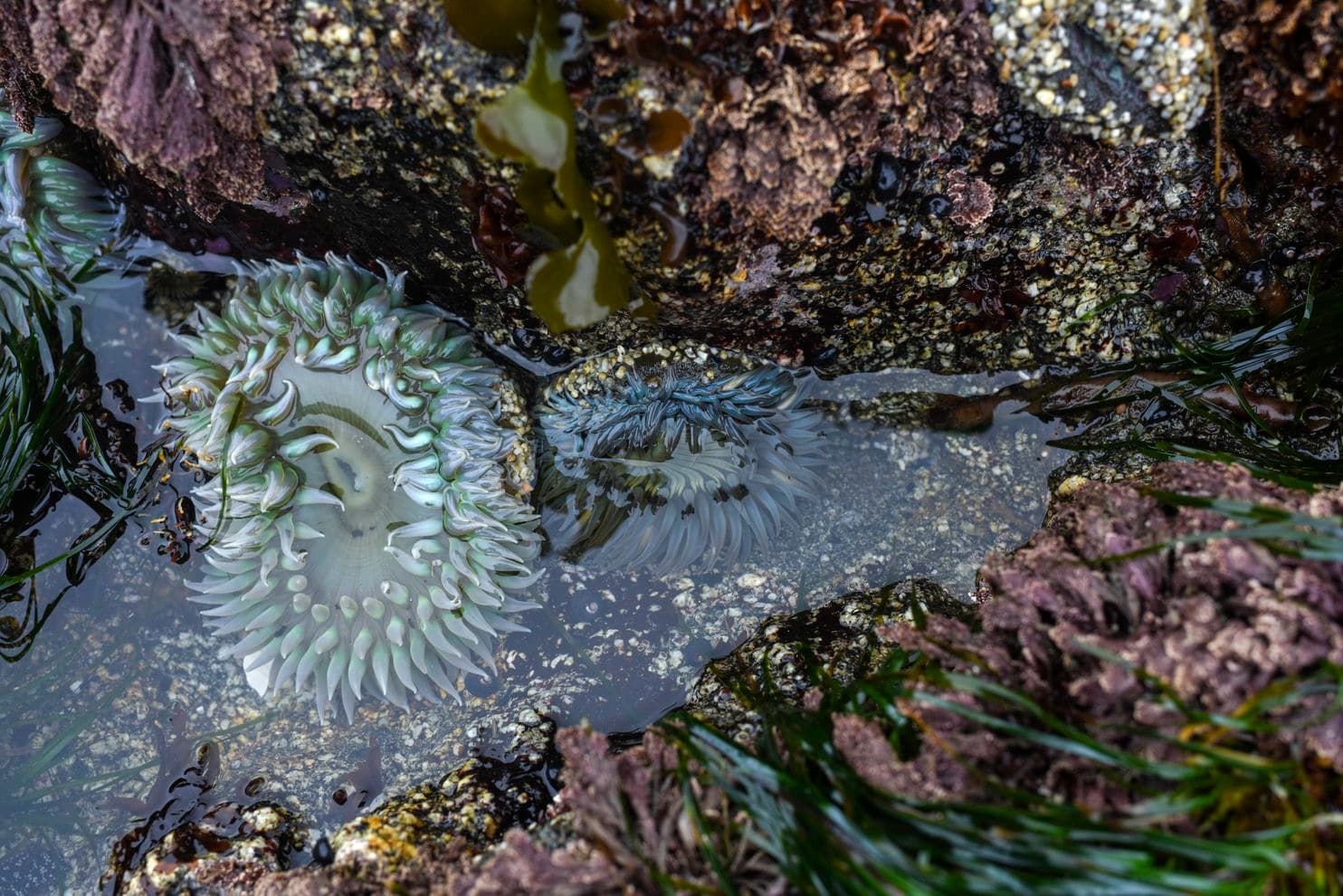 Then there are the whales.

As many as five at a time have been foraging in the San Francisco Bay, the vast inlet about an hour south of here along the wild Sonoma and Marin coasts. The number is far larger than in a normal year, when one or two might wander in beneath the Golden Gate Bridge for a day or two at most.

These whales now are staying for as long as a month. And, for the first time ever, there are two species in the bay at the same time - Grays and Humpbacks, both usually speeding north to their Bering Sea feeding grounds this time of year.

Instead, whale-watching boats are having more luck in the opaque waters off Berkeley on the bay's eastern edge than in the open ocean. Three Grays have also washed up dead on bay shores in recent weeks, their stomachs empty.

"Our guess is that they are super hungry, maybe looking for a little food before continuing north," said Bill Keener, a marine mammal biologist who has been tracking whales, dolphins and porpoises in the bay for decades as head of Golden Gate Cetacean Research.

"But why are they staying this long? We can't really figure out what these guys are doing."

Five years ago, the Gulf of Alaska warmed to record temperatures, likely due to a sudden acceleration in the melting of Arctic sea ice. Usually a cold southern current flows along California.

That year, the warm "blob" spread down the coast and, instead of blocking tropical species from moving north, it served as a balmy welcome to a variety of animals far from home.

Then came El Niño, the roughly once-a-decade temperate current that flows north and east from the equatorial Pacific to the California coast. The two warm-water events came together - one rare but understood, one unprecedented and baffling - to form an ocean heat wave whose real-time and lingering effects may have permanently scrambled California's coastal ecosystem.

"This was like opening a door temporarily for southern species to move northward," said Eric Sanford, a professor of biological sciences who runs a lab here at the University of California at Davis's Bodega Marine Laboratory.

"And the longer you hold the door open, the more opportunity you give southern species to move north." 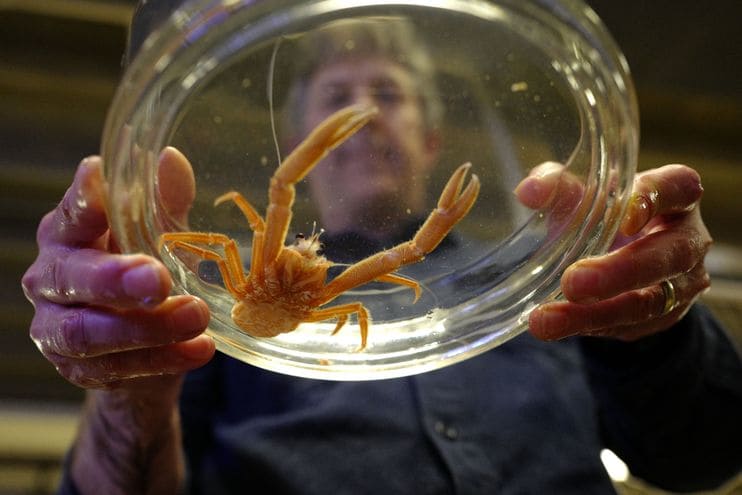 The door was not just ajar but wide open for several years. Today, there are still pockets of unusually warm water off California, doggy doors that continue to beckon tropical species that are strangers to its usually chilly 840-mile (1,350 km) coastline.

Last year, scientists identified a yellow-bellied sea snake that had washed up on Newport Beach in Orange County, the first time the tropical species had ever been found in California in a non-El Niño year.

Then, last month, an olive Ridley sea turtle was spotted by lobster fishermen off Capistrano Beach, in part because a sea gull was resting on its back. The turtle migrates on warm currents, one of which may have swept it so far north.

Things got even weirder a few-hours' drive north in Santa Barbara County where a hoodwinker sunfish washed up last month. The fish, about seven-feet long (2 metres) and weighing a ton, is among the more bizarre-looking creatures of the sea.

So, too, was its place of death: A hoodwinker had not been seen in the northern hemisphere for more than a century.

"These extreme events exaggerate the rate of change that is taking place in our oceans," said Jacqueline Sones, the research coordinator at the Bodega Marine Reserve, referring to the back-to-back blob-El Niño phenomenon.

"And if you have more of these extreme events you will see an even greater rate of change."

Sones and Sanford, research partners as well as spouses, published a paper with several other scientists in Nature last month that identified 67 marine species now pushing the northern boundary of their commonly known habitat.

Of those, 37 species had never been found as far north as Bodega Bay, a seaside town best known in popular culture as the place where Alfred Hitchcock filmed The Birds. Another 21 species had only been found so far north during El Niño years or during other unusual warm-water events - boundary pushing that Sones tracks in part through her blog, where she posts be-on-the-lookout photos of species for those even farther north to identify.

The findings suggest that some of these species are here to stay, a relocation that Sanford and Sones do not necessarily believe is a bad thing but one with uncertain long-term effects.

"This really is a striking barometer of change," said Sanford, who has been at the blufftop lab here for 14 years. "That's a short window of time. Our oceans are changing pretty quickly."

The consequences are also visible in the well-scrubbed pens of the Marine Mammal Center, a laboratory, emergency-response center and hospital that sits atop a Cold War-era Nike missile installation in the Marin Headlands just north of San Francisco.

The hospital - the largest of its kind in the world - is bracing for its busy season.

In the past two weeks, the number of patients has doubled to 90. Most are northern elephant seals, many of them weak from malnourishment and about a third the size they should be three or so months into life.

At the hospital, they live in spacious pens - clean seawater pools in the middle - where they are fed, tested and given medicine when needed. The place is a mad chorus of yelps and groans, a whirl of cleaning and feeding and transporting patients from pens to exams in four-wheeled "seal barrows." 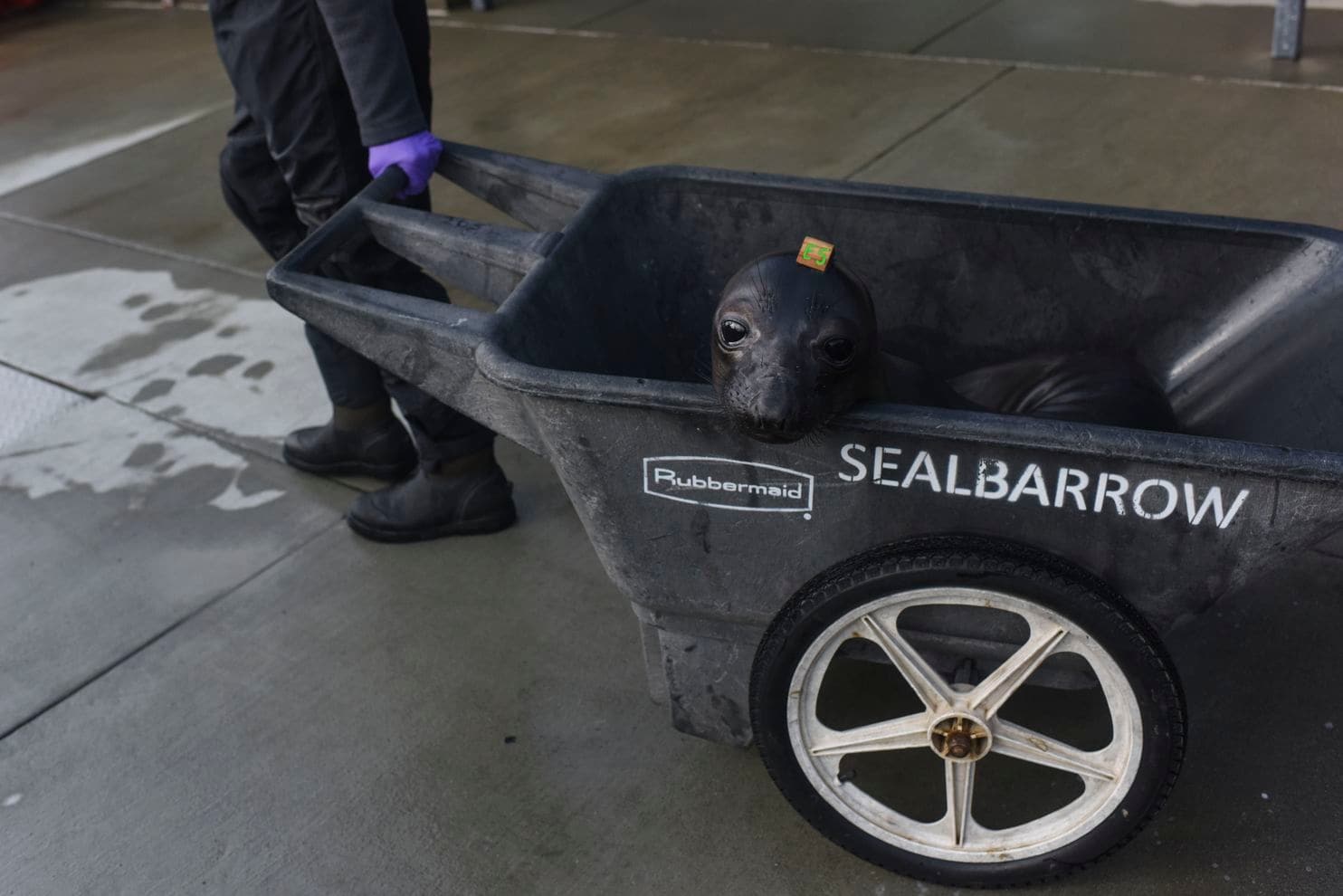 Before release into the rough Pacific, the seals attend "fish school," hands-on coursework that teaches them how to find and capture food in the open ocean. In the hospital, they collectively consume a half-ton of herring a day.

"It's very obvious to us when the cycle gets thrown off," said Shawn Johnson, the center's director of veterinary science. "We're basically on the front lines of ocean health, and mammals are very sensitive to even minor changes in the ocean's health."

While the numbers have declined since then, they remain higher than pre-blob days.

The center receives 10,000 calls each year on its rescue hotline from as far away as San Luis Obispo County, hundreds of miles to the south. On this day, three elephant seals - named Dayzend, Yazzy and Washbean by the emergency crews - are scheduled for rescue.

The reason for the continuing high numbers is the mystery around food.

Even before the blob, the supply of anchovies and sardines, the staple of many marine mammal diets, was low and declining. The warming served as a wild card.

Many of the seals and sea lions breed on the Channel Islands, a protected chain that runs off Santa Barbara and Ventura counties. They then roam for food in the summer months with sardines as their prime prey.

But sardines remain scarce, even though they are considered a warmer-water fish. Studies have found that adult seals and sea lions are traveling much farther for food, leaving pups to fend for themselves closer to shore. Many end up in the hospital. 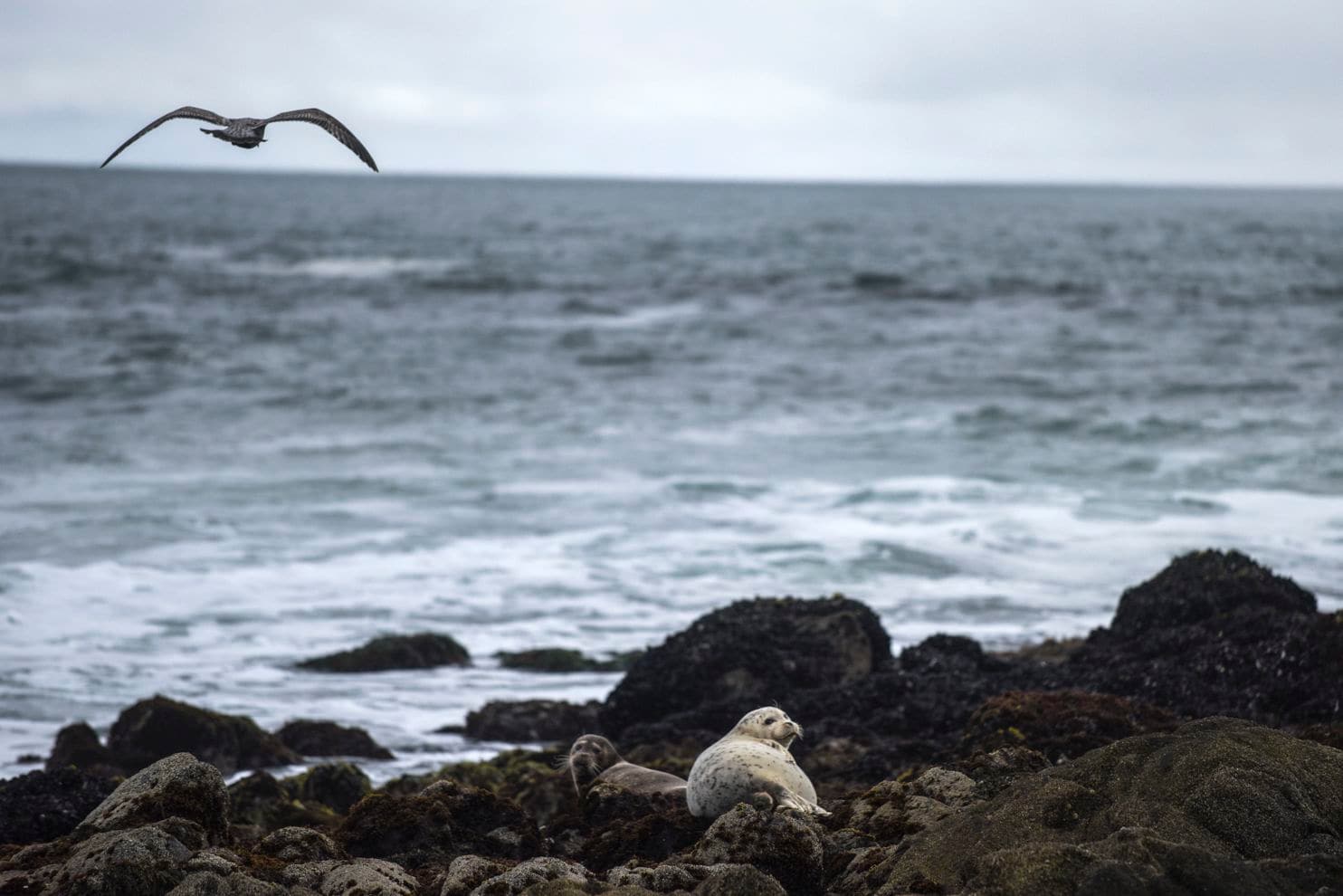 Elliott Hazen, a research ecologist with NOAA's Southwest Fisheries Science Centerin Monterey, Ca., said that "a lot of signals point to the fact there is just not enough food to support some of these sea lion habitats."

"Part of what was so unique about the blob is that it was warming we had never seen before, so there was no antecedent to compare it to," Hazen said. "And it may be true that not all warm water is equal in its effect on fisheries."

What have rebounded are anchovies, a dietary staple of the Humpback, which has the rare ability to feed on small fish and krill. But anchovies are behaving differently, too.

Hazen said the fish are moving closer to shore, maintaining a density that is appealing to Humpbacks, which are becoming increasingly reliant on anchovy as part of their diet. This may explain why Humpbacks, never seen inside San Francisco Bay until three years ago, are moving in now.

The Pacific was calm on a recent morning, a chilly breeze scalloping the surface, lit by sunlight fighting through low clouds. Lands End park sloped into the sea on the far side of the bay's opening, and from high in the Marin Headlands, the Golden Gate Bridge appeared below with the city skyline in the middle distance.

Just off Kirby Cove, a spout rose from the smooth sea. Then a Humpback leaped, breaching momentarily, before a several-minute dive for food. The uncommon is now common, the wait for a whale sighting from land just minutes long.

But the close-to-shore migrations in search of food have increased risks to the whales. Of the 11 recorded whale deaths in the region last year, the vast majority were the result of the animals being hit by ships or entangled in fishing nets.

Those dangers are amplified this year. But Keener, the marine mammal biologist who tracks whales in the bay, is equally concerned by the bizarre Gray whale behavior and appearance.

Gray whales, once endangered, have made a remarkable recovery in the past half century. They are still a "threatened" species, mostly because of the dangers posed by nets off the California coast.

As their numbers have risen, though, their food has declined with increased demand and as varying ocean temperatures may be pushing krill outside of migration routes. In the San Francisco Bay, the Grays are hanging around Angel Island, once the main point of entry for Asian immigrants arriving on American shores.

Keener's phone buzzed with a photo from a friend who operates a whale-watching boat in the bay. It was a picture of his "fish finder," which provides a kind of MRI of the water near a boat. This one showed thick red bands of anchovy just east of Alcatraz.

The carcass of a Gray had also washed up that day even farther east. A team from the Marine Mammal Center would head there a few hours later, performing the necropsy and then letting it decompose into nutrients for other animals stalking the bay for food.

"They just keep heading east," Keener said. "And that is a really bad sign."