Consumers Have a Bigger Impact on The Environment Than Anything Else, Study Finds

There's a general awareness today that China and its massive industrial sector generate more carbon emissions than any other country, which is one of the reasons that parts of the nation have to endure some serious issues with smog and airborne pollutants.

But according to a new study, if you want to know what's really driving the impact on the planet, you need to look past the obvious primary factors taking a toll on the environment – like industry and agriculture – and instead realise whose needs those things are servicing.

From that perspective, researchers say household consumers are by far the biggest drain on the planet, which makes for a very different picture to purely nation-focused analyses of environmental impact. In other words, before we start blaming whole countries for the state of the planet, we should probably be looking at our own habits and demands.

"If you look at China's per capita consumption-based (environmental) footprint, it is small," said researcher Diana Ivanova from the Norwegian University of Science and Technology. "They produce a lot of products but they export them. It's different if you put the responsibility for those impacts on the consumer, as opposed to the producer."

In their analysis, published in the Journal of Industrial Ecology, the researchers examined the environmental impact of consumers across 43 countries and 5 rest-of-the-world regions.

By measuring 'secondary impacts' – the environmental effects of producing the goods and products we buy every day – the researchers say consumers are responsible for more than 60 percent of the world's greenhouse gas emissions, and up to 80 percent of global water use. 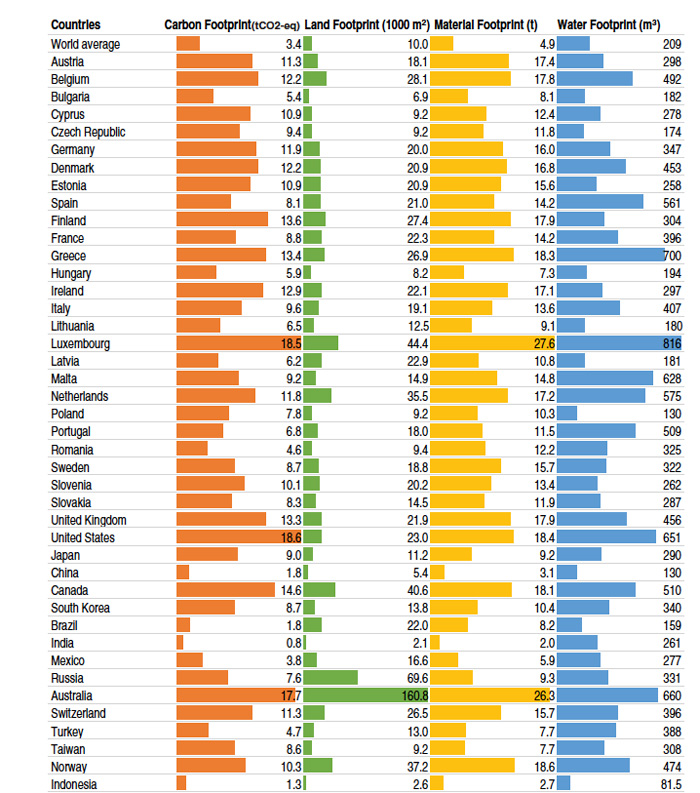 Norwegian University of Science and Technology

"We all like to put the blame on someone else, the government, or businesses," said Ivanova. "But between 60–80 per cent of the impacts on the planet come from household consumption. If we change our consumption habits, this would have a drastic effect on our environmental footprint as well."

When you look at the impacts of consumers based on where they live, the researchers found a pattern: the richer a country is, the more its inhabitants consume, and the greater each person's impact on the planet. Food is of particular importance here. Rich nations eat more meat, dairy produce, and processed food, which have a huge impact on land and water resources.

In the researchers' analysis, the US is the worst performer when it comes to per capita greenhouse gas emissions, with a carbon footprint of 18.6 tonnes CO2 equivalent. Luxembourg is second with 18.5 tonnes, followed by Australia with 17.7 tonnes.

By contrast, China's per capita carbon footprint is just 1.8 tonnes CO2, and the global average is 3.4 tonnes.

None of which is intended to shame the inhabitants of rich countries, although the researchers hope that with a clearer picture of how consumer behaviour contributes to environmental impact, each of us might make positive changes in our personal approach to consumption.

According to the authors, the two easiest ways to cut your environmental impact are to stop eating meat and simply cut back on your purchases.

"Households have a relatively large degree of control over their consumption, but they often lack accurate and actionable information on how to improve their own environmental performance," said Ivanova. ""Any activity where we have a choice of buying a product or using a service, the service will have much less impact."