What Is The Cosmic Microwave Background?

The cosmic microwave background (CMB) is a cloud of low-energy radiation that permeates the observable Universe. This soft echo of light provides solid evidence in support of the Big Bang theory.

The faint glow of the cosmic microwave background is believed to be the flash of light that spilled from the early Universe roughly 300,000 years after its birth, when subatomic particles from hot, dense ionised plasma combined into atoms in what's known as the 'epoch of recombination', and photons could finally move freely.

Over billions of years, the flash has been dragged with expanding space, cooling down and distorting into the long waves we see as the CMB today. 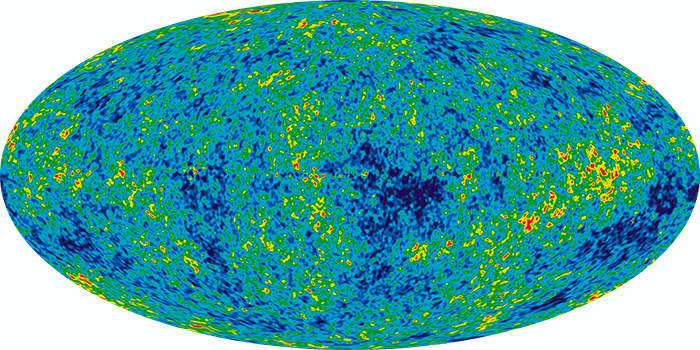 While the coloured patches make the CMB look uneven, the shades indicate maximum differences of just one part in ten thousand, making this a remarkably smooth wall of light. (NASA/WMAP Science Team)

How scientists use the cosmic microwave background

The CMB is pockmarked with cosmic voids, however – areas that appear colder than the hotter regions surrounding them, and these temperature differences are a tool astronomers can use to study the evolution of the Universe.

For example, for temperature differences to appear so even throughout space, the Universe must have been even more compact than first estimated, before expanding rapidly and slowing to its present rate, freezing the distribution of microwaves as a snapshot in time.

This rapid growth of space is referred to as the 'period of inflation'. Astrophysicists aren't sure what caused it, adding one more mystery to the development of our Universe.

All topic-based articles are determined by fact checkers to be correct and relevant at the time of publishing. Text and images may be altered, removed, or added to as an editorial decision to keep information current.