Could Godzilla-Sized Creatures Ever Exist?

Life has bubbled away on this moist mudball we call Earth for around 3.5 billion years, and in that time, the chunkiest creature Mother Nature has managed to squeeze out is the blue whale.

But raised on a diet of Hollywood's Kong-sized creatures and Tokyo-smashing gaiju, we're curious to know – what would it take to truly supersize life in the Universe?

How big could a single cell get?

With few exceptions, most self-replicating cells across the biosphere can't be seen without the aid of a microscope. There's a good reason for this. In fact, a whole variety of reasons, all based on principles hard-wired into chemistry and geometry.

Take for example the ratio of an object's surface area to its volume. As 3D objects (such as cells) get bigger, this ratio narrows, meaning the goo in the middle expands faster than its outer layer.

Having less surface per cubic micrometre of cell is like having a mouth that can't keep up with a growing body – it restricts the rate at which important nutrients and gases can cross the border to get to the expanding real estate.

That's not the only restriction. There are also matters of structure. Even big cells will need to pry apart their membrane and DNA at some point if they're to replicate.

The mechanics of this process for most living things rely on thread-like structures called microtubules, which act like a skeleton giving the cell structure and a means of movement. These also help put a cap on cell sizes.

Of course, evolution could stumble upon solutions to push the limits of bioengineering. Take Caulerpa taxifolia for example. This invasive, fast-growing algae threw out the whole rule book on cell theory, deciding multicellularity just wasn't its style. 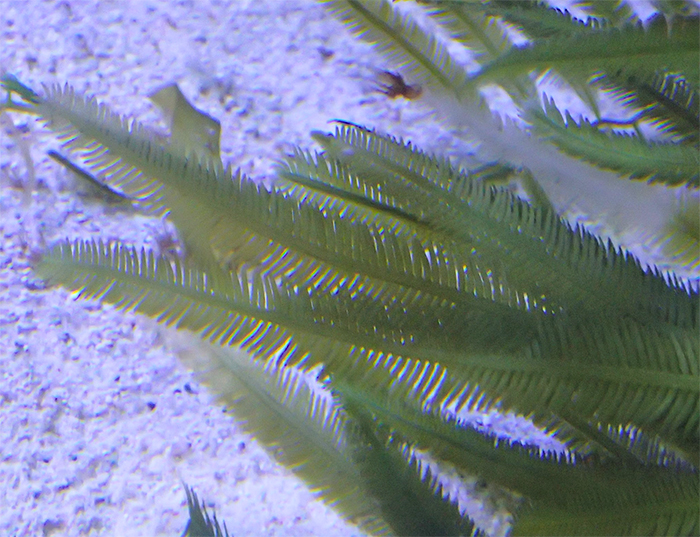 Though C. taxifolia (above) has the passing appearance of an aquatic fern with fronds up to 80 centimeters (31 inches) long, it's effectively one, giant cell … if you play fast and loose with the definition of cell. It still has multiple nuclei, for example, and hosts a swarm of endosymbiotic bacteria to help it take up nutrients.

Still, as far as single-cellular organisms goes, it's a true monster.

Speaking of monsters, the algae known as sailor's eyeball (Valonia ventricosa) also deserves a mention as a giant single cell.

Then there's Acetabularia. While only reaching around 10 centimeters, it is one of the largest single-celled organisms that does contain only a single nucleus.

So cells can get pretty big, if we're willing to rethink what qualifies as a cell.

So how big could a plant get?

Roughly two and half thousand years ago, in a part of the US that would one day be known as Tulare County in the state of California, a seed sprouted. Today that sapling is a touch over 80 meters (roughly 275 feet) tall, and comprises nearly 1,500 cubic meters (about 52,500 cubic feet) of wood.

It's such an impressive specimen the giant redwood (Sequoiadendron giganteum) even has a name. General Sherman – the biggest living tree on Earth.

Even the ol' general is a bit of a twig compared with the behemoth known as the Lindsey Creek French Tree.

The Lindsey Creek French Tree was a coast redwood (Sequoia sempervirens); an ancient species that dates back to the dawn of the dinosaurs.

At a whopping 2,550 cubic meters in volume and 118.87 meters tall, it's got a place in the history books as the biggest tree ever recorded. Sadly, a storm took it out back in 1905 or it still might be the king of plants today.

To support such impressive masses and reach dizzying heights, redwoods have evolved a few tricks to overcome limitations.

One limitation for a plant's size is getting water from the basement to the roof. Fortunately sequoias are incredibly well-suited to their cool, damp habitats on North America's west coast, with more than half of their moisture drawn from the roiling fog via their leaves.

Though their roots are typically shallow, their wide bases, emerging from a 'fairy ring' root structure, gives them a wider, more solid support.

Coupled with a complex genome that allows them to push ever higher for centuries, resisting pestilence and the occasional fire with relative ease, redwoods like these are true survivors that can take their time to inch towards the sky.

Nature might one day produce something taller, but it probably won't be any time soon. Even the ancient redwood might have seen its day as changes in climate reduce moisture and threaten forests with hotter fires.

For something even taller to evolve on Earth, it would need to overcome some of the engineering problems our skyscrapers face.

Right now, the 828 meter high Burj Khalifa in Dubai is the tallest building in the world. It's possible we could build even higher and break a kilometer, but to do so would require ever wider buttressing.

A taller tree would need to overcome similar challenges in ground support, not to mention water and nutrient transport, and longevity for growth.

If we're not worried about height, and are willing to again rethink what defines a single plant, then sequoias are mere toothpicks compared with the truly god-like entity known as Pando.

Covering 107 acres of Utah's Fishlake National Forest is a wonder of nature made up of tens of thousands of quaking aspen (Populus tremuloides) trees, each genetically identical to the last. For most purposes, this forest of connected, identical trunks can be considered to be one organism, a male aspen affectionately named Pando.

Weighing in at nearly 6,000 tonnes (about 13 million pounds), the vast mass of roots, trunks and branches is essentially one of the biggest organisms on Earth. Like the sequoias, its time might also be coming to a close. Though it's been around for 80,000 years, there doesn't seem to be much new growth of late, making researchers wonder if poor old Pando's days are numbered.

Plants aren't the only contenders for the single biggest organism on Earth. Sprawling webs of hyphae connecting a network of honey mushrooms (Armillaria ostoyae) are up there with the giants.

One specimen in Michigan covers 90 acres and weighs about 400,000 kilograms (880,000 pounds). Not quite as big as Pando, but an impressive demonstration of the potential of fungi to grow to truly gargantuan proportions. And who knows if we've missed other such giants hidden underground.

Okay, but what about my Godzilla?

Compared with the challenges of evolving a mountain-sized beast, skyscraper plants and mega-mushrooms are simple. It's likely we've seen as big as animals could get.

The biggest land animals we have any record of belong to the sauropod branch of the dinosaur family tree – huge quadrupeds with a long neck balanced by a long tail that could exceed 40 meters and tip the scales at 70 tonnes … if not more.

How much more? When an animal doubles in size, its mass increases by a factor of eight. Bones need to evolve ways to hold this extra heft up off the ground – such as by increasing in density – and muscles then need to pull it all about. Not only does this demand more energy, it places additional stress on the heart and lungs.

Sauropods found an efficient body plan that made good use of their diet of plant material, letting their swivelling head wander for food while their bulk stood in place.

But unless we want our kaiju to live off spinach, it'll need to hunt for prey.

The biggest among the meat-eating dinosaurs probably wasn't much bigger than Spinosaurus. As it was, at up to 15 to 16 meters long, this maxisize predator seemed more inclined to float about in rivers and wait for a big fish to wiggle on by.

Spinosaurus had the right idea of the ultimate super-sized predator, though. Let water hold up your bulky butt and let the food come to you.

Whales have perfected this strategy over the past few tens of millions of years, expanding their lengths and girth to basically become long gulping tubes of plankton death. Buoyed by seawater, their bones have been spared the trauma of holding up all that mass, and their muscles can focus their energy on lunging onto swarms of nutritious crustaceans.

Bigger lunges are worth the effort, potentially sending plenty of calories down the hatch. But only if the calories are there to be swallowed. The density and availability of krill only goes so far, setting limits to even the whale's huge size.

Even with more food, it's possible we've seen as big as animals can get (based on existing physiology at least), with blue whale hearts already working overtime during their foraging.

To grow a true megabeast, we'd need a world where gravity is low, oceans are deep, or the atmosphere is thick. We'd need a dense supply of calories close at hand, we might even need a whole new way of imagining how vital materials are transported around that mass.

In other words, based on what we know of life on Earth, our Godzilla-sized life form would be remarkably un-Godzilla-like.