The discovery of more than a thousand fossilised teeth in a prehistoric river bed is eating away at our current definition of dinosaurs.

The species, Spinosaurus aegyptiacus, with its giant fin-like tail, has been causing waves in recent years, and some scientists are sure this dinosaur was a swimmer - the first known example among dinosaurs.

Now, hundreds of this creature's teeth, nearly half of the enormous haul found in Morocco, have this group more convinced than ever.

"From this research we are able to confirm this location as the place where this gigantic dinosaur not only lived but also died," says palaeobiologist David Martill from the University of Portsmouth.

"The results are fully consistent with the idea of a truly water-dwelling 'river monster.'"

The massive haul of teeth belongs to both dinosaurs and some aquatic animals. Counting up over 1,200 fossils, researchers found just under half were from the Spinosaurus.

The sheer abundance of spinosaur teeth - relative to other dinosaurs - in the riverbed location is a reflection of their aquatic lifestyle, the team argues. 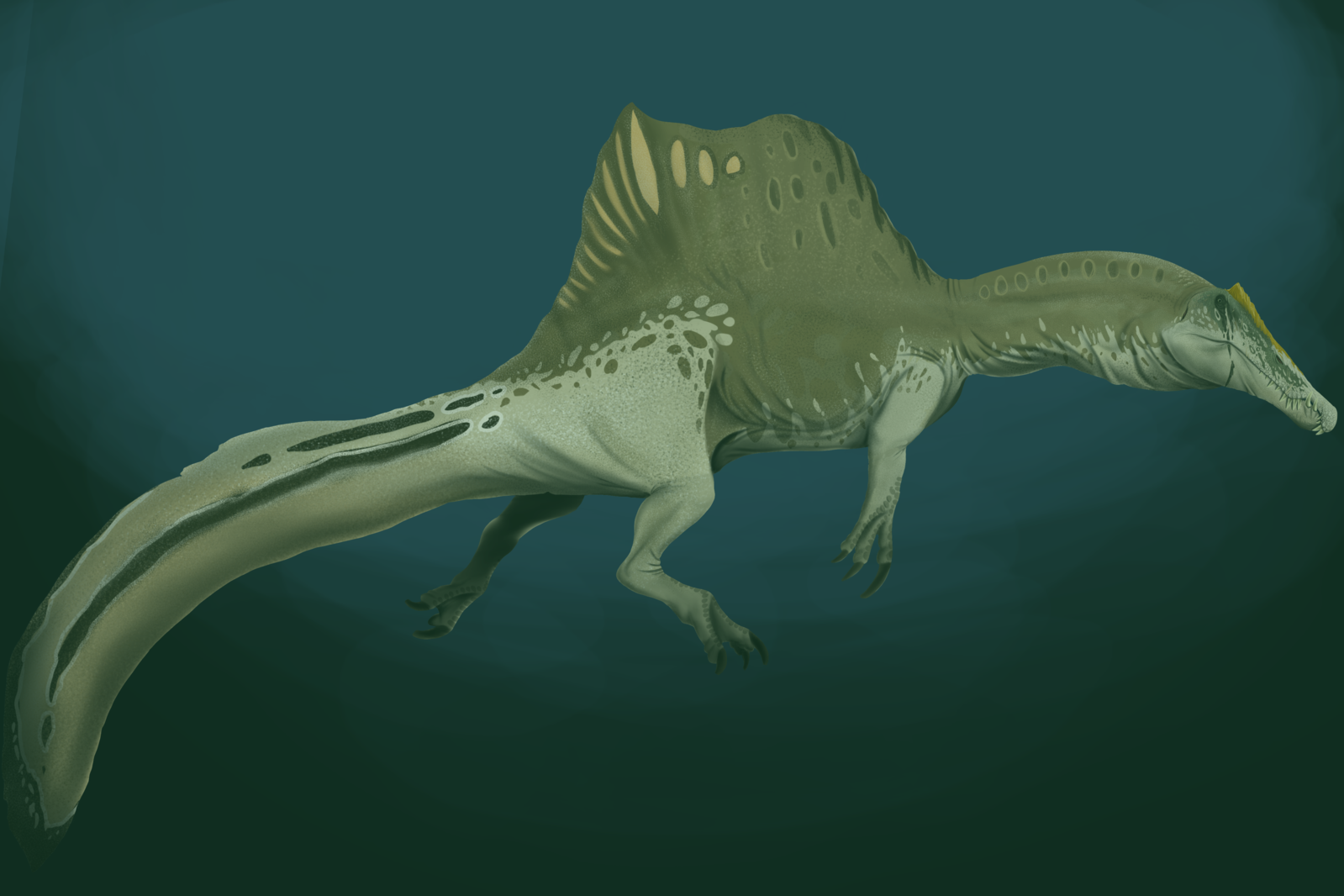 "An animal living much of its life in water is much more likely to contribute teeth to the river deposit than those dinosaurs that perhaps only visited the river for drinking and feeding along its banks," they write.

In 2014, palaeontologist Nizar Ibrahim first made the case for a semi-aquatic Spinosaurus. Others who examined the fossils disagreed, arguing the dinosaur was a topsy-turvy floater at best, driven into the water by hunger for fish. Its skeleton, they said, was unsinkable.

Then, earlier this year, Ibrahim and his colleagues found a fossilised Spinosaurus tail - what some scientists have called a 'game-changer'.

The discovery added far more weight to the idea that this giant predator (famous for its cameo in Jurassic Park) spent at least some time swimming in the water (as it did in the film). So much so, the team declared its tail the first "unambiguous evidence for an aquatic propulsive structure in a dinosaur".

The new find in Morocco erases even more doubt. Ibrahim and his colleagues are now arguing the spinosaur was not just semi-aquatic but "largely aquatic" and spent "much of its life in water", where its teeth were shed at what is speculated to be a similar rate to modern crocodiles.

While many other Spinosaurus fossils have been obtained commercially, with unknown origins, these teeth come from the prehistoric Kem Kem river system, which once flowed from Morocco all the way to Algeria.

The ancient waterway, now long gone, was home to Cretaceous creatures like the sawfish, crocodiles, flying reptiles and, along its banks, dinosaurs.

During reconnaissance field work in the south east of Morocco, scientists discovered a sandstone bed of bone absolutely ridden with Cretaceous fossils.

Just over a kilometre away, the team met several miners in action, and they bought all the fossils the workers had found in the ancient river bank.

Spinosaur teeth have particular features that make them easy to identify, allowing the researchers to focus on them; the team found hundreds of fragments from the Spinosaurus - far more than any other dinosaur, or fish for that matter.

The authors admit the teeth might have gathered here from the Spinosaurus wading along the banks of the river, snatching its prey from the safety of the shore. But while the reptile's long neck might match up with that theory, its hind limbs aren't anything like those of modern wading birds, which are closely related to dinosaurs.

In fact, the authors say the short hindlimbs of spinosaurs are only consistent with one form of avian locomotion: active swimming.

And then there's simply the sheer number of teeth. Other dinosaurs were known to shed their teeth and wade on the shores of this river, too, so why are Spinosaurus fossils everywhere?

"With such an abundance of Spinosaurus teeth, it is highly likely that this animal was living mostly within the river rather than along its banks," argues University of Portsmouth palaeontologist Thomas Beevor.

The study was published in Cretaceous Research.