Crows Can Build Compound Tools Out of Multiple Parts, And Are You Even Surprised

Well, we didn't think it was possible, but we should have had more faith in our feathered corvid friends: crows just got even cooler. Researchers have discovered that crows don't just use single objects as tools; they can also make them out of multiple parts that are individually useless.

Let that sink in for a moment.

We already knew that corvids - crows and ravens - are capable of reasoning cause and effect, solving multi-step puzzles, planning for the future and even fashioning simple tools out of sticks and paper.

But making compound tools is something that has only ever been observed before in primates - specifically, humans and and great apes.

Even young humans take several years to be able to learn this skill, because cognitively speaking, it's actually quite complex. It requires the ability to anticipate the properties of objects, and to be able to mentally map the consequences of putting them together prior to doing so.

As such, it's considered a pretty important milestone when it comes to brain evolution. So observing it in birds is pretty spectacular.

"The finding is remarkable because the crows received no assistance or training in making these combinations, they figured it out by themselves," said ornithologist Auguste von Bayern of the Max Planck Institute for Ornithology and the University of Oxford.

The team conducted their research on eight New Caledonian crows (Corvus moneduloides), a bird well known for its intelligence.

First, the birds were presented with a previously unseen transparent puzzle box they had to solve to get a piece of food inside. The box had a narrow gap on one side, and sufficiently long sticks were left lying around.

It didn't take long for the birds to figure out how to insert a stick into the gap to push the food treat towards an opening in the box. 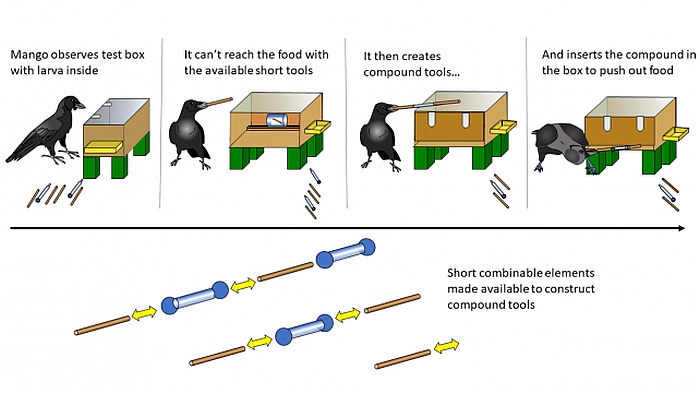 Once the birds had figured out how to use the box, it was time to get serious. Once again, they were presented with the food box, with a treat they could see inside.

But there were no long sticks.

Instead, the scientists left objects that were individually too short, but which could be combined to make a tool long enough to reach the food. We're talking things like disassembled plastic syringes, with the barrels and plungers separated.

Without any help, four of the crows (named Tumulte, Tabou, Mango, and Jungle) figured out how to partially insert the plunger into the barrel to make a longer tool that could reach the food treat. They did it in a very short space of time, too - within 4-6 minutes of interacting with the objects.

"The successful birds acted in a seemingly purposive manner, using the compound tools to aim at the food immediately after creating them. This typically required transporting the compound to the box for use," the researchers wrote in their paper.

"Except for one individual, Mango, a bird with apparently fluctuating motivation, the successful subjects also solved the task in the 3 opportunities that followed their first success. Mango refused to participate in 2 follow-up trials but succeeded continuously afterwards."

Mango, as it turned out, seemed to be something of a moody genius. In subsequent trials, where the pieces were smaller again - requiring the creation of tools of more than two pieces - Mango repeatedly built tools of 3 or 4 pieces, and successfully used them to reach the food most of the time.

Although it is difficult to know the cognitive processes involved in the crows' construction of compound tools, Mango's skills seem to indicate that it is deliberate - especially since his tools fell apart several times, leading him to try again.

"It involved both combining hollow elements with sticks and the other way around, as well as turning the tool to insert the solid end in another hollow element. Accidental discovery of this recursive process (treating a 2-element compound as a potential part for further combination and construction of a 3-element one, and so forth) seems implausible."

It's also the first time compound tool construction using more than 2 parts has been observed in an animal other than a human.

That doesn't mean crow cognition is similar to that of humans and apes necessarily - but it does provide some insight into the cognitive processes involved in problem solving, the researchers said.

And it adds yet another piece to the growing body of evidence that crows and ravens are the coolest of all the birds.

Their paper has been published in the journal Nature Scientific Reports.