It's a known fact that crows craft and use tools, but how do they know what to do? A new study has blown us away, showing the birds can memorise tool shapes and recreate them from memory.

New Caledonian crows have been observed making tools in the wild - in particular, hooked and barbed tools that can fish out delicious food from hard-to-reach places.

But exactly how they learn tool designs - and how to modify and optimise them - hasn't exactly been clear. Is it instinctive, or is it something young crows can learn from watching other crows at work?

Although New Caledonian crows don't appear to pay too much attention to what other crows are doing in the wild, specific tool designs have emerged in different areas. Observed over decades, this suggests that separate crow populations are developing their own modifications that persist and improve over generations.

This could be an example of something called cumulative cultural evolution, which is rarely observed outside humans. But only if the crows are indeed memorising tool designs and recreating them.

To see if the clever birds are capable of this, a team of researchers led by psychologist Sarah Jelbert of the University of Cambridge designed an experiment for eight wild-caught New Caledonian crows.

First, they trained the crows to recognise a good tool. Each crow was offered a choice of pre-made cardboard vouchers to use on a custom "vending machine" - two large vouchers and two small vouchers.

When the "correct" card was inserted into the vending machine, a hidden experimenter on the other side would dispense a meat treat for the bird. 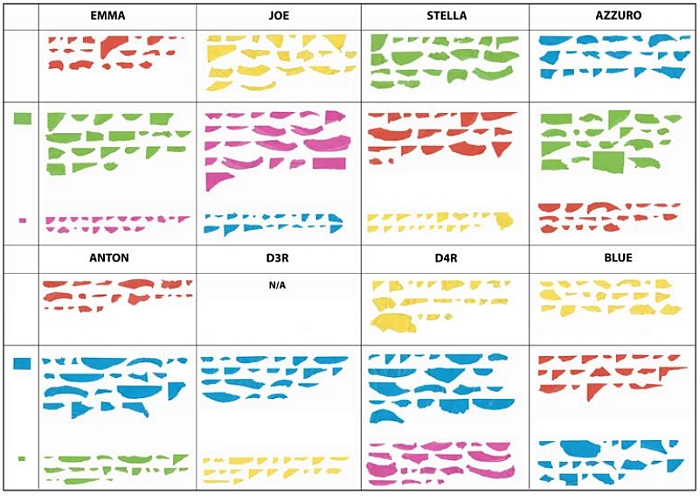 Scans of the crow-made vouchers. The top row under each crow is a baseline set before the birds were exposed to the templates. (Jelbert et al./Scientific Reports)

And here comes the really fun part. After each conditioning phase, the birds were given a larger sheet of cardboard.

Without being shown what to do, the crows went ahead and used their talons and beaks to tear these sheets into sizes approximating the size of the correct voucher, thus fashioning their own tool for the vending machine they already knew how to use.

Some, as the above graphic shows, were definitely better at it than others; but the smarter crows showed a clear aptitude for memorising the size of the card, and replicating it as best they could.

In the wild, the researchers noted, fidelity between memorised designs and what the crows recreate could be higher, since the cardboard used in the experiment doesn't rip in straight lines; but a leaf torn by a crow's beak is likely an easier shape for a crow to replicate.

Further experimentation would also need to be conducted to find out how long a crow can remember a tool shape, since the delay between remembering a shape and implementing it would likely be longer in the wild than in the rapid experimentation conditions.

But it's a fascinating development in understanding the amazing smarts of corvids.

"Our results provide the first demonstration, to our knowledge, that a non-human, tool-making species can manufacture items that match the size of previously rewarded templates," the researchers wrote in their paper.

The research was published in the journal Nature Scientific Reports.