NASA's Curiosity rover has drilled down into Mars to collect samples, and it's revealed that just under the dusty red surface, the Red Planet is actually a greyish blue.

The drilling happened at a site called Telegraph Peak, right up in a region called Pahrump Hills, where Curiosity has been working for the past five months. It's been drilling into the rocky surface to get some idea of how and when Mars evolved from a wet environment to the dry and dusty one we see today, and in the process has discovered that the dusty red top layer is made up of completely different stuff than the actual planet itself.

Scientists have known for years that Mars is made up mostly of silicon and oxygen, plus iron, magnesium, aluminium, calcium, and potassium. But by analysing the chemical make-up of the blueish-grey samples extracted from Telegraph Peak using the Alpha Particle X-ray Spectrometer (APXS) on the rover's arm - nicknamed ChemCam - and its internal Chemistry and Mineralogy (CheMin) instrument, the team at NASA has now found that this particular site is super high in silicon.

"When you graph the ratios of silica to magnesium and silica to aluminium, 'Telegraph Peak' is toward the end of the range we've seen," Curiosity co-investigator Doug Ming, from the NASA Johnson Space Centre in the US, said in a press release. "It's what you would expect if there has been some acidic leaching. We want to see what minerals are present where we found this chemistry." 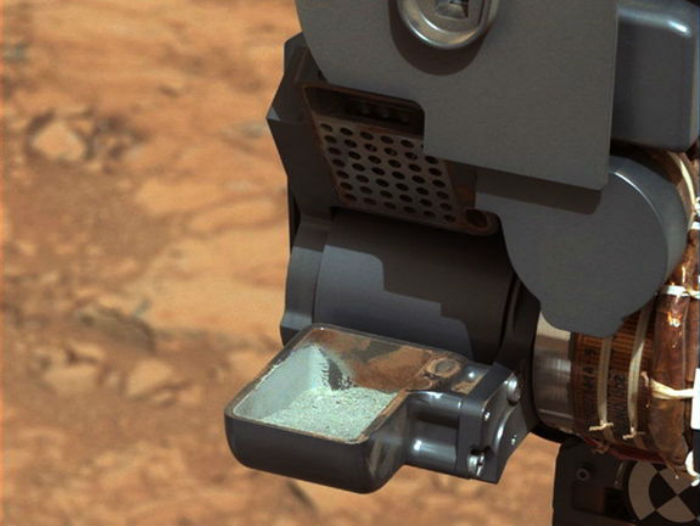 Curiosity also has access to equipment at a Mars lab, called the Sample Analysis at Mars (SAM) Instrument Suite, which the researchers might use to further analyse the rocks remotely.

"As the whole Internet learned this week, the way your eye and brain perceive colour can be misleading, so we like to use the Mastcam filters and ChemCam passive spectra to really get an accurate idea of the colour of our drill tailings," one of the team ChemCam team members and planetary scientist, Ryan Anderson, wrote at the U.S. Geological Survey website.

"We're sort of seeing a new colouration for Mars here, and it's an exciting one to us," Joel Hurowitz, sampling system scientist for Curiosity at NASA's Jet Propulsion Laboratory (JPL), told Mike Wall at Space.com.

So why the difference in colour? Scientists think that the dusty red layer that gives Mars its reddish hue is the result of the iron in the Martian rocks oxidising and rusting. Under this rusty layer, the rocks are protected from Mars's atmosphere, so remain blueish-grey. The grey powder Curiosity collected "may preserve some indication of what iron was doing in these samples without the effect of some later oxidative process that would've rusted the rocks into this orange colour that is sort of typical of Mars," Hurowitz told Space.com.

The Curiosity rover will now be journeying away from Pahrump Hills to a site higher up on the planet's Mount Sharp.