Fragments of the Dead Sea Scrolls long believed to be entirely blank have now been shown to contain hidden text that hasn't been read for several decades, if not much, much longer.

The Dead Sea Scrolls, a set of ancient religious manuscripts dating back to the third century BCE, were discovered in caves in the West Bank in the 1940s. While hundreds of fragments of these mysterious old texts have been uncovered, there's still much we don't know about their shrouded origins.

A tiny piece of the puzzle just became clearer, though, thanks to a chance discovery in the UK. Scientists have realised that a set of blank fragments housed for over 20 years at the University of Manchester are not unmarked after all – and actually contain ancient inscriptions hidden to the eye, but viewable with the aid of multispectral imaging. 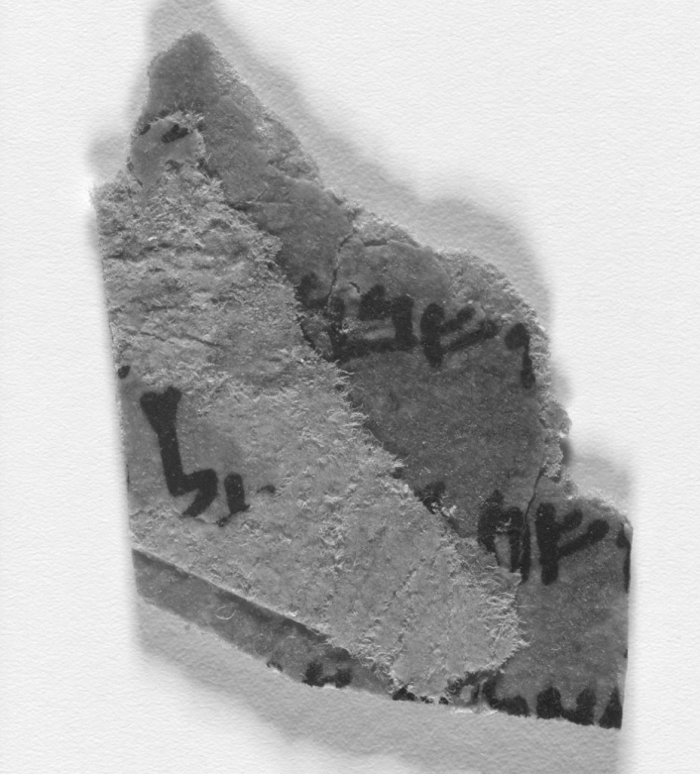 The scroll fragment under multispectral imaging. (University of Manchester)

The fragments in question were given to leather and parchment expert Ronald Reed at the University of Leeds in the 1950s, donated by the Jordanian government. The collection – which were all thought to be blank – were given for the purpose of scientific testing of the material by Reed, and since there didn't seem to be any text on the scroll pieces, they were deemed of little value to scholars.

Decades later in 1997, Reed's collection was passed along to the University of Manchester. It was only much more recently that historian and archaeologist Joan Taylor from King's College London realised, upon inspecting the fragments, that there might be more to them than their empty-looking parchment suggested.

"Looking at one of the fragments with a magnifying glass, I thought I saw a small, faded letter - a lamed, the Hebrew letter 'L'," says Taylor.

"Frankly, since all these fragments were supposed to be blank and had even been cut into for leather studies, I also thought I might be imagining things. But then it seemed maybe other fragments could have very faded letters too."

To find out the truth, Taylor and her team imaged 51 fragments in the Reed collection, identifying six that warranted further inspection. Of these, four were later found to contain readable Hebrew/Aramaic text written in carbon-based ink, in addition to other marks such as fragmentary characters and ruled lines. While the research is ongoing – with the full findings due to be published in an upcoming report – the researchers have revealed that the most substantial fragment shows four lines of partially preserved text, each featuring 15–16 letters.

In this section, the word Shabbat (Sabbath) can be read, and the researchers think the text could be related to the biblical book of Ezekiel (46:1–3).

"With new techniques for revealing ancient texts now available, I felt we had to know if these letters could be exposed," Taylor says.

"There are only a few on each fragment, but they are like missing pieces of a jigsaw puzzle you find under a sofa."

The discovery of a scattered handful of ancient characters on a piece of parchment might seem minor, but in the context of the Dead Sea Scrolls, no discovery is considered trivial. Such is the fervour of scholarly interest in these old texts, that individual fragments can be worth millions – creating a minefield of sorts in the field of biblical archaeology, with there now being a known problem of Dead Sea Scrolls forgeries.

That's not the case here, though, with the Reed collection sourced through the official excavations in the Qumran caves that originally unearthed the Dead Sea Scrolls.

The findings also means that the fragments studied here are the only authenticated textual fragments of the Dead Sea Scrolls held by any institution in the UK.

More information about the ongoing research project can be found here.