The lower mantle is the thick fourth layer in. (johan63/iStock/Getty Images)
NATURE

Scientists have detected the deepest earthquake ever, a staggering 467 miles (751 kilometers) below the Earth's surface.

That depth puts the quake in the lower mantle, where seismologists expected earthquakes to be impossible. That's because under extreme pressures, rocks are more likely to bend and deform than they are to break with a sudden release of energy.

But minerals don't always behave precisely as expected, said Pamela Burnley, a professor of geomaterials at the University of Nevada, Las Vegas, who was not involved in the research. Even at pressures where they should transform into different, less quake-prone states, they may linger in old configurations.

"Just because they ought to change doesn't mean they will," Burnley told Live Science. What the earthquake may reveal, then, is that the boundaries within Earth are fuzzier than they're often given credit for.

The quake, first reported in June in the journal Geophysical Research Letters, was a minor aftershock to a 7.9-magnitude quake that shook the Bonin Islands off mainland Japan in 2015. Researchers led by University of Arizona seismologist Eric Kiser detected the quake using Japan's Hi-net array of seismic stations.

The array is the most powerful system for detecting earthquakes in current use, said John Vidale, a seismologist at the University of Southern California who was not involved in the study. The quake was small and couldn't be felt at the surface, so sensitive instruments were needed to find it.

The depth of the earthquake still needs to be confirmed by other researchers, Vidale told Live Science, but the finding looks reliable. "They did a good job, so I tend to think it's probably right," Vidale said.

This makes the quake something of a head-scratcher. The vast majority of earthquakes are shallow, originating within the Earth's crust and upper mantle within the first 62 miles (100 km) under the surface.

In the crust, which extends down only about 12 miles (20 km) on average, the rocks are cold and brittle. When these rocks undergo stress, Burnley said, they can only bend a little before breaking, releasing energy like a coiled spring.

Deeper in the crust and lower mantle, the rocks are hotter and under higher pressures, which makes them less prone to break. But at this depth, earthquakes can happen when high pressures push on fluid-filled pores in the rocks, forcing the fluids out. Under these conditions, rocks are also prone to brittle breakage, Burnley said.

These kinds of dynamics can explain quakes as far down as 249 miles (400 km), which is still in the upper mantle. But even before the 2015 Bonin aftershock, quakes have been observed in the lower mantle, down to about 420 miles (670 km).

Those quakes have long been mysterious, Burnley said. The pores in the rocks that hold water have been squeezed shut, so fluids are no longer a trigger.

"At that depth, we think all of the water should be driven off, and we're definitely far, far away from where we would see classic brittle behavior," she said. "This has always been a dilemma." 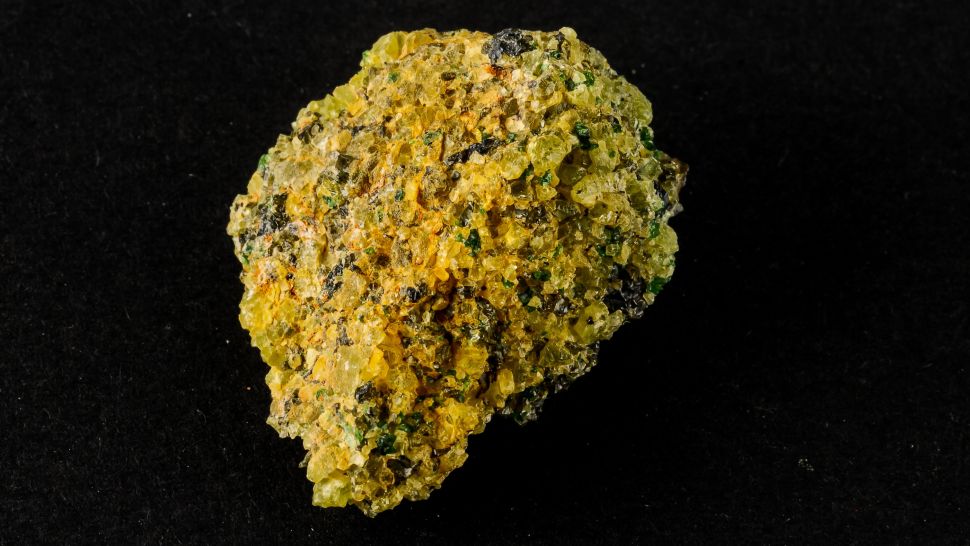 Much of Earth's mantle is made up of the mineral olivine. (underworld111/Getty Images)

The problem with earthquakes deeper than around 249 miles has to do with the ways the minerals behave under pressure. Much of the planet's mantle is made up of a mineral called olivine, which is shiny and green.

Around 249 miles down, the pressures caused olivine's atoms to rearrange into a different structure, a blue-ish mineral called wadsleyite. Another 62 miles (100 km) deeper, wadsleyite rearranges again into ringwoodite. Finally, around 423 miles (680 km) deep into the mantle, ringwoodite breaks down into two minerals, bridgmanite and periclase.

Geoscientists can't probe that far into the Earth directly, of course, but they can use lab equipment to recreate extreme pressures and create these changes at the surface. And because seismic waves move differently through different mineral phases, geophysicists can see signs of these changes by looking at vibrations caused by large earthquakes.

That last transition marks the end of the upper mantle and the beginning of the lower mantle. What's important about these mineral phases is not their names, but that each behaves differently. It's similar to graphite and diamonds, said Burnley.

As olivine transforms into its higher-pressure phrases, it becomes more likely to bend and less likely to break in a way that triggers earthquakes.

Geologists were puzzled by earthquakes in the upper mantle until the 1980s, and still don't all agree on why they occur there. Burnley and her doctoral advisor, mineralogist Harry Green, were the ones to come up with a potential explanation.

In experiments in the 1980s, the pair found that olivine mineral phases were not so neat and clean. In some conditions, for example, olivine can skip the wadsleyite phase and head straight to ringwoodite. And right at the transition from olivine to ringwoodite, under enough pressure, the mineral could actually break instead of bending.

Burnley and Green reported their finding in 1989 in the journal Nature, suggesting that this pressure in the transition zone could explain earthquakes below 249 miles.

The new Bonin earthquake is deeper than this transition zone, however. At 467 miles down, it originated in a spot that should be squarely in the lower mantle.

One possibility is that the boundary between the upper and lower mantle is just not exactly where seismologists expect it to be in the Bonin region, said Heidi Houston, a geophysicist at the University of Southern California who was not involved in the work.

The area off the Bonin island is a subduction zone where a slab of oceanic crust is diving beneath a slab of continental crust. This sort of thing tends to have a warping effect.

"It's a complicated place, we don't know exactly where this boundary between the upper and lower mantle is," Houston told Live Science.

The paper's authors argue that the subducting slab of crust may have essentially settled onto the lower mantle firmly enough to put the rocks there under a tremendous amount of stress, generating enough heat and pressure to cause a very unusual break.

Burnley, however, suspects the most likely explanation has to do with minerals behaving badly – or at least oddly.

The continental crust that plunges toward the center of the Earth is much cooler than the surrounding materials, she said, and that means that the minerals in the area might not be warm enough to complete the phase changes they are supposed to at a given pressure.

Again, diamonds and graphite are a good example, Burnley said. Diamonds aren't stable at Earth's surface, meaning they wouldn't form spontaneously, but they don't degrade into graphite when you stick them into engagement rings.

That's because there's a certain amount of energy the carbon atoms need to rearrange, and at Earth's surface temperatures, that energy isn't available. (Unless someone zaps the diamond with an X-ray laser.)

Something similar may happen at depth with olivine, Burnley said. The mineral might be under enough pressure to transform into a non-brittle phase, but if it's too cold – say, because of a giant slab of chilly continental crust all around it – it might stay olivine.

This could explain why an earthquake could originate in the lower crust: It's just not as hot down there as scientists expect it to be.

"My general thinking is that if the material is cold enough to build up enough stress to release it suddenly in an earthquake, it's also cold enough for the olivine to have been stuck in its olivine structure," Burnley said.

Whatever the cause of the quake, it's not likely to be repeated often, Houston said. Only about half of subduction zones around the world even experience deep earthquakes, and the kind of large quake that preceded this ultra-deep one only occurs every two to five years, on average.

"This is a pretty darn rare occurrence," she said.