Which bits of Game of Thrones get your pulse racing? According to a new study of viewer heart rates, there's a certain dramatic tension that tends to get the audience's blood pumping more than epic bouts of violence.

That's based on 2.3 million measurements from 300 viewers taken by the developers of the Cardiogram app for Apple Watch, which invited its users to enrol in a special experiment called "What Game of Thrones does to your Heart Rate".

Of the top five heart-racing moments, four largely involved dialogue, drama and tension between characters rather than sword-on-sword or dragon-on-army clashes.

Cardiogram has actually been tracking the link between Game of Thrones and heart rate for a number of years. In 2015, it showed how a particularly intense bout of White Walker zombie action was able to sharply increase heart rate beats-per-minute (BPM). 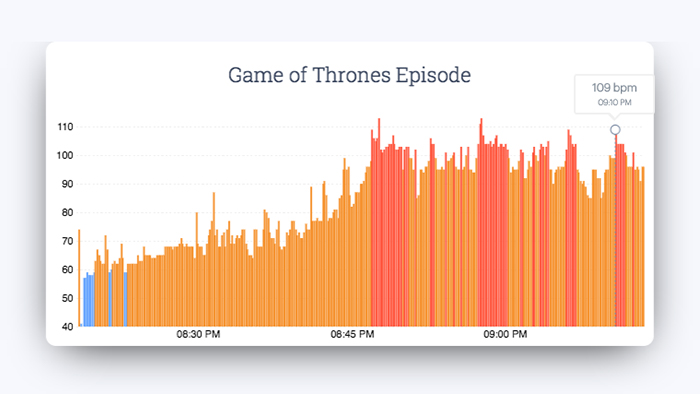 "It's almost like a Nielsen ratings on a second-by-second basis," Cardiogram developer and data scientist Brandon Ballinger told the Wall Street Journal at the time.

For the 2017 follow-up, Cardiogram tracked heart rates across the first four episodes of season 7 before crunching the data to see which bits got viewers most excited.

Participants were asked to use the app to log their heart rate every five seconds, starting from a quarter of an hour before each episode started (the default on the Apple Watch is to take a measurement every five minutes).

WARNING! Spoilers below for those first four episodes of season 7.

You've been warned. We have warned you.

In reverse order, Daenerys interrogation of Varys about some of his previous skullduggery got the audience's heart rate up to 76 bpm on average, the fifth highest rate across the first four episodes of season 7.

Then there's a tie for third and fourth place:  Euron Greyjoy's dramatic proposal to Cersei in episode 1, and Davos and Jon's plea for help to Daenerys in episode 3 both saw a spike to 83 bpm on average.

Second in the list was the opening scene of the whole season, when Arya Stark takes her revenge on House Frey in disguise. That had viewers' heart rates racing all the way up to 83.2 beats per minute, but again it was mostly a dialogue-driven scene.

Top of the pile though was a moment that did involve some physical action – with 91 bpm on average, it was Jaime Lannister's charge against Daenerys and her dragon Drogon, as seen at the end of episode 4.

"This is the one action scene in the top five," says Ballinger, though it did rely on the character conflicts that had already been established.

"True to principle, it focuses on a conflict between two main characters on opposite sides of a battle: Jaime Lannister and Daenerys Targaryen, immediately preceded by a scene showing Tyrion Lannister's internal conflict at seeing his family's army set aflame."

No room in the top five for the Unsullied army capturing Casterly Rock then, or Euron Greyjoy ambushing his family's naval fleet, or any of the other big action sequences we've seen so far in season 7.

There is some serious science behind Cardiogram: in May, the developers of the app and researchers from the University of California, San Francisco, showed how it could be used to detect atrial fibrillation, which is an issue with an irregular heartbeat.

As wearables like the Apple Watch become more common, they could be invaluable in flagging up health issues that would otherwise require an appointment with the doctor.

At the same time there's plenty of scope for fun projects like this Game of Thrones one. Maybe you could test yourself the next time an episode airs.

"The data confirms that drama rather than action is what makes Game of Thrones viewers' heart rate race," says Ballinger.