If a person's liver starts failing, the only medical option we currently have is to replace this vital organ, either partially or fully. But now, the discovery of a new type of liver cell has scientists hoping for a less invasive and risky treatment alternative.

By sequencing cells in human foetal liver tissue, researchers have pinpointed a previously unknown cell that might hold similar properties to a stem cell. If the new finding lives up to its potential, the authors hope this type of cell could one day help to regenerate damaged livers without the need for transplantation.

"For the first time, we have found that cells with true stem cell-like properties may well exist in the human liver," says hepatologist Tamir Rashid from King's College London.

"This, in turn, could provide a wide range of regenerative medicine applications for treating liver disease, including the possibility of bypassing the need for liver transplants."

In both cases, although their expression was slightly different, the team noticed the presence of a specific type of cell, hereby known as a hepatobiliary hybrid progenitor cell, or an HHyP for short.

Upon examining these cells more closely, the study authors noticed that human HHyPs held a striking resemblance to certain mouse progenitor cells, which have been shown to rapidly repair a rodent's liver following major injury. Until now, however, no such parallel had ever been found in humans.

"Capturing a human hepatic progenitor state in utero provides unparalleled and unexplored insight into the true mechanisms of human liver development," the team writes in their study.

'Progenitor cells' and 'stem cells' are biological terms that are sometimes used interchangeably, but there are important differences. Progenitors work in a similar way to stem cells in that they are able to differentiate themselves into another type of cell altogether.

Unlike stem cells however, progenitors can only undergo a finite number of replications and they are limited to making only a few different types of cells.

In this case, the newly-discovered HHyPs appear to be a precursor to two main liver cells, which are distinct from all others - one for the liver, called hepatocytes, and the other for the bile duct, called cholangiocytes or BEC's. 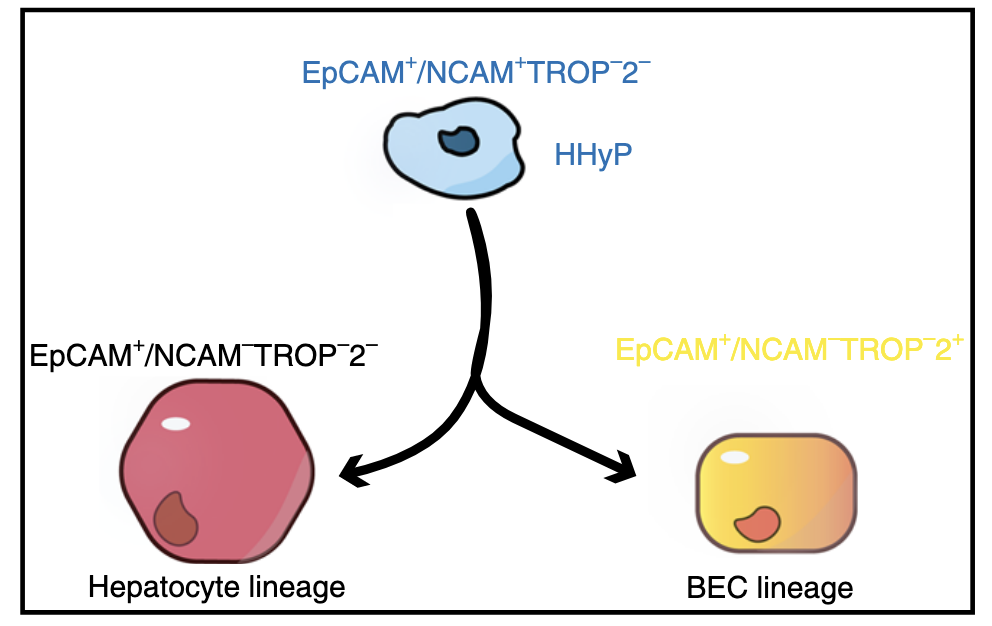 Following acute liver injury in rats, recent studies have shown that these two types of cells can restore liver mass and function. What's more, when one of these cells is impaired in the rat, the other type can step up to fill the void.

To see how they cope in a live animal, the researchers thus injected human foetal HHyPs into the kidney capsule of immunodeficient mice. After just four weeks, the results show that the HHyP cell population was not only proliferating in these rodent kidneys, they were also differentiating into hepatocytes.

(Segal et al., Nature Communications, 2019)Obviously, we are still a long way off from using these progenitors to replace liver transplants in people, but these preliminary results are a fascinating step forward. And the study authors are already thinking of the possibilities.

If induced pluripotent stem cells can be turned into HHyP cells and then transplanted into a damaged liver, the team thinks it could help regenerate tissue damage. The other solution is slightly more radical and would require somehow triggering these cells while they are still in an adult person's liver.

"We now need to work quickly to unlock the recipe for converting pluripotent stem cells into HHyPs so that we could transplant those cells into patients at will," explains Rashid.

"In the longer term, we will also be working to see if we can reprogram HHyPs within the body using traditional pharmacological drugs to repair diseased livers without either cell or organ transplantation."

This research has been published in Nature Communications.