Scientists Have Unearthed Traces of an Ancient Rainforest In… Antarctica

Since time immemorial, Earth's poles have resembled frozen wastelands. Life can and does exist there, but there are sound reasons why humans and most other animals cling to the safety of more hospitable climates closer to the equator.

They were not always wastelands, though. We know that in our planet's ancient past, conditions were vastly different. In the mid-Cretaceous Period, about 90 million years ago, dense concentrations of atmospheric CO2 would have created much hotter global temperatures, melting polar ice sheets, and sending sea levels soaring to up to 170 metres (558 feet) higher than they are today.

What would the South Pole have looked like in a world like that? Thanks to a stunning scientific discovery, we have our answer.

In 2017, during an expedition aboard the RV Polarstern in the Amundsen Sea, researchers drilled deep into the ground underneath the seabed of West Antarctica, close to the location of the Pine Island and Thwaites glaciers, and only about 900 kilometres (560 miles) away from the South Pole. 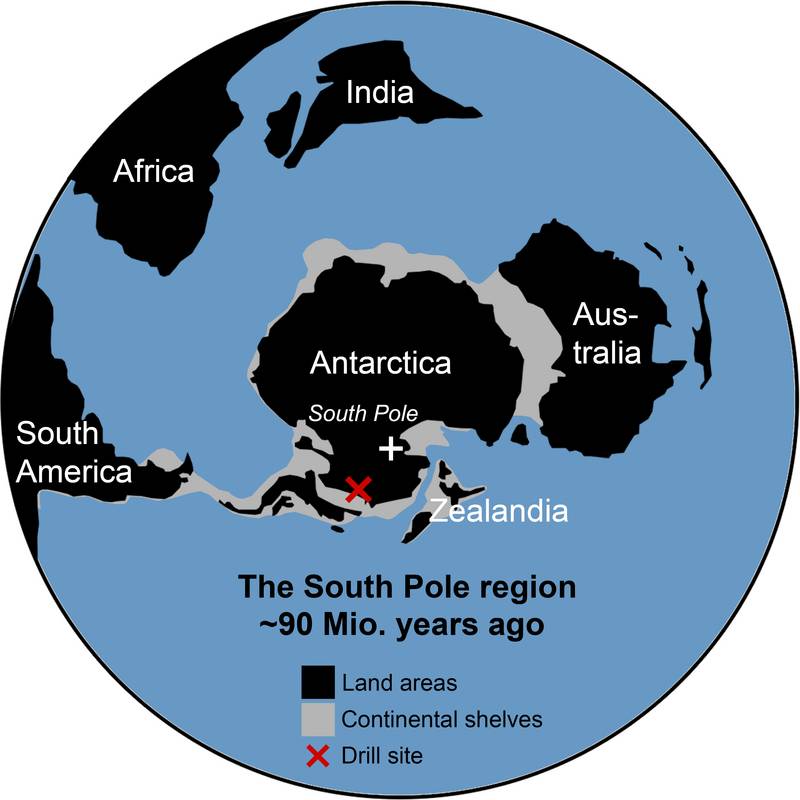 Above: Simplified overview map of the South Polar region at time of deposition ~90 million years ago.

What they pulled up, particularly at depths of around 30 metres, starkly contrasted with the sediment composition resting closer to the surface.

"During the initial shipboard assessments, the unusual colouration of the sediment layer quickly caught our attention," says geologist Johann Klages from the Alfred Wegener Institute, Helmholtz Centre for Polar and Marine Research in Germany.

"The first analyses indicated that, at a depth of 27 to 30 metres (88 to 98 ft) below the ocean floor, we had found a layer originally formed on land, not in the ocean." 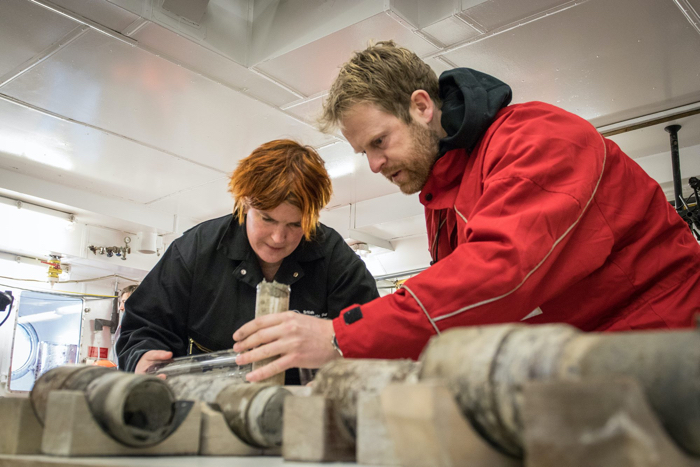 They were in uncharted territory, in more ways than one. Nobody had ever pulled a Cretaceous Period sample out of the ground from such a southern point on the globe. Even so, the researchers can't have been prepared for what closer examination with X-ray computed tomography (CT) scans would reveal.

Back on land, scans described an intricate network of fossilised plant roots. Microscopic analyses also found evidence of pollen and spores, all pointing to the preserved remains of an ancient rainforest that existed in Antarctica approximately 90 million years ago, eons before the landscape was transformed into a barren province of ice.

"The numerous plant remains indicate that the coast of West Antarctica was, back then, a dense temperate, swampy forest, similar to the forests found in New Zealand today," says palaeoecologist Ulrich Salzmann from Northumbria University in the UK.

The implications of this unprecedented find don't just tell us polar plant life existed way back when. They also hint something about how such a thing could have been possible.

By the team's estimates, thanks to the creeping drift of continental plates the drill site would have been several hundred kilometres closer to the South Pole back when dinosaurs still roamed. Then, as now, the South Pole would have been subjected to four months of unyielding darkness during the Antarctic winter. How could this ancient rainforest thrive, deprived of the Sun for so long?

To figure this out, the researchers used modelling to reconstruct what the ancient climate of this long-gone forest region might have been like, based on biological and geochemical data contained in the soil sample.

According to the simulations, atmospheric CO2 levels during the the mid-Cretaceous would have been significantly higher than scientists realised.

In this super-heated environment (with an annual average air temperature of around 12 degrees Celsius or 54 degrees Fahrenheit in the Antarctic), dense vegetation would have covered the entire Antarctic continent, and the ice sheets we know today – along with their associated cooling effects – would have been non-existent.

"Before our study, the general assumption was that the global carbon dioxide concentration in the Cretaceous was roughly 1,000 parts per million (ppm)," explains geoscientist Torsten Bickert from the University of Bremen in Germany.

"But in our model-based experiments, it took concentration levels of 1,120 to 1,680 ppm to reach the average temperatures back then in the Antarctic."

There's a lot to dig through in the new findings, but at the very least, they provide researchers with a far greater understanding of the deep ties between CO2 concentration and polar climates in prehistoric times when dinosaurs still roamed the Earth.

It's a history lesson that could hold grave significance for the planet's future, given the way contemporary CO2 levels are currently skyrocketing – a dangerous curve that warrants flattening.

Unless, that is, we want to invite forests into Earth's coldest places once more, and to let oceans redraw all maps.

"We need to look into these extreme climates that happened on the planet already, because they show us what a greenhouse climate looks like," Klages told Vice.

"We are definitely in an interesting time because if we continue what we're doing right now, then it could lead into something that we can't control anymore."