The ancient Egyptian city of Heracleion was once a bustling trading port. Now, it lies 45 metres (about 148 feet) under the Mediterranean Sea. Recently, divers have revealed perhaps the best find since the submerged city was rediscovered two decades ago.

In their most recent underwater expedition, Egyptian and European experts have found significant remains of a large temple under the sea, as well as several ships laden with treasure such as coins and jewellery.

Archaeologists led by Franck Goddio, who was also in charge of the very first underwater exploration of Heracleion, think they have found the stone columns from the city's main temple (called Amun Garp), as well as the remains of a smaller Greek temple.

The remarkable treasures show how the enchanting site is still revealing its secrets many years after it was first explored, as thousands of years of sediment and mud get sifted through.

Such discoveries have been made possible thanks to a range of sophisticated scanning tools that can discern objects on the seabed floor and even beneath it, despite the obfuscating sediment.

Joining together geophysical data from satellite positioning, echo sounders, nuclear magnetic resonance magnetometers and side-scan sonar, researchers have acquired such comprehensive scans, that the team discovered a group of ports close by Heracleion that weren't previously known about.

Armed with this information, archaeological divers then plunged down to the remains for a closer look. As for the other finds besides the temples, the divers report coming across bronze coins from the reign of King Ptolemy II (283 to 246 BCE), plus pottery, jewellery, and storage utensils found in the remains of several ships.

The archaeologists also dug up coins from the Byzantine era, which means it's likely that the city was inhabited from at least the fourth century BCE. Another finding was the missing part of a ceremonial boat that had been found on a previous excavation.

Further discoveries were made at Canopus, another nearby submerged city. These included coins from the Ptolemaic and Byzantine eras, plus rings and earrings from Ptolemaic times. 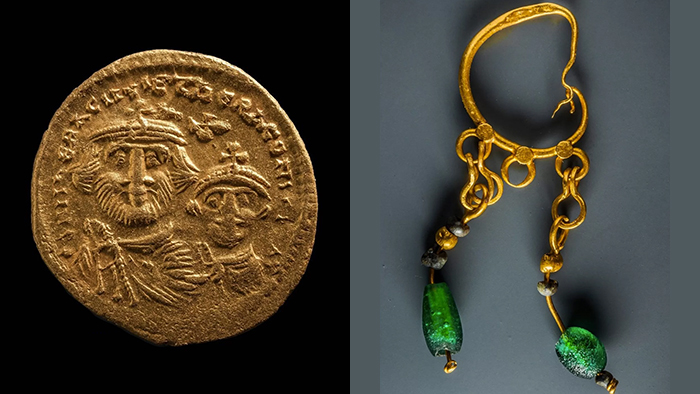 Heracleion (also known as Thonis) is thought to have been built during the 8th century BCE on the banks of the Nile river, and is so named because the hero Hercules himself once visited it – or so the legend goes. It's now known informally as Egypt's Atlantis.

"The objects recovered from the excavations illustrate the cities' beauty and glory, the magnificence of their grand temples and the abundance of historic evidence," states a project description on Goddio's website.

Exactly how it ended up underwater remains a mystery to historians, but the best guess is that rising sea levels, seismic activity, and crumbling foundations caused the entire city to slide into the Mediterranean, at least 1,000 years ago.

Now the team of deep sea archaeologists is preparing their findings for publication in a scientific journal. It's going to be fascinating to find out what Heracleion turns up next; Goddio estimates that only about 5 percent of the city has so far been revealed.