Dolphins Keep Dying on a Beach in Brazil, And No One Knows Why

Scientists are stumped by scores of dolphin carcasses washing up on a beach close to Rio de Janeiro in Brazil. More than 100 dead dolphins have been recovered from the Bay of Sepetiba in the past month, and no one can figure out a reason why.

The lifeless grey dolphins have been turning up at a rate of up to four or five a day since the middle of December, and the current figure represents more than 10 percent of the local population, thought to be in the region of 800 dolphins.

That's a worryingly high number, and conservationists are frantically trying to pinpoint what's behind the deaths. Dolphin skin, blood, and bone are all being examined for traces of bacteria or a virus, reports Elaina Zachos at National Geographic.

"We've never experienced this before," biologist Leonardo Flach from the Boto Cinza Institute told Aicha El Hammar at ABC News. "It's a tragedy."

"One day we will find dolphin corpses that are male and adults, and the next day, female and puppies. But most of them are skinny and with deep skin lesions. I've never seen anything like that." 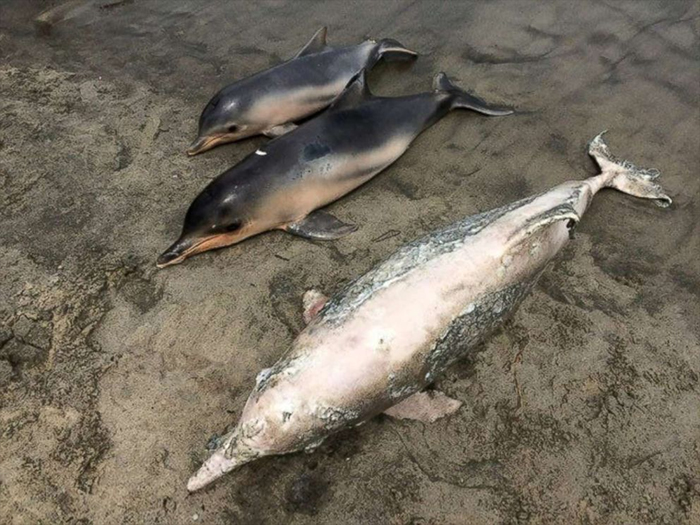 According to Flach, up to 70 or 80 percent of the local dolphin population could die if a pathogen-related disease is found to be to blame. For one of the highest concentrations of dolphins in the world, that would be devastating.

Under normal circumstances, around five dolphin carcasses are found each month: usually overfishing, pollution, or illegal hunting is to blame. The Bay is surrounded by shipyards, ports, and residential buildings.

Now Flach and his fellow environmentalists want to pressure the authorities into officially recognising these dolphins as an endangered species and taking steps to save them.

At the moment this type of grey dolphin is marked as "data deficient" – as in, more data is needed to properly assess the risk the species is under.

The situation is still ongoing, with another five carcasses collected this week, taking the total since mid-December up to 102. With lab results from tests on the dead dolphins expected by the end of the month, Flach and his colleagues want to see a marine refuge set up in the area.

That would provide a controlled environment in which the spread of bacteria could be controlled, giving conservationists the chance to monitor the dolphins. Part of the problem is that these mammals usually live in tight-knit social groups.

"We hope to be able to put more pressure on the officials to help us to save the dolphins," says Flach. "Otherwise it will be very quick."