One group of researchers has infused a slippery surface with molecules that disrupt bacterial communication. Others have shown that silver nanoparticle coatings can destroy bacteria. Yet another group used black silicon to create a surface that resembled a tiny 'bed of nails' (nanopillars), which physically rip bacteria apart.

That latter example, which falls into a broad category known as nano-textured surfaces (NTS), is of particular interest, because it also exists in nature. The nanostructure of black silicon is very similar to that of dragonfly wings.

And just like their elemental counterpart, dragonfly wings kill bacteria.

It is widely thought that a 'bed of nails' surface destroys bacteria through puncturing the cell wall. But in newly published research based on extensive use of various microscopy techniques, a team of Australian and Nigerian researchers demonstrated that an entirely different killing mechanism may be at play.

The first clue that the conventional wisdom was wrong came from the observation that nanopillars on dragonfly wings were not all the same height, as the photograph below shows:

This stands in contrast to synthetic 'bed of nails' surfaces, which tend to produce nanopillars of equal height.

A closer examination further demonstrated that the bacterial membrane does not come into direct contact with the nanopillars.

Rather, bacteria (in this case, E. coli) attach to the nanopillars via structural molecules secreted by the bacteria, known as 'extracellular polymeric substances' (EPSs), which you can see in the image below, as well as by 'finger-like' extensions.

Once the bacteria land on the surface, they are subjected to adhesive forces. These can deform the bacterial membrane, but by themselves, probably do not cause the bacteria to rupture.

Instead, the bacteria are essentially caught in one of those sinister traps of which movie villains are quite fond. If they don't move, the bacteria might survive.

However, when they do move, shear forces pull on the EPSs, ripping the membrane apart. This results in a fatal leakage of cellular contents, which causes the cell to deflate like a balloon, as you can see in the image below: 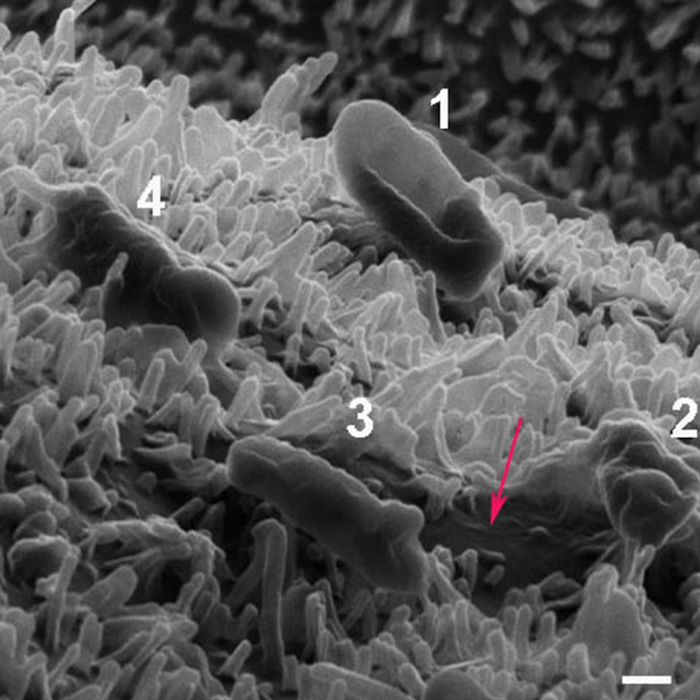 Only after the cell is dead do the nanopillars penetrate it.

The authors conclude with a diagram comparing the old model of cell death via nanopillar with their new model:

The top panel, which depicts the old model, shows that nanopillars pierce bacterial cells directly. The authors believe this understanding should be replaced with their new model, depicted in the bottom panel.

In this model, bacteria do not contact the nanopillars directly, but via secreted substances. When they attempt to move, shear forces rip holes in the membrane, causing a fatal leakage of cellular content, only after which the nanopillars pierce the cell.

The study has a few limitations. First, it was performed on E. coli, a Gram-negative bacterium with two membranes.

The authors should repeat their analysis with Gram-positive bacteria that contain only one membrane.

Second, they should repeat their analysis using bacteria that do not produce as much EPSs to see if nanopillars are still lethal to them.

Finally, they should determine if synthetic nano-textured surfaces, which produce nanopillars of the same height, kill bacteria via the old model or via their new proposed mechanism.

Gaining insights into how nature works will invariably help those scientists wishing to mimic it. And it provides an interesting explanation for why dragonfly wings are so clean.

The research has been published in ACS Applied Materials & Interfaces.

This story was originally published by the American Council of Science and Health. Read the original story.