Scientists said Monday they had used a drone to observe the rapid fracturing and draining of a lake on the Greenland ice sheet, a phenomenon that may become more frequent as a result of climate change.

The ice sheet is typically about a kilometre thick (1090 yards), and during summer, it is normal for some of the surface to melt and form thousands of lakes.

Many of the lakes drain in just a few hours, creating vast openings at the base of the ice, up to a kilometre deep. Meltwater from surface streams continues to flow down them for the rest of the melt season, creating some of the world's largest waterfalls. 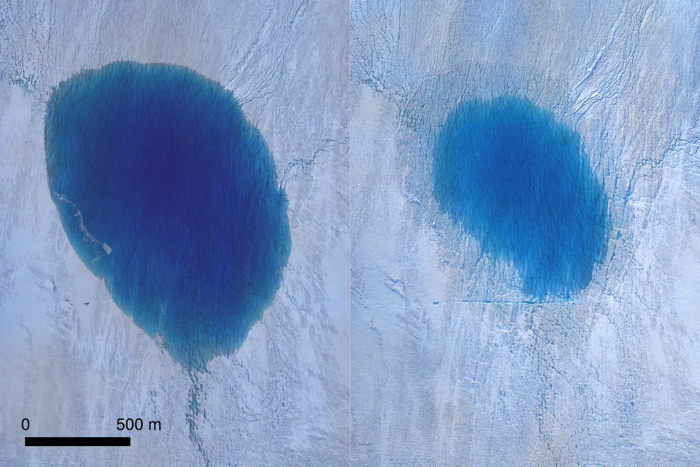 Temporary meltwater lake, before and after drainage. (Thomas R. Chudley)

This process has been extremely difficult to observe firsthand, but a group of glaciologists from the Scott Polar Institute at the University of Cambridge were fortunate when they arrived at the Store Glacier in northwest Greenland in July 2018.

A few days after their arrival, over the course of five hours, two-thirds of the lakes or roughly 5 million litres of water disappeared from the surface through a fracture.

Aerial photography captured by the drone from before and after showed a dark blue oval shrink into a smaller, shallower and lighter blue circle.

Tom Chudley, co-first author of the study that appeared in the Proceedings of the National Academy of Sciences told AFP that the "thing that drones can do is allow us to take these kind of high quality measurements in regions that aren't safe to access for scientists on the ground".

By making use of on-board GPS, the team was able to geo-locate and stitch together thousands of photos that were in turn used to create detailed 3D reconstructions of the ice sheet's surface. 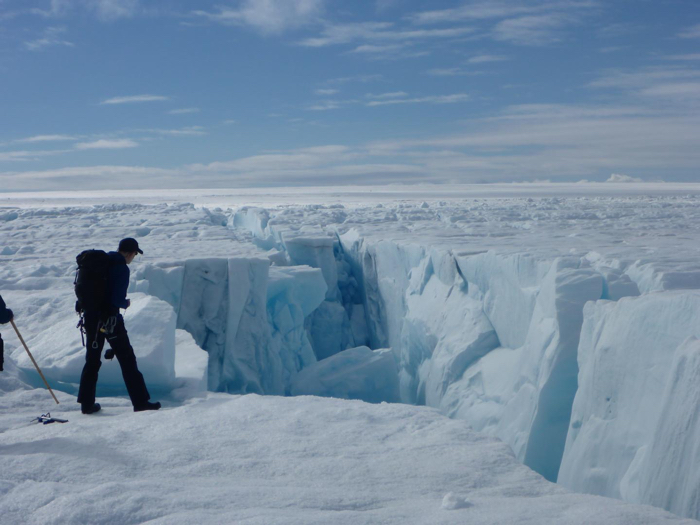 A glacier is a river of ice that moves slowly under its own weight toward the ocean. When it reaches the sea, it breaks off into icebergs, which represent about 40 percent of Greenland's contribution to rising sea levels (the rest is from the actual melting of the glaciers).

The Store Glacier advances at a rate of 600 metres per year (660 yards). The team, which also included scientists from Aberystwyth and Lancaster Universities, found that the sudden drainage of the lake temporarily increased its speed from two to five metres per day.

The water that fell under the ice served as a lubricant.

Even more surprising was that this bed of water lifted the glacier's height by 55 centimetres (22 inches), the team said.

"That's a kilometre of ice lifted up half a meter, so you can imagine the kind of pressures that were involved," said Chudley, a doctoral student at Cambridge.

The team's paper describes in fuller detail the formation of these vast fractures, which in turn create water beds that accelerate the glacier's movement.

"Potentially we're increasing the amount of lakes that are draining in new places that we haven't previously identified," he warned.