Two years ago, researchers from Deft University of Technology in the Netherlands came up with a design for a windwheel that could generate electricity without any moving parts, imagining that it could offer a safer and quieter alternative to wind turbines.

Now Dutch architects have taken their idea and run with it, designing a giant version of the windwheel that would not only generate enough electricity to power 1,000 homes, but would soak up solar energy, collect and recycle water, and also serve as a tourist attraction, a hotel, and a home packed with 72 apartments.

As you can see, that all looks pretty damn impressive. People in the Netherlands have famously been using wind energy for centuries with their windmills, which convert the kinetic energy of wind into mechanical energy through the spinning blade, but this new set-up uses something called electrostatic wind-energy conversion, which involves wind pushing charged particles against the force of an electric field.

The only problem is that so far no one has actually demonstrated that the technology works on such a large scale - the current prototype tabletop-sized. Still, according to the Dutch Windwheel company and the Deft University researchers who came up with the idea, the technology should theoretically be easily scalable, and can be used anywhere there's wind. You can see how it works in this video from 2013:

The new windwheel design is slightly more ambitious, at 173-metres (570-feet) tall, and is made up of two parts: an outer wheel, which would act as a London Eye-esque Ferris wheel that shows off the skyline of the Dutch city of Rotterdam, as well as a view below its canal, with 40 rotating, glass cabins; and an inner wheel that would offer some sleek office space, a seven-storey hotel, 72 apartments, and a restaurant with sweeping views of the city.

“We wanted a 100-percent-sustainable building that serves as a platform for all kinds of innovations,” developer Lennart Graaff from the company behind the new design, Dutch Windwheel, told Mary Beth Griggs over at Popular Science.

This all sounds (and looks) like something out of science fiction, but the physics behind the design is solid. The proposed structure would be built right on top of a water source, such as a canal, and will use that water to spray positively charged water molecules across the hollow centre of the windwheel. When the wind pushes these charged droplets away from the wheel's high-voltage electric field, it will create a negative charge.

This charge will form a current as the electricity discharges. "Much like when the negative charge that builds up in thunderclouds discharges to the ground via lightning strike," Griggs writes for Popular Science. The electricity will then be converted into AC and used to power the windwheel, or stored in an industrial battery, and according to Graaf, will be capable of generating 1 MW of electricity, which is enough to power roughly 1,000 average US homes.

But so far the miniature prototype windwheel produces just 12.5 milliwatts, which isn't enough to power a lightbulb, and has only reached 3 precent efficiency. With traditional wind turbines currently at around 45 percent efficiency, the windwheel clearly has a long way to go before it becomes an affordable option. But with additional investment and research, Graaf believes the giant design could be up and running in Rotterdam by 2025.

The wheel also has proposed systems in place to generate additional energy from solar panels, and also collect and recycle tap water, as you can see in the sketches below: 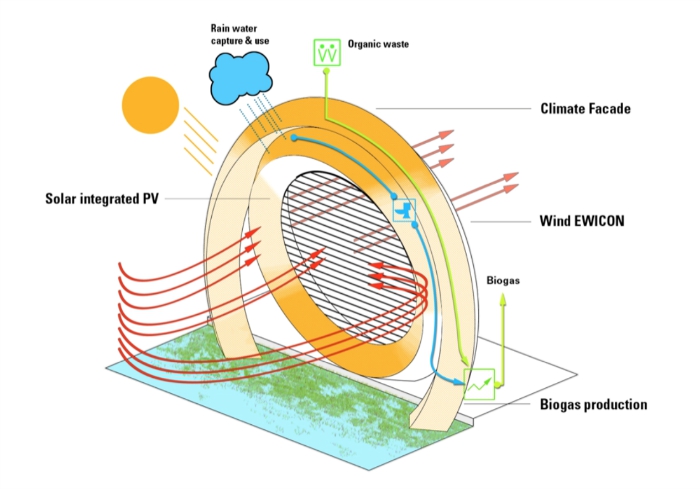 We obviously need to see a larger working windwheel prototype - as well as the efficiency of the design go way up - before we get too excited. But an energy-harvesting structure that can house people and add something unique to a city skyline? That's pretty special.