We humans like to put labels and boundaries on things. For example, the boundary between Earth's atmosphere and space is the Kármán line, the point at 100 kilometres (62 miles) altitude where aeronautics end, and astronautics take over.

But Earth's atmosphere is way more complicated than that (there's even some debate about where the Kármán line should be). Now a team of astronomers has discovered that it's bigger than we even thought - extending all the way out to the Moon, and as far again.

The region is called the geocorona, part of an atmospheric layer called the exosphere. It's a tenuous cloud of neutral hydrogen that glows in far-ultraviolet light.

Because it's so thin, it's been hard to measure; previously, its upper limit was thought to be around 200,000 kilometres (124,000 miles) from Earth, because that's the point at which solar radiation pressure would override Earth's gravity.

Well, according to data from the Solar and Heliospheric Observatory (SOHO) co-owned by the European Space Agency and NASA, that limit doesn't even come close. The geocorona, scientists have found, extends out to as much as 630,000 kilometres (391,000 miles).

Which means it engulfs our beloved satellite in an atmospheric hug. 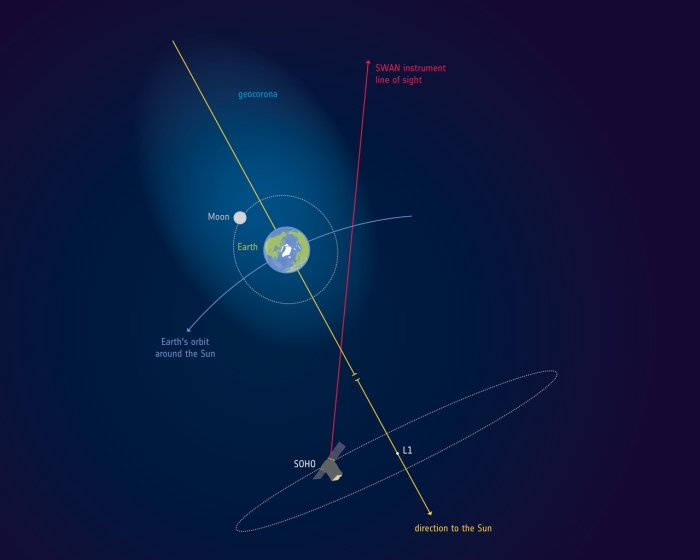 Illustration (not to scale) of the geocorona. (ESA)

What makes it even more amazing is that SOHO made these observations over two decades ago, between 1996 and 1998. The data had just been sitting in an archive, waiting for someone to get around to analysing it.

The readings had been taken specifically to map the geocorona using the observatory's SWAN instrument, a sensitive piece of equipment designed to measure far-ultraviolet emissions from hydrogen atoms, called Lyman-alpha photons.

We can't see these from Earth - they're absorbed by the inner layers of the atmosphere - so we need instruments out there in space to look for them. Apollo 16 astronauts, for instance, were able to take a photograph of the geocorona in 1972 - not even knowing they were still inside it. Photo of the geocorona taken from the Moon by Apollo 16 astronauts. (NASA)

The SWAN instrument can selectively measure light from the geocorona, filtering out Lyman-alpha emissions from farther out in space, and this is what allowed for the more accurate map.

As well as the surprising size of the thing, it revealed a strange effect of the Sun.

On Earth's day-side, the hydrogen atoms are compressed by sunlight, resulting in a density of 70 atoms per cubic centimetre, thinning out to 0.2 atoms at lunar orbit (that's not very dense at all - it's still effectively a vacuum).

On the night side, the hydrogen density is higher due to solar radiation pressure - it kind of ends up looking a comet tail.

While the hydrogen atoms do scatter ultraviolet radiation, the quantity is negligible, especially compared to the vast amounts being blasted out by the Sun, making space a hazardous radiation environment for astronauts.

So, knowing the full extent of the geocorona isn't going to make much difference for space exploration.

What the discovery does mean is that any space telescopes within the geocorona will likely need to adjust their Lyman-alpha baselines for deep-space observations.

"Space telescopes observing the sky in ultraviolet wavelengths to study the chemical composition of stars and galaxies would need to take this into account," said astronomer Jean-Loup Bertaux of the French National Centre for Scientific Research (CNRS), and former principal investigator of SWAN.

You know what's even more interesting? That means no human being has ever actually been outside of Earth's atmosphere. Guess we've got some work to do…

The team's research has been published in the Journal of Geophysical Research: Space Physics.