What goes down at the very center of our planet is largely a mystery, and so is what goes up.

The truth is, no human has ever made it past the crust, or dug deep enough to penetrate Earth's rocky mantle, let alone its liquid iron core, so we don't know what type of interactions take place here. And that's not for a lack of trying.

Sitting at a depth of roughly 2,900 kilometres (1,800 miles), our planet's core lies far beyond our technological reach - at least for now - and yet through educated guesswork and clever theoretical models, scientists have drawn a window into some of the enigmas lying beneath our feet.

New research now suggests Earth's molten core may actually be leaking iron into the upper mantle, which is more than a thousand degrees cooler than the liquid nucleus.

For decades, scientists have debated whether or not the core and the mantle exchange physical material.

Earth's powerful magnetic field and its electric currents certainly imply there's lots of iron down in the core. Plus, samples of mantle rocks brought to the surface show a significant chunk of iron as well, leading some to speculate the material is coming all the way from the core.

To gain some insight into whether this could be possible, researchers have drawn on experiments in the lab showing how iron isotopes move between areas of different temperatures under high pressure and temperature. 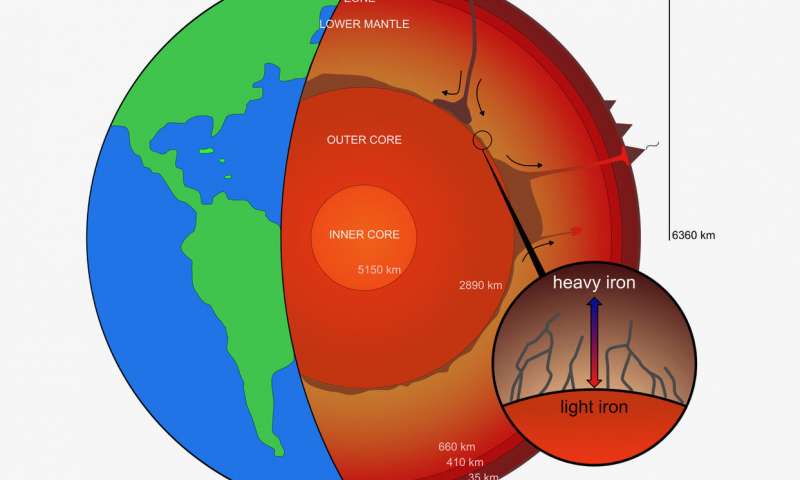 Using this information to create a model, the team's results suggest that heavy iron isotopes could be migrating from the Earth's hot core out to the cooler mantle. While the light iron isotopes would do the opposite and move from cool to hot back down into the core.

These results are still theoretical, but they could teach us something important about how our planet's interior works.

"If correct, this stands to improve our understanding of core-mantle interaction," says geologist and petrologist Charles Lesher from Aarhus University in Denmark.

And that sort of knowledge is really important. It can help us interpret seismic images in the deep mantle and allow us to model how chemicals and heat rise and fall between Earth's layers.

Using computer simulations, the authors were even able to show how this core material can make it all the way up to Earth's surface, with heavier isotopes essentially hitching a ride on the upwells of a hot mantle plume, like those found in Samoa and Hawaii - a possible signature of Earth's leaky core.

A study published last year suggested something similar. Its authors found core material - in this case, tungsten isotopes - were also transferred to the surface via ascending mantle plumes and that the core has probably been leaking this material for the past 2.5 billion years or so.

Lesher says his results also suggest iron isotopes from the core have been leaking into the mantle for billions of years. But if exchanges like this are actually happening, the question then becomes: What is the impact over the long run?

Right now, no one really knows. The new simulation only shows that a leak from the core to the mantle under high temperature and pressure is possible, and it could explain why mantle rocks hold so much more iron than meteorites: in short, the iron liquid is coming from the heart.

The authors admit there's considerable uncertainty in some of their model's parameters, like diffusion, thermal conductivity or the amount of core liquid that's actually infiltrating the mantle. The numbers chosen may not represent the reality of the situation.

Nevertheless, the exchange of iron isotopes across the core-mantle barrier by thermodiffusion appears more than capable of iron-ing out our mantle, so to speak.

"This does not preclude other processes but simply shows that thermodiffusion is a plausible agent of isotopic fractionation in the region of the [core-mantle-barrier] on geological timescales," the authors conclude.